Yes, the Arch grounds are separated from downtown St. Louis by a sunken Interstate 70. And every urban-minded do-gooder (the Urban Workshop included) has publicly and privately called for a lid to be built over the three central blocks connecting the Gateway Mall and Jefferson National Expansion Memorial (the Arch). Those of us who are maybe overly optimistic call for the full removal of I-70 from dowtown after the new Mississippi River Bridge is built.

Well, I take it all back. It would be wonderful if we weren’t addicted to urban Interstates and 10’s-of-millions of dollars for a three-block lid would be great, but neither are likely to be completed soon. So what to do? When our infrastructure falls into disrepair we often seek to reinvent the proverbial wheel, often with great waste. Why not just make the existing pedestrian connection better?

The two aerial images below are of the same scale and show that the pedestrian challenge in St. Louis is much less severe than that in Cincinnati. However, the experience of walking from 3rd Street to 2nd Street above I-71 is pretty pleasant. Of course the original plan for Fort Washington Way in Cincinnati included putting a lid over I-71, creating a 1,000-foot tunnel and developing parks above. This may still come to fruition, but if not, what they have done already works well. (check out before and after Fort Washington Way photos at bottom of post)

{I-71 through downtown Cincinnati}

So the new Fort Washington Way is a much larger physical barrier than I-70 in St. Louis. However, it’s not the size of the barrier in St. Louis that is ultimately the problem, it’s the treatment of that barrier. What could we accomplish across three blocks with say $2M? New wider sidewalks? New streetlights? Benches? Plantings? That’s about the current difference between Cincinnait and St. Louis. 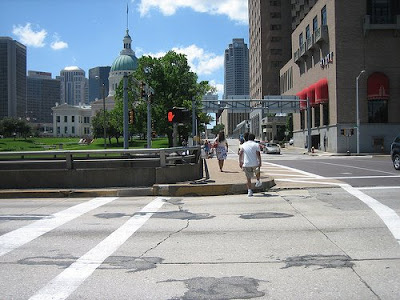 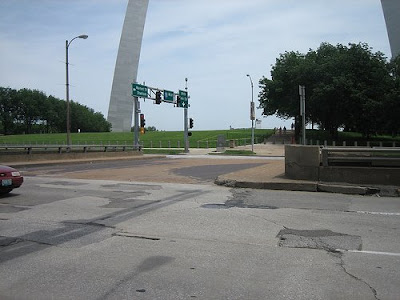 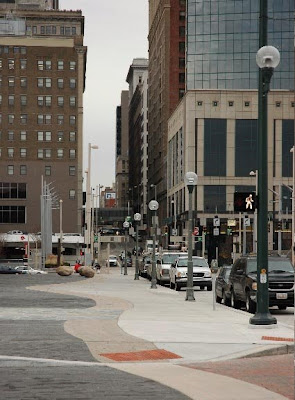 If I can slip back into being a dreamer for a bit I hope that the National Park Service would consider the addition of retail and restaurants fronting the east side of Memorial Drive. If nothing else there should be something to welcome people who do cross Memorial Drive: historical welcome plazas with information, benches and drinking fountains, something. Perhaps consolidating Memorial Drive on one side of the I-70 trough should be explored. Further thought on these will wait for another blog post. 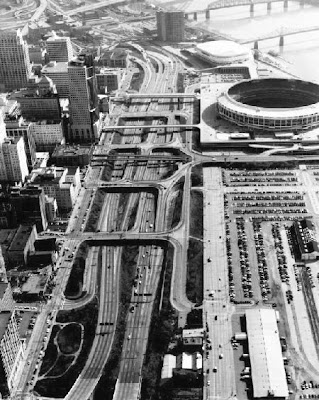 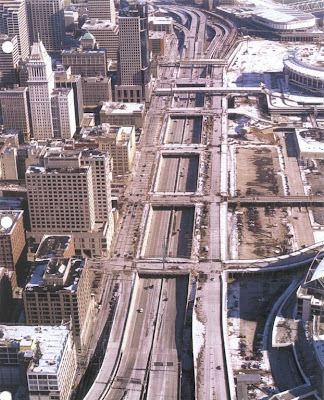