{a HealthLine stop at Euclid and Public Square}

In this post I will focus on the ride experience, ticketing and general thoughts regarding the HealthLine. Finding a stop and purchasing a ticket could not have been easier. Leaving my hotel I could see several stations. Once at a station I found the fare vending machine easy to use, just select the type of ticket you want to purchase, slide your credit card and you’re ready to go. The fare machines also accept cash and validate already-purchased passes.

The stations provide covered seating for 2-8 depending on the size of the station and impart a permanence to what otherwise could be just a simple bus-stop sign and maybe a bench. BRT or no, the stations are a good model for bus stops. Inside each station is an emergency phone, similar to the blue light phones found on college campuses and sometimes in parking garages. You also find a fare vending machine at every stop, no need to wonder where to buy a ticket or whether you have cash. Very nice.

{a typical median BRT station on the HealthLine}

{another view looking west at the same station}

The ticket is validated at the time of purchase and there is no need to scan a ticket or show it to the vehicle operator when boarding. Cleveland RTA security personnel conduct checks for valid tickets in a very similar manner to St. Louis’ Metrolink. This allows passengers to enter the vehicle at one of three entrances. The vehicles are low-entrance and only a slightly higher curb is needed to provide level entrance. This is especially important for strollers, bicycles and wheelchairs. On my ride I witnessed one stroller enter and exit a vehicle without much trouble, though not as seamlessly as typical on a light rail car. 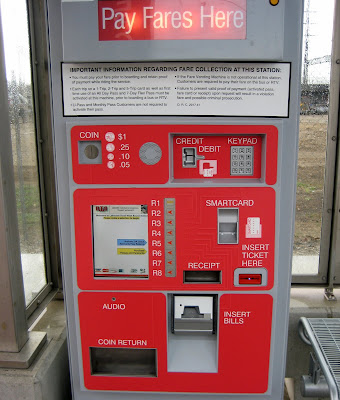 Finding a stop and purchasing a ticket were pleasant experiences, but the ride itself is another story altogether. It’s a bus. The ride was no more and no less. This was a big disappointing, but not unexpected. The real disappointment was in the lack of priority given at stoplights. The short video of a ride on the HealthLine shows the vehicle stopping at two consecutive stoplights.

Bus-only lanes are present on roughly the western half of the line. After 107th Street (Stokes Boulevard) stations move from median stations serving both east and west bound vehicles to more basic curbside stations. There is a signal specific to the BRT where bus-only lanes and median stations are present. The light displays a horizontal white line for “stop” and a vertical white line for “go,” but it wasn’t apparent that this arrangement prioritized the HealthLine, but rather served to reduce any confusion between the BRT lane and the left-turn lane used by other vehicles. 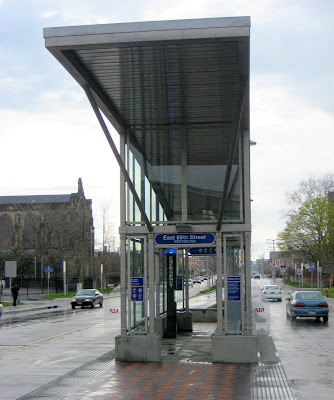 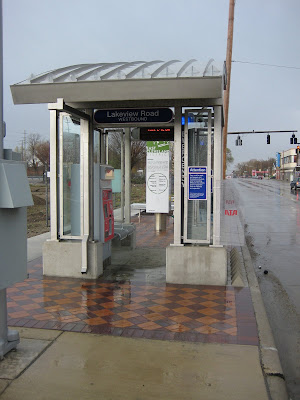 I rode the HealthLine from Public Square to 123rd Street and found it rare that the vehicle was not stopped by a red light at an intersection. With red lights and stations every 0.10 mile, the vehicle traveled slower than cars and trucks in normal lanes. This experience would not encourage me to travel the HealthLine. In this regard there is no apparent added benefit above and beyond a standard bus.

View the two immediate previous posts for video of a BRT stop and ride.