Cleveland's Euclid Corridor project has a new name: the RTA HealthLine. I was in Cleveland recently and had a chance to ride the new Bus Rapid Transit (BRT) system. BRT is an alternative that bridges the gap between light rail and traditional buses. The system is often characterized by the following: bus-only exclusive right-of-way, priority treatment at signaled intersections, high frequency of service, off-vehicle fare collection, level boarding and enclosed stations. There are variations and more basic information can be found at BRT on wikipedia.

Specifically, the Cleveland RTA website states, "The idea of the Rapid Transit System is to provide the quality of rail transit, while benefiting from the flexibility of buses." In this post I’ll be looking at the vehicles used, the HealthLine stops and the route chosen in Cleveland. The next post will focus on the ride experience, ticketing and general thoughts and a third post will focus on whether BRT should be considered for St. Louis.
More…
The vehicles themselves are almost sexy. Well, they are brand-new and give off a bit of that new-shoe magic, otherwise they’re just slightly longer buses. The hybrid diesel-electric vehicles are 62 feet long and burn low sulfur fuel. Each vehicle can accommodate 47 seated riders and 53 additional standing. The low platform entrance functions quite well and very little is needed in terms of infrastructure at stops to allow level boarding.

{vehicles at a stop on Public Square}

The stops are covered and all have an emergency phone, a fare vending machine that accepts cash and credit cards, as well validates pre-purchased passes, and a real-time display of the next arriving vehicle. It happened to be raining while I was in Cleveland and the covered stops were very welcome. 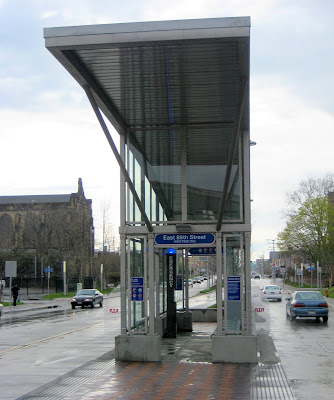 {a typical stop along Euclid Avenue}

There's no doubt that that buses are more flexible than light rail, however this can be a negative as well as it provides less assurance to developers that mass-transit will be present in the future. The HealthLine connects the central business district (CBD) with the employment center of the Cleveland Clinic and University Hospitals as well as the cultural attractions of University Circle and Case Western Reserve University. Despite being Cleveland’s most developed employment corridor, there is substantial opportunity for infill and the line seems to serve both the most densely developed areas while providing opportunities for additional growth.

The downside is that the line connects two employment centers. If one works in the CBD there is likely not a reason to travel to University Circle or the hospitals and vice-versa. But maybe the larger negative is that the line covers a distance of 6.8 miles and includes 58 stops. This means that the Bus Rapid Transit vehicle stops almost every 0.10 miles. This is nearly every block as the north-south numbered streets do not all cross Euclid (105th Street to 107th Street is one 640-foot block for example). 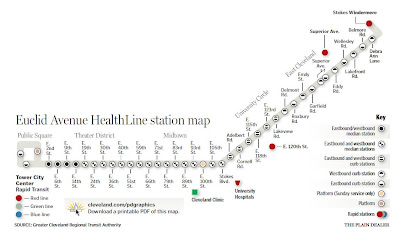 Accessibility is great, there’s a stop on every corner, but in practice this means that the vehicles are slowed greatly and looking down Euclid a passenger can see six and sometimes more stops looming in the distance – not a welcome sight. There should be half as many stops, or fewer. Just because it is less expensive to build a BRT stop does not mean that one needs to be built every 0.10 of a mile.