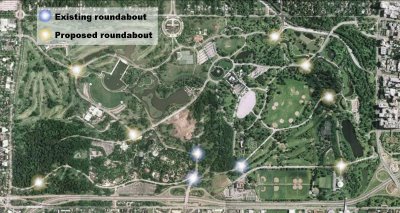 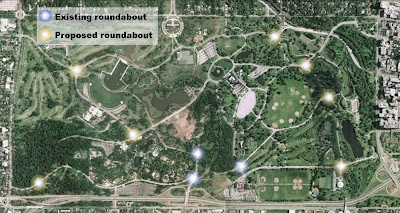 Having spent time in both Australia and Italy and having spent quite a bit of that time on a bicycle I love roundabouts. Originally developed and put to use in the first years of the 20th Century, roundabouts are being introduced to Forest Park. I hope that their use is expanded throughout the park. There are a number of existing intersections that would benefit by being reconfigured as a roundabout.

The largest roundabout at the Hampton Avenue entrance to Forest Park is being constructed now as part of the I-64 project and has been detailed here in an earlier post. Additional roundabouts should be considered for the intersections highlighted above. Of course it would be great if roundabouts would move out of the park and into the city. 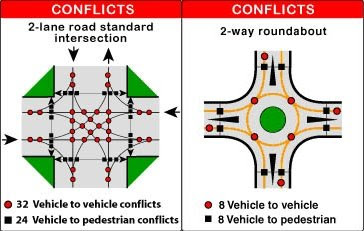 Slowing traffic especially benefits pedestrians and cyclists as the likelihood of serious injury or death increases exponentially with the speed of the colliding vehicle. And although traffic is slowed, the average time for a vehicle to pass through the intersection is reduced. This would be especially true within Forest Park where many intersections impose a “stop-and-go” penalty whether or not other vehicles are present.

Not sure if roundabouts are really safer? There’s a lot of information out there, but if you want more you can click here, here, here, here and here.