[Thanks to Jeramey at Urban Milwaukee for this post. Take a moment, click on the link and check out the great things going on in Milwaukee.]

Busch Stadium is located in downtown St. Louis. Almost every seat in the stadium has a view of a part of the skyline and the Gateway Arch. The stadium is currently bordered by a few surface parking lots, garages, and hotels. A few of those surface parking lots will become buildings as the mixed-use Ballpark Village is developed. There are numerous hotels within walking distance of the stadium, many closer than the surface lots of Miller Park. The St. Louis light rail system, Metrolink, runs right by the stadium with a stop conveniently labeled “Station” within a stones throw. I-64 is immediately adjacent to the stadium. 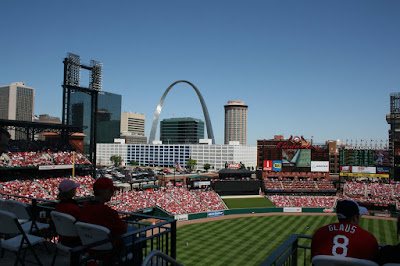 {the St. Louis skyline is easily visible from almost every seat in the stadium}

Miller Park is located three miles west of downtown Milwaukee along I-94. The stadium is surrounding on literally every side by surface parking lots, some stretching as far as a half mile from the stadium. If the roof is open, and you’re in the top level of the stadium, there is a chance you could catch a glimpse of the US Bank Center, the tallest building in Wisconsin. The nearest attraction is the Potawatami Casino, and there isn’t a hotel within walking distance. The 90 bus line runs from Downtown starting two hours before the game, but must contend with traffic waiting to park once it leaves Wisconsin Avenue. 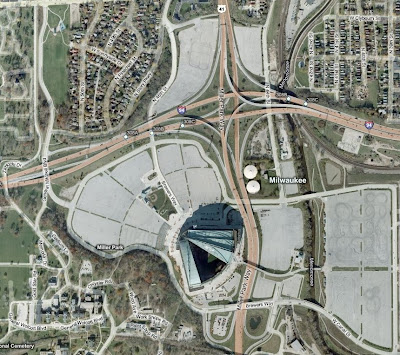 Busch Stadium had a final cost of $365 million when it opened in 2006. Of that cost, $45 million (12%) came from a long-term loan from St. Louis County. Private financing came in the tune of $90.1 million in cash from the Cardinals, $200.5 in bonds paid by the team, and $9.2 million in interest earned on the construction fund the Cardinals held. The stadium has a seating capacity of 46,861 and is owned by the St. Louis Cardinals. The stadium does not have a roof, or its own named expressway. I was unable to determine who paid for the cost overruns of $20.2 million.

Miller Park had a final cost of $400 million when it opened in 2001. The Brewers owners (led by the Seligs at the time) paid for 22.5 percent ($90 million). The taxpayers of Milwaukee, Racine, Waukesha, Washington, and Ozaukee Counties are still paying (with a 2014 estimated ending date) a 0.1% sales tax to cover 77.5% of the costs ($310 million). The stadium has a seating capacity of 43,000 and is owned in a partnership between the Southeastern Wisconsin Professional Baseball District (64 percent) and the Milwaukee Brewers (36 percent). The stadium features a fan-shaped retractable roof. The location of the stadium necessitates the construction and maintenance of Miller Park Way and the interchange with I-94, an expense I’m not sure is fully internalized in the cost of the stadium.

The most obvious difference between the two ballparks is the percentage of public financing. Busch Stadium was 12% taxpayer funded, Miller Park was 77.5%. Why was this? The biggest aspect appears to be the team’s ability to pay. The Cardinals had been banking money for years for a new stadium, while the Brewers, led by Bud Selig, did not have nearly the ability to pay what the Cardinals did. Ironically, the Brewers were able to obtain the retractable roof, despite having less money to start with than the Cardinals. The second most important factor in the funding for Milwaukee’s stadium appears to be the elected leaders, who were willing to go along with the Brewers plan (ultimately leading to a recall election and defeat for Senator George Petak of Racine).

A downtown stadium without a roof could have shaved at least $80 million from the sales tax burden, as the city could have offered TIF financing at least near $30 million and the retractable roof’s cost of $50 million would have been eliminated. 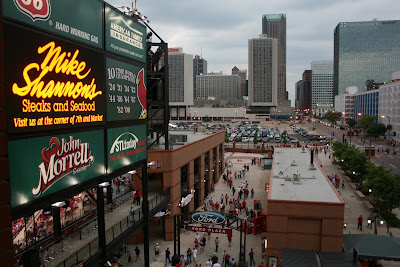 As mentioned, Busch Stadium is next door to the Stadium Metrolink light-rail station, with connections to the airport, Illinois, and western St. Louis. The station platform is packed after games, but I was unable to find ridership figures or estimates for gameday traffic. The system itself handles about 60,000 riders a day. The station is located along a standard route, encouraging familiarity and predictability with taking public transit to the stadium. Unfortunately, a bus wasn’t anywhere to be found during my stay in St. Louis as a referendum was voted down in November and as a result bus service was reduced by nearly a third. 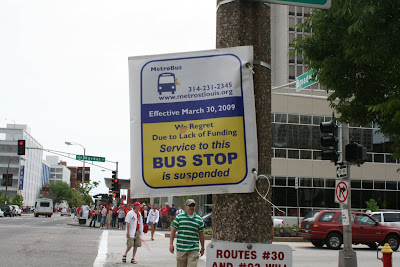 {a sign announcing the cancellation of service to a downtown St. Louis bus stop. A frequent sight unfortunately}

In Milwaukee, the MCTS’s 90 bus route serves the bus starting two hours before the game. Having ridden both after a game, there are significantly more people waiting to take the Metro. The 90 bus only serves riders from downtown Milwaukee and along Wisconsin Avenue, unlike the St. Louis Metrolink line. The gameday-only nature of the 90 bus also is rather confusing to many riders who aren’t familiar with the route. The ride into the stadium is also far from smooth, as the bus must compete with stop and go traffic, from automobiles waiting to get into Miller Park parking lots, once the bus leaves Wisconsin Avenue. There are many times where getting out of the bus and walking from the edge of the parking lots would be much faster than waiting to get dropped off at the front doors.

Edge to St. Louis and Busch Stadium for frequency of service, quality of service, areas for rides to originate, off-bus ticketing (a problem on buses for visitors), and predictability/reliability of service.

Both stadiums are readily accessible by car. Milwaukee is clearly more accessible by motor vehicle by virtue of the fact that there is nothing around it, making it ease for riders to find the one interstate exit to the stadium (conveniently labeled Miller Park Way). Busch Stadium is served by multiple exits, but the large number of one-way streets in downtown St. Louis seem to induce rush hour congestion where none needs to be. Overall, the traffic flow near Busch Stadium, despite the massive amount of pedestrian traffic, seems to flow just fine. 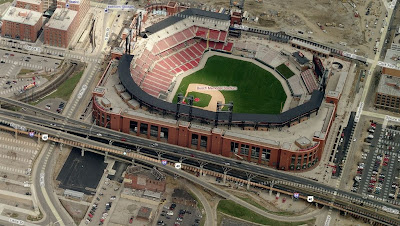 {Ballpark Village will be built at the top of this image, just north of the stadium. Despite the presence of the interstate immediately next to the stadium, Busch Stadium seems less car-orientated than Miller Park}

What does each do for businesses, both nearby and far away?

Busch Stadium provides obviously a large boost for the hotels in the surrounding area, perhaps more measurable than Miller Park because of the immediate proximity. There are also numerous vendors selling goods outside the stadium, something you don’t see at Miller Park. On the flip side, grocery stores across the state of Wisconsin benefit marginally from the food sales generated by tailgating.

Numerous Brewer fans end up on Water Street and Bluemound Road after games, but not in the numbers that Cardinals fans show up in Laclede’s Landing to drink their In-Bev beers.

Perhaps the most disappointing aspect of Busch Stadium was the lack of restaurants near the stadium. There were a couple, but not in the number I would expect an urban stadium to bring. Nothing like what is visible at Wrigley and Fenway. Ballpark Village will hopefully ignite a process that brings a large amount of street level retail to the area.

Parking is the biggest difference between the two. At Miller Park almost every parking stall by the stadium is controlled by the Brewers and your money goes directly into their coffers. In St. Louis, a wide diversity of ownership is present near the stadium. The result? A diversity of pricing options, and light competition that works to keep prices down somewhat. Similar to how things are with the Bradley Center in Milwaukee. 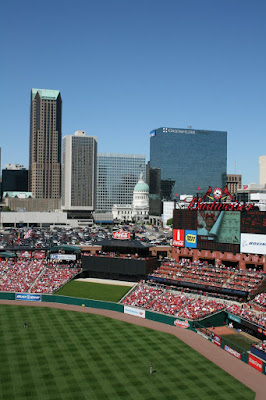 {Ballpark Village will be a nice addition to the area around the stadium.}

Coining a new term specifically for this article, “tailgateability” is the measure of the ease of eating out of the back of your car an area provides. Miller Park wins, but really not by a lot. At Miller Park, you can fire up your grill at any parking stall, in St. Louis this is possible for a lot of the spots, but far from all of them.

This brings up an important point though, is tailgating possible at urban stadiums? Certainly it is. There is no reason why the roofs of parking garages and select surface lots couldn’t be sold at a small premium to tailgaters. In Milwaukee shuttles could run between numerous areas like the lakefront parking lots and Summerfest lots to accommodate even more tailgaters. Also, grills could be installed and public plazas could be constructed (or actually used) that would accommodate tailgaters. 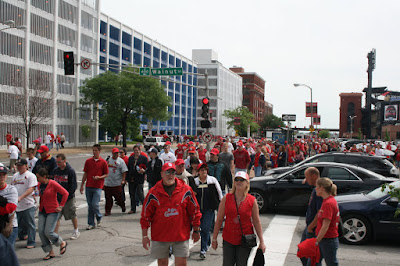 {fans take to the streets after games as the street grid distributes them across the city. Cars are more confined to a lot of one way streets}

Each stadium has features that make it an enjoyable place to watch baseball. The roof at Miller Park is nice, but was the $50+ million price tag worth it? You could argue each way.

The location of Busch Stadium is much more enviable than that of Miller Park and leads to a number of efficiencies. It’s underdeveloped at this point though, Ballpark Village’s development is a must. St. Louis has a great asset in the stadium, and a fair number of buildings nearby that work well with it. Adding more mixed-use buildings nearby will greatly improve the downtown and build a true 24-hour neighborhood.

The fact that so little of Busch Stadium was paid for with taxpayer dollars is a plus. Having a winning culture that sold tickets and a slightly bigger fan base helped put the team in that position though. Consequently though, it did appear that every piece of food at the stadium cost a dollar more. Pick your poison, although I’m sure most would choose the private funding.

Building Miller Park in downtown Milwaukee was studied (drawings included below), but there was likely a hidden cost to that. Would Milwaukee have been to eliminate the Park East Freeway if the stadium was to be near the end of the freeway stub? Probably not. Suburban opposition to such a proposal would have been a lot stronger.

At the end of the day, not building the new stadium in downtown Milwaukee was certainly a missed opportunity. The only beneficiary of its current location is the Brewers themselves. But was it something that downtown Milwaukee needed desperately? No, it’s pretty clear it wasn’t. Milwaukee did miss out on a chance to accelerate all the good things going on in or near downtown though.

This project was commissioned by the City of Milwaukee as a background study in hopes of persuading the owner of the Milwaukee Brewers to locate his new publicly funded ballpark downtown rather than on the suburban fringe of the city. Promoted without success by a New Urbanist Mayor, the City proposed the demolition of a freeway spur on the north side of downtown, and the location of a new ballpark along the edge of the Milwaukee River as part of new neighborhood development at the northern edge of downtown. Parking was to be accommodated by new and existing lots and garages dispersed throughout the downtown area and immediate environs. The Brewers’ owner wasn’t buying it; and the $500M “Miller Field” will open this season in a 20,000-car parking lot west of Milwaukee. 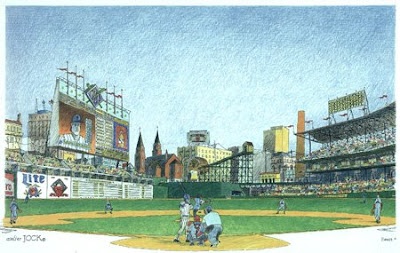 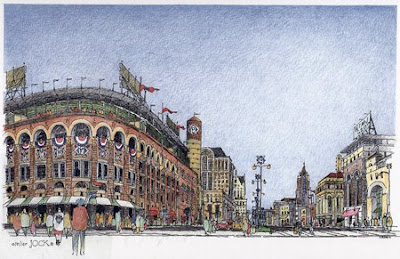 Alex is the founder of nextSTL.com. He earned a B.A. in Journalism and Masters in Public Affairs at Indiana University and has studied in Adelaide, Australia and Perugia, Italy. Alex can be found on Twitter @alexihnen and reached at [email protected]nextstl.com
View all posts by Alex Ihnen →