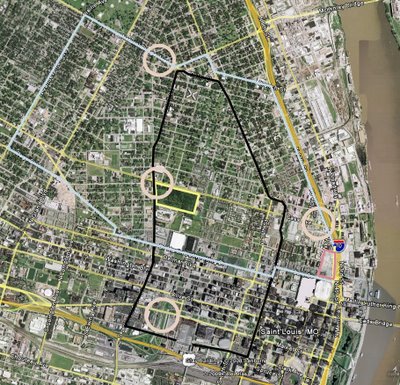 For those of you who love to see maps here’s a quick visual of the North St. Louis project. The information here is all at least second-hand and conjecture, but should give an idea of what we’re talking about.

To add to previous information, the entire project is also being sold as a “green” development. There would be a new sewer and stormwater system, power supplied from biomass gasification, solar panels and wind turbines. Mass transit could run from Union Station up Jefferson, across Natural Bridge and down Florrisant, finding its way back to Union Station. Clearly Federal and State subsidies will play an enormous role in this project if it happens. With green technology, new urban infill and mass transit there’s the possibility of significant federal support.

Other points in brief: the Clemens home would be saved and grounds used as a community park, historic buildings that can be saved will be and imminent domain will not be used. This sounds great, but at this point a lot of damage has been done on the north side by this project and there is little resulting trust that these verbal statements carry much weight.

For the authoritative information regarding Blairmont and the history of this poject visit The World of Blairmont. 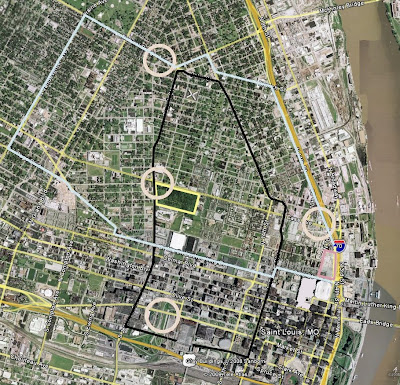 If some of you are still wondering what the problem with this tax credit and vision may be, here are select quotes from a previous story from the Post Dispatch:

But April Ford Griffin, the St. Louis alderman who represents some of the neighborhoods in question, said McKee might have trouble finding support at City Hall. Ford Griffin said she has tried repeatedly to meet with McKee but has been unsuccessful.
“I’m very upset about the whole thing,” Ford Griffin said. “I feel like my community has been raped.”

“The mayor and I have met several times with Mr. McKee,” said Jeff Rainford, Slay’s chief of staff. “He has shown us a vision that is very exciting, but he has not shown us a plan.”

In October 2005, the city sued Blairmont to prevent the further deterioration of the Clemens House – a mansion connected to a relative of humorist Mark Twain. The lawsuit complained that the front of the mansion, bought by Blairmont in 2004, was sagging and separating from the rest of the house. There were gaping holes in the roof, the suit said, and a weakened foundation that was “creating a danger that the walls of the structure will crumble or cave.”

Critics have attacked the proposal for its stealthy path. Initially, it was not filed as a bill, which would have triggered a public hearing where supporters and opponents could debate its merits.
“It was done in the dark,” said Sen. Joan Bray, D-University City.
Only after it had been attached to the broader bill did the House hurriedly hold a hearing. Slay and Dooley sent aides to praise the plan.