The St. Louis Beacon has a slideshow featuring the Landmarks Association of St. Louis, Inc. Most Enhanced Awards. These are amazing examples that everyone should see. The next time that someone tells you that a building can’t be saved just send them a link to the following. 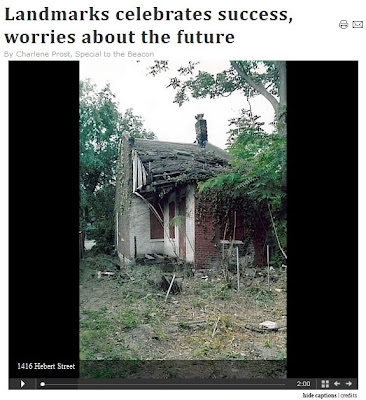 Click here for story
1. 1416 Hebert St., two historic houses, one dating back to 1880, renovated by James Cox and Luz-Maria Evans.

3. Irving School, a public school at 3829 North 25th St. dating back to 1871, renovated for housing by Tim Wolf, Tim Person and Ken Nuernberger.

5. Forest Park Hall, built in 1908 as a lodge hall with commercial space at 4512 Manchester Ave., renovated by Sitelines and Renaissance Development.

10. The Power House, built in 1927 at 1100 Clark Ave. to generate steam for nearby municipal buildings, renovated by Cannon Design as its office.