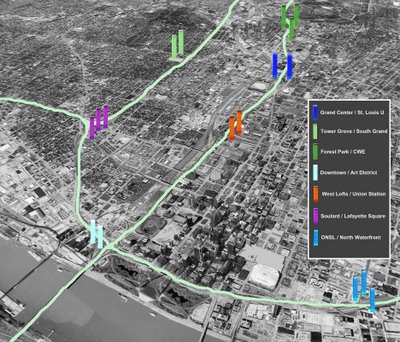 The Arch is a grand landmark, but it’s only marginally useful in telling us where we are in the city. You can see it from parts of Forest Park and you know you’re looking east and you know approximately where the river runs. You can see it from the south on I-55 and know when you’re getting close to downtown. Barnes-Jewish Hospital is useful from the south and west to help located Forest Park and the Central West End. A number of useful landmarks exist in St. Louis, but too often the places in between are “placeless.”

{placemaking with lighted towers at LAX}

Where is the entrance to Grand Center and St. Louis University from I-64? Where is Soulard? How do I find Tower Grove Park? I believe that enhancing the sense of place in our central city would help orient visitors and provide residents with meaningful landmarks. The city once did this with water towers and three fantastic examples can still be seen in St. Louis. Church steeples have played similar roles in defining a neighborhood or parish.

The light towers would serve as gateways to nodes in our city. Landmarks such as these are instantly more memorable than highway signs. Signs hold zero interest. Think of your last trip to Chicago. Do you think, “There’s always a good place to park if I turn onto East Jackson Boulevard.” or do you remember that if you turn just after passing Buckingham Fountain there is a parking garage that always has spaces available? Instead of telling someone to look for the “Hampton Avenue” sign you could say, “you’ll see the green towers for Forest Park then you take the next exit.”

I could go on, but I suppose you get the idea. Sense of place is important for visitors and residents alike and St. Louis would benefit from some creative thinking as to how to better define places in our city. 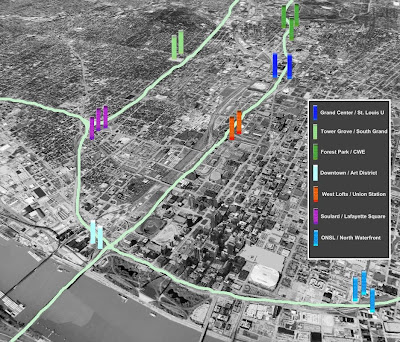 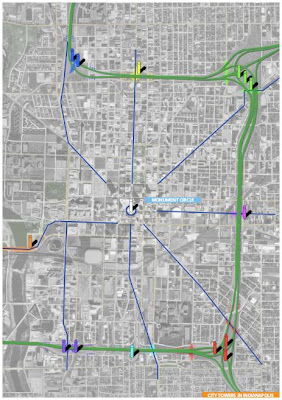