{it’s Oklahoma City, but it might as well be Tucker or Market}

St. Louis streets are fat, obese, HUGE! They are literally squeezing the life out of downtown. When 900,000 people were driving their 1954 Fords to and from work in the CBD each day I understand the pressure to provide capacity. Today? It’s simply ridiculous. Much the same way that WalMart parking lots are purposely built to accommodate Black Friday crowds, our downtown streets are built and maintained to cater to suburban drivers on Cardinals game days.

Nearly all downtown streets are too wide and the pedestrian experience needs to be improved in many places, but I’m going to focus on the Gateway Mall as this is supposed to be a destination. Walking east to west along Market Street from Tucker to Union Station a pedestrian is required to cross 36 lanes of traffic in eight blocks. These 36 lanes account for 533 feet of the total 1,996 foot distance. Why the hell would anyone want to take that walk?

Urban planner Jeff Speck is currently consulting on improving the pedestrian experience in Oklahoma City might as well be talking about St. Louis: “To be walkable, a street needs to be safe, comfortable and interesting,” Speck reported to OKC. “You guys lose it at safe.” “Then you look at the traffic counts, and only a few carrying 10,000 a day. And 10,000 cars a day is easily handled by a two-lane road.”

The St. Louis Gateway Mall Master Plan released by the City of St. Louis features some good ideas and seems to recognize the need to make the pedestrian experience better, but it fails to make any change that would significantly alter that experience. The focus appears to be on things like an “urban trellis” and similar props. Very few people are going to be drawn across 500 feet of asphalt because there’s an “urban trellis” on the other side.

(1) Let’s make downtown a nice place to walk. (2) People will walk there. (3) Pedestrians will need amenities. (4) If pedestrians want an urban trellis we can build one.

Including parking and turn lanes Market Street should be no more than six lanes; North-south streets should be no more than five lanes and every block should have a bump-out, further decreasing the distance between blocks. North-south streets should have raised crosswalks and be entirely eliminated wherever possible. With a pedestrian bridge over 18th Street there could be an uninterupted 1.5 mile walking/jogging loop. 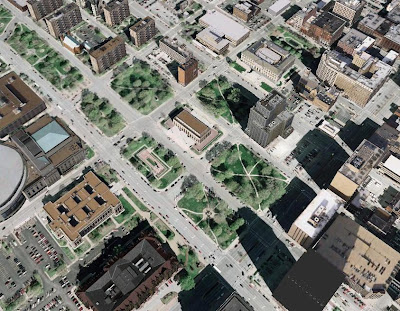 {Gateway Mall west of Tucker as it exists today} 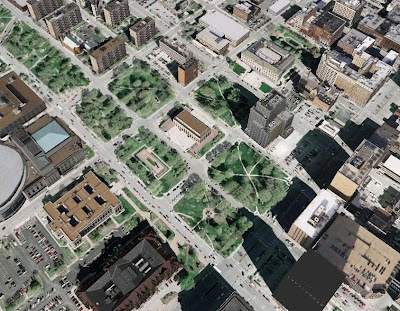 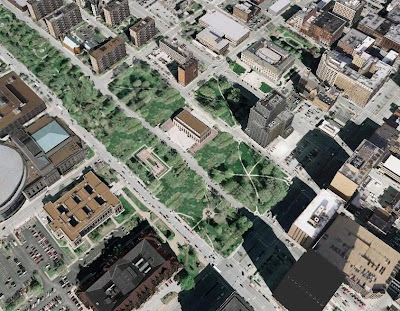 {the Gateway Mall as a usable park}