The intersection of Hampton Avenue-Concourse Drive and Wells Drive on the south side of Forest Park has been the site of more pedestrian/bicycle/automobile conflicts than any other area of 1,300 acre Forest Park. With traffic exiting and entering I-64 and entering the park from Hampton Avenue, this was the place a runner or cyclists could count on having to stop.

The almost six-mile recreation path around Forest Park is remarkably absent of major conflict areas, there’s Forsyth and DeBaliviere and Union to name the other busy areas, but it’s relatively rare to have to stop at any of them. The new tunnel at the Hampton entrance will remove the worst of these. The newly paved path is twice as wide as the existing path and is very welcome in the area near the tunnel, perhaps this is a preview of widened paths elsewhere in the park, but I doubt it.

{a view of the approach from the east}

{a view from the east}

The new entrance also brings a roundabout for entering motor traffic (and bicycles on the roads). This is a very welcome addition as well, is more practical and more safe than the currently configuration. Where possible, auto traffic should be lessened and pedestrians and cyclists should be given priority at intersections. Although sometimes necessary, I do not like removing pedestrians from the streetscape.

I would like to see nearly all roads within the park narrowed and entrances constrained to show all park users that this is a place for people and not cars. I’m sure a traffic engineer would quickly tell me that a smaller intersection couldn’t handle existing traffic during peak times, to which my response would be, “good, we shouldn’t encourage existing traffic and we shouldn’t build our roads only for peak use.”

{a closer look at the new tunnel and path}

{a view of the approach from the west} 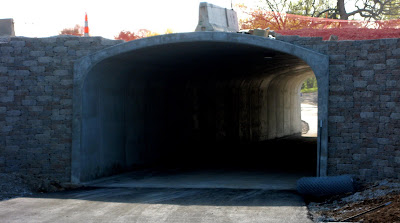 {a closer look from the west}

[Special thanks to my lovely wife for bringing the tunnel to my attention (she uses the running path much more than I do). This post’s for her!]