In addition to the new Forest Park Southeast footbridge two new tunnels are under construction that would provide options for pedestrians using the park. The first replaces the tunnel near the horse stables and playing fields across from the St. Louis Community College. It will be substantially closer to Kingshighway and is east of the Science Center overpass. The second was unknown to me until recently and I hope to have some photos of it soon.

{the new interchange, footbridge and tunnel}

{the new tunnel across from SLU High and the Science Center}

The current tunnel needed replacing and I welcome the pedestrian amenity, but wonder if a skywalk paired with the Science Center overpass wouldn’t have been preferable (maybe cheaper). Spiral access ramps could have added a dramatic visual.

The tunnel (and footbridge) are meant to serve as pedestrian alternatives to existing roadways. This likely means that other options will be less pedestrian friendly than they should be. Better pedestrian accommodations on Oakland and the Hampton and Kingshighway overpasses would serve more people and are needed regardless of other access. Let’s hope the tunnel feels short, is well lit and well traveled. 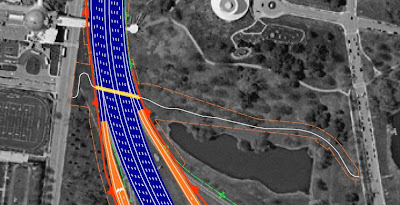 {the new path connects to the existing path}

{the north entrance to the old tunnel} 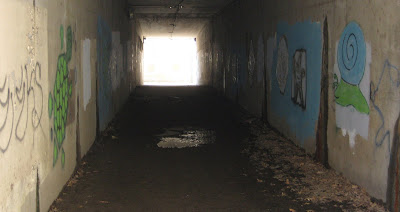