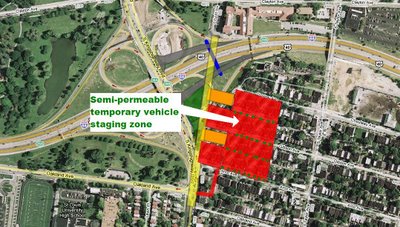 The plan to build a Drury Hotel in the Forest Park Southeast neighborhood took an unexpected leap forward yesterday. At a Gibson Heights Neighborhood Association meeting Tim Drury presented an updated development plan showing a previously unannounced Phase III and a revised site plan for the already proposed towers.In a presentation filled with surprises, the most unexpected development was announced by Mr. Drury, “We currently have under contract 28 homes on the 4500 blocks of Chouteau, Gibson and Arco. As far as I’m concerned we are ready to break ground as of yesterday.”

The 28 homes represent a far larger number of acquisitions than previously known. The previous number was never certain, but was understood to be 4-6 residences. Although past presentations have been met with mixed reviews by neighborhood residents, several homeowners once opposed voiced enthusiastic support.

“It took me awhile, but I just realized that it will be pretty easy to sneak into the pool. And Tim said I could pick up a bag of free popcorn any time I want.” said Linda Younger, a resident of the 4400 block of Gibson Avenue. “I’ve lived here 18 years and no one’s ever given me free popcorn.”

Phase III is a “semi-permeable temporary vehicular staging zone”. Mr. Drury declined to label it a “parking lot” and carefully made clear that the zone would have “several ornamental trees” and only service those who choose not to drive into a “a dark, hidden parking cave” when staying at the hotel. He explained that because the property is nearly ½ mile from the nearest Metrolink station and the same distance from Forest Park, customers will obviously be driving to the hotel.

The “semi-permeable temporary vehicular staging zone” necessitates the taking of the additional 22 homes. Demolition had been a main concern of neighborhood residents at previous meetings, however, as Tony Sevino, a resident of the 4500 block of Arco explained, “When someone comes to your door with a briefcase of cash, literally a motherf*!#ing’ Samsonite briefcase full of dead presidents, whatcha gonna do? Straight.” 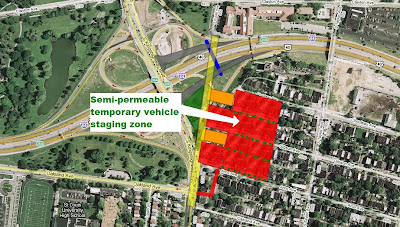 Present at the meeting was Claudia Stevens, a neighborhood resident and organizer of the successful City Parks ballot initiative, requiring a public referendum to develop any city park land, “Thank God we’ve saved the greenspace at the southeast corner of the new interchange. All those who will take their children there to fly a kite, picnic and watch the lights cycle through at the new single-point interchange owe me a debt of gratitude. That grass was once part of Forest Park you know?” 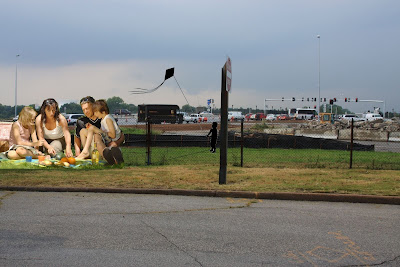 Mr. Drury insisted that the demolition of additional homes would not have been needed if the hotel towers and “semi-permeable temporary vehicular staging zone” had been permitted to build several hundred feet west on the land Stevens effectively saved. Stevens claimed it’s a more than fair trade, “It’s a little sad to see so many homes go, but you can always build new 1905 homes, just look at Botanical Heights. You can’t create new greenspace out of nowhere.”

The second item on the agenda for the neighborhood association was the deteriorating state of two pocket parks due to deferred maintenance and the creation of a new “Chouteau Park” in the 4300 block of Chouteau Avenue.

This is an April Fools’ Day post!
(in case you’re reading it after April 1)