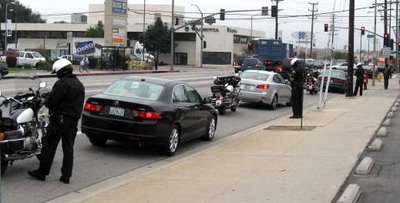 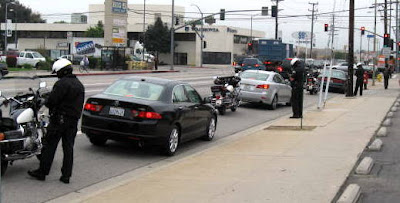 The LAPD recently set up a crosswalk sting at a dangerous intersection in Los Angeles. Plainclothes officers acted as pedestrians and legally crossed the street while a dozen officers were positioned nearby to stop anyone failing to stop for the pedestrian. Officers will pulling over up to four cars at a time and the plainclothes officers got plenty of rest as they waited for the uniforms to write tickets and get back into position.

Given that our roads are much wider than they need to be and pedestrians often need to keep a good pace simply to cross a street at all, where in St. Louis would a crosswalk sting be useful? I’ll offer Forest Park Parkway and Euclid Avenue at the north edge of the medical center in the Central West End. Anyplace else?

According to Traffic Division Lieutenant Bryan Parman, the “enforcement mission” came after his office received a complaint via email last week from a nearby resident.

The result? In the one-hour mission, three officers issued 22 citations; five to motor vehicle operators and 17 to people on bicycles. Everyone given a ticket was given the option to attend the Share the Road Safety Class so it won’t affect their driving record (that option can be given only at the discretion of the officer who issues the citation).