Virginia has decided that all new residential developments must be connected by road to neighboring subdivisions, schools and shopping areas. According to the Commonwealth, the new rules are meant to improve safety and lessen infrastructure expenditures. The well-heeled argument is that cul-de-sac roads funnel traffic onto secondary roads, overloading them and forcing municipalities to continually rebuild and add capacity to handle ever more cul-de-sac communities. In addition, social services incur additional cost to service such communities.

Read the full Washington Post story here
As you can imagine the new rule has its critics. ” “Cul-de-sacs are the safest places in America to live,” said Mike Toalson, executive vice president of the Home Builders Association of Virginia, which opposes the new rules.” Thanks Mike, but this statement is akin to “the safest thing to do is to never leave your livingroom couch.” Afterall, how many people are involved in a traffic accident while sitting on their couch? It ignores every negative externality that doesn’t affect the individual in question immediately.

Just one quick expample illustrates the problem with such arguments: those living on a cul-de-sac drive significantly more than those living on a traditional, urban street grid. This means they are more likely to be involved in a car accident. Is this what Mr. Toalson means by “safest (place) in America.”

Clearly the problem here is that externalities are being ignored by proponents of cul-de-sacs. Several of these have been mentioned above. Those living in the suburbs and on cul-de-sac streets have, in general, bought themselves out of what we think of as “urban issues”: poverty, crime, traffic (at least in front of their home), noise, lack of privacy, etc. I have no problem with this; as long as people are paying the true cost of their lifestyle choice.

If someone would like to live in a cul-de-sac community they should be assessed a surcharge for the following costs (and likely others I am leaving out) that are greater due to their lifestyle choice:

Anecdotally, I grew up in a home on a traditional street grid. The reach the local drug store or video store I had several options, some with more traffic, some with less. It was a tree-lined residental street with sidewalks on both sides. It was safe to walk to the Hooks Pharmacy (now a CVS), the local video store, the library, the bank, the school. 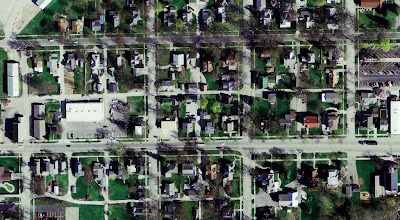 {my hometown neighborhood (same scale as image below)}

My wife grew up on a cul-de-sac. Within the subdivision a pedestrian mixes with parked cars, moving cars and the odd bicyle/stroller/jogger. There are no sidewalks. There are actually several options to exit the subdivision, but the nearest gas station, library, school and bank requires one to walk in the street until reaching the local arterial road with its 40 mph speed limit and often faster traffic. The walk from one subdivision exit has a sidewalk – often too close to the road for comfort – the other exit leaves you walking on the shoulder of the arterial or through front yards.

Of course we now live on an urban street grid that has been transformed into a cul-de-sac. The best of both worlds? I’d argue it’s the worst of both. The street barricades were a common “solution” to crime in the 1990’s in St. Louis as well as other cities. It’s time that they be removed, but that’s a topic for another post. Our current neighborhood offers us reasonably good access options to a bank, library, grocery, etc. But best of all, due to its location and nearby mass transit options we drive less than 15 miles a week, combined. I like to think that the “danger” we’re in by living in St. Louis City is offset by the safety of not driving!

{our current neighborhood (same scale as image above)}

If people are not required to pay the cost of their lifestyle choices individuals are not able to make rational choices and will therefore continue to make every choice based on avoiding real costs whenever possible. Once a suburb becomes “too expensive” to maintain, residents move on to a new development where the building of new infrastructure has been subsidized, once again passing the cost of their lifestyle on to others.