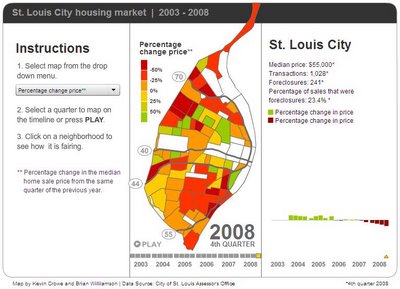 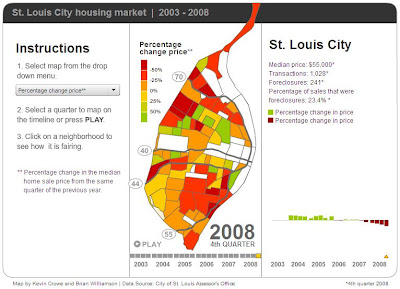 So the Post-Dispatch apparently wanted to jump in on the “housing markets crash” bandwagon and figured they might as well do it in style with a flashy map and a lot of colors. If a reader learns anything more than where some city neighborhoods are, it will be no thanks to the Post-Dispatch.

So presumably the graphic was intended to show the change in housing values in St. Louis City. the preface to the map says in part, “Then the bubble burst, and even though the St. Louis region hasn’t seen the drastic swings of Florida or Las Vegas, many parts of the city got hurt. . . Use the dropdown menu on the map below to track values such as quarterly median sale price . . . ” You’re then invited to “click on a neighborhood to see how it is fairing.” (let’s be honest, someone realized they could find sales records for homes on-line and decided to make a piece of electronic art. Well done.)

Click here for the Post-Dispatch housing market project
The problem is that “quarterly median sale price” for homes is not a valid or instructive way to show home values. So if two multi-million dollar homes sold in the CWE in the third quarter of 2007 but none of that value sold in the fourth quarter of 2008 their map would show a decreased “quarterly median sale price” for the neighborhood. While this is technically correct by definition and I have little doubt that the automotons at the P-D are using correct numbers, it’s irresponsible and lazy. A piece like this should get a grade of “F” in any journalism school in the nation.

To further illustrate the point, numbers for 2007 and 2008 for the Forest Park Southeast and Soulard neighborhoods are shown below. Does anyone believe that home ‘values’ increased 156.8% in the third quarter of 2008 from the third quarter of 2007? Of course this isn’t “exactly” was the Post-Dispatch claims to be saying, but it is very likely what the casual reader would “learn”. Anyone who doesn’t understand statistics better than the Post-Dispatch will be misled.