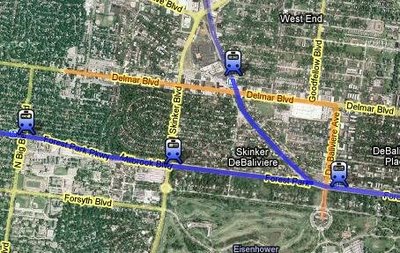 Someone needs to say it: The trolley proposed to connect the Delmar Loop to Forest Park at the history museum is a waste. I loved the idea at first, but it’s a wasteful duplication of the mass transit investment already made. Instead, the Delmar Metrolink stop should be reoriented to face Delmar Boulevard and efforts should focus on extending development east of Skinker Boulevard. 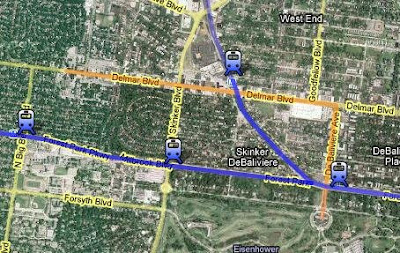 The Loop Trolley has a new website to further promote the idea. A number of statements on the site are dubious. Most notably, the “Other Cities” tab highlighting the introduction of modern streetcars across the country is misleading as the Loop Trolley is not planned to be a modern streetcar line providing new mass transit accessibility. The site even includes ridership of these lines in other cities. This is very misleading. 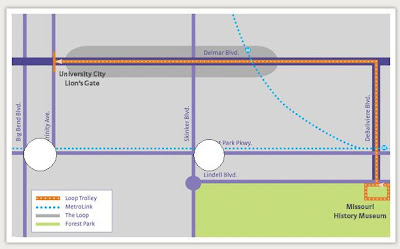 {The Loop Trolley leaves out the Skinker and Big Bend Metrolink stops (shown as white circles), apparently believing that 1/3 mile is too far to walk}

The site also states, “The Loop Trolley will link two existing Metrolink Stations to cultural institutions like the Missouri History Museum, the University City City Hall, and all the attractions in The Loop like theaters, restaurants, offices and shopping opportunities . . . ” First, I can’t imagine that one would ride the Metrolink to the Forest Park stop and then stand to wait for a trolley to take them the final 800 feet to the History Museum. And while University City City Hall is a cool building, it’s not a “cultural institution” people are jonesing to be linked to. An additional point is that these attractions are already well connected. Q: What connects two existing Metrolink Stations better than an historic trolley? A: The existing Metrolink line!

The most analogous system is likely the Market Street Railway in San Francisco, meant in part to be a “museum in motion”. A non-profit effort acquires and maintains the line and cars. Anecdotally, during my last trip to San Francisco I rode the BART, the cable cars and the trolley line and while BART was busy and the cable cars predictably packed, we were often the only people on the street cars. The line travels slowly and only seemed to attract a few tourists. I have no doubt that in the high season tourists are more plentiful.

But back to Delmar: The photos below show just how concealed the current Metrolink stop is. Not only does it not feel as safe as a result, it’s just not visible to people on Delmar. The Wabash Railway building should be made the main entrance/exit. This would provide a functional anchor to the east Loop.

{a direct view of the Delmar Metrolink stop from Des Peres}

There is enormous development potential adjacent to the Delmar Metrolink stop which would not be increased with a trolley. The map below shows development opportunities highlighted in green, a new bus depot in blue and Washington University land in orange. Des Peres should be eliminated and the bus depot moved to the east side of the stop. Further, Enright and Clemens east-west connections should be explored. 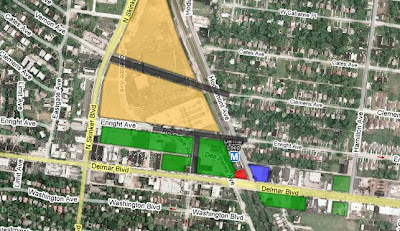 The trolley is a really neat idea. However, development opportunities west of Skinker are very limited, the Delmar Loop is well established and has been recognized as one of the great steets in America. Maybe a streetcar would be icing on the cake, but it’s unecessary. The new Trolley website states that a trolley would “enrich neighborhood ambience and would “be a source of local pride,” “cultivating a delightful sense of place.” These are laudable goals, but in my opinion do not justify the cost of the project.

Washington University students, faculty and staff receive Metro bus and rail passes for free. Many other organizations subsidize passes. As the streetcar would be an entity separate from Metro it would be duplicating a free transportation option for thousands of users.

So for all the criticism, I understand that people enjoy envisioning and enacting their own ideas, but in this case the efforts of Joe Edwards and others would be better spent highlighting existing Metrolink access and developing vacant land on Delmar. I strongly believe that modern streetcars should be brought back to St. Louis, but let’s connect new areas of the city to mass transit. Why not South Grand to Midtown and SLU? Why not ONSL through downtown to Soulard and Carondelet? Or a streetcar on Jefferson?