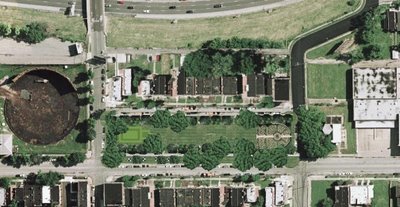 * Since I wrote this post I’ve learned that the entirety of this area MUST become a park per the sales contact with Barnes-Jewish Hospital as part of the renewed and modified Hudlin Park lease. But I spent some time on this so I’m going to post it anyway. A big ‘thank you’ to the “preservationists” who have failed to preserve the neighborhood’s options regarding development. I’m sure you’ll be out helping me pick up trash in yet another FPSE park. (That was sarcasm.) * 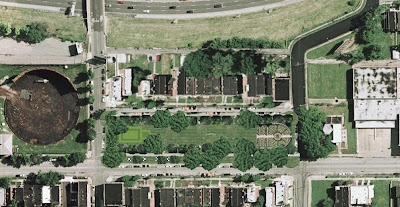 The area south of Donovan (or roughly the south half of the proposed park) is very close to the same size as Louisburg Square in Boston and while the comparisons may end there, putting residential on the north half and a linear park on the south half is worth exploring. Without enclosing the north side of the park one will feel crowded by the Interstate, as if shoved into a corner.

The dimensions of the smaller linear park would be pleasing and inviting, giving the visitor clear orientation and a sense of location. A vaguely square park with an open northern side fails to provide this. Substantial bump-outs at each corner of the park should be larger, extending further into the roadway than their adjacent bump-outs. Looking either east or west down Chouteau, the park should hold a defining place, anchoring what is now a long, wide and open street. This would “push” the park into the neighborhood as though it were reaching out instead of being tucked into the staid block pattern.

Chess tables should sit next to the wide tree-lined east-west pedestrian path through the park, providing for streetside activity. None of the closest parks provide effective amenities for informal community activity or gathering; not Forest Park, not Hudlin Park, not Rainbow Park. Shaded benches and activity tables would be welcome amenities.

Two features should dominate the park itself. An earthen mound (think Cahokia at 1/10 scale, say 10ft at its tallest) at the west end would provide variety in landscape, adding visual interest while serving as a play area for children (and if you’re like me, adults). The mound would potentially provide a stage for music events as well. A geometric garden at the east end would add formality and structure while providing opportunity for community gardening and planting. A sculpture could further help identify the garden as a unique place. Of course the dominant features would juxtapose two St. Louis identities of Native American heritage and the Victorian era. 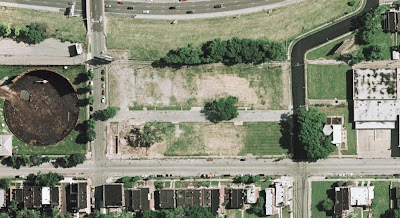 {a current view of Chouteau Park}