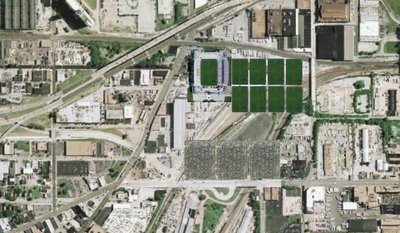 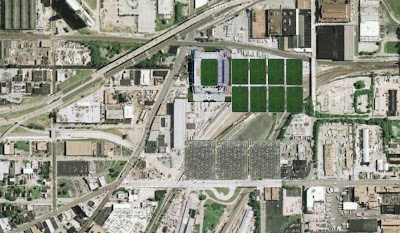 {the dream location of a St. Louis United soccer stadium}

So we’re kicking around ideas on the Urban STL forum about the location for a professional soccer stadium and possibilities run from Collinsville on the east side to St. Charles or Ballwin. Lots of suggestions have been put forth, but there’s one site that is already in the early planning stages of becoming a new park/greenway. The area bounded by Vandenter Avenue to the west, I-64 to the north, the extension of Spring Avenue to the east and Chouteau Avenue to the south is very tentatively slated to become a park at the western end of the Chouteau Greenway linking downtown with Forest Park through the Mill Creek Valley.

This site is large enough for a 20,000+ seat soccer stadium and no fewer than half a dozen additional playing fields with enough space for parking, greenspace and a substantial mixed-use development. The stadium, field and parking images come from the Columbus Crew stadium in Columbus, OH. The site is just 1/3 mile from the planned Sarah Avenue Metrolink stop, less than 1/2 mile from the Saint Louis University campus and located between I-64 and I-44. You simply couldn’t beat the visibility and access.

Let’s build an urban stadium. Why not?