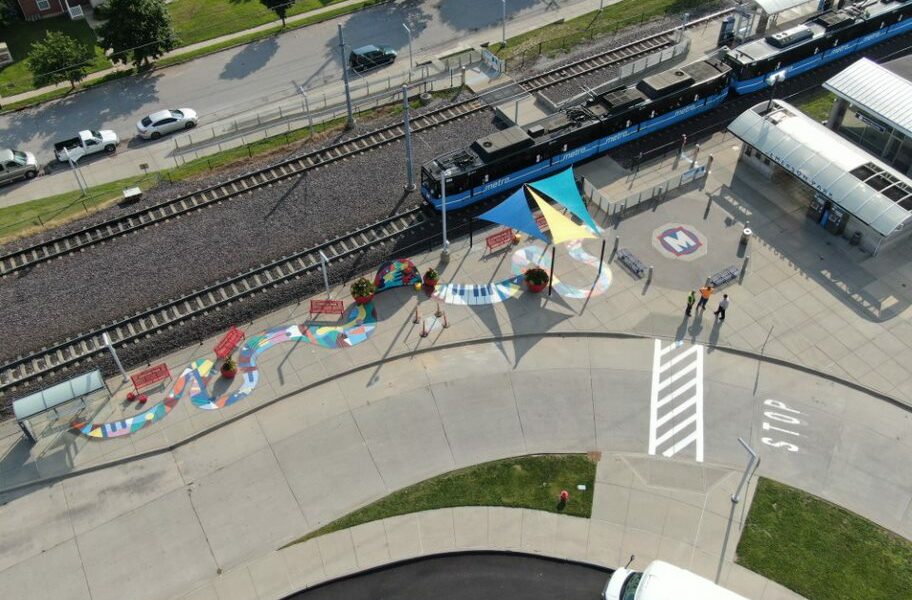 A historically Black city, East St. Louis was the site of the 1917 race riots which resulted in the murder of many African American residents and significant property loss.  For the past 100 years, the City has experienced periods of significant growth and others of substantial decline.  Over the past 20 years, the Emerson Park Neighborhood has been of particular focus, with several new projects transforming the neighborhood to what it is today.  Today, the Emerson Park Station is surrounded by the Parsons Place
project, a more than 200 unit mixed-income housing development, Jazz at Walter Circle, a 74-unit senior apartment building, Neighbors’ Market, a black-owned grocery store, and the Jackie Joyner-Kersee Center just a few blocks away. The Emerson Park Station serves as a major multimodal hub in the St. Louis region, connecting Metro East residents to Metrolink, St. Clair County Transit, and the Madison County Transit bus lines.  Additionally, the station is equipped with a large park and ride lot, making it an attractive transit hub to Metro East Riders wanting to connect to Downtown St. Louis. To further connect the station to the Emerson Park community, the St. Clair County Transit District engaged Citizens for Modern Transit to execute the St. Louis region’s second transit placemaking project.

Over the course of 8 months, the design team led by CBB and PGAV worked with East St. Louis residents, stakeholders, and transit riders to understand existing rider and community needs and design a space that improves the experience for community members and riders.  Over 500 people were engaged through a series of design workshops, rider interviews, pop-up engagement at the station, and online
surveys.  Throughout the design process people spoke overwhelmingly about the desire for more color at the station, shade for the summer months, more seating options, and to honor the history of East St. Louis.

The PGAV and CBB teams went to work designing a space that integrates elements of play to encourage a vibrant community space, while also providing new amenities for transit riders.  In addition, local artist Jayvn Solomon was engaged to create a mural on the nearby pedestrian bridge.  The mural was inspired by the musical theme of the placemaking project and integrated design ideas from local students.

With a limited budget and a tight construction timeline, the space was transformed from a gray, concrete filled blank canvas to one that inspires joy, community building, and play!