Larry Wayne Giles (November 1, 1947 – June 12, 2021) was a pioneering architectural salvage expert and historic preservationist who founded the National Building Arts Center. Born in St. Louis, Larry grew up in the city’s West End neighborhood, Maplewood, and the Los Angeles, California area. He enlisted in the Marine Corps in 1967 and was sent to the I Corps Tactical Zone in South Vietnam. He turned down an opportunity to attend Officer Candidate School and spent much of his time in general infantry before securing an assignment to the Combined Action Program. A helicopter crash ended his military service, and, after a five-week hospitalization, Larry returned to the United States and retired as a sergeant. Larry’s experiences in Vietnam moved him to question the rationale for the war, and he participated in several anti-war protests in the following years.

After his return to St. Louis, Larry volunteered with KDNA, the community radio station that eventually became KDHX. He broadcast many lectures and interviews that he recorded live at St. Louis events, including some by Timothy Leary, Baba Ram Dass, Bernadette Devlin, and Frank Zappa. By 1972, Larry had settled in the city’s Soulard neighborhood, where he became a force in preserving its historic buildings and revitalizing its spirit.

Larry co-founded the Soulard Restoration Group, a neighborhood association, and Soulard Resources, a rehabilitation company. He went on to completely rehabilitate the buildings at 1300 Sidney Street, 2220-22 S. 11th Street, 2410 Menard Street, and the Stahl Stables at 2412 Menard Street (current home to BWorks). In 1973, he founded the St. Louis Architectural Art Company, which filled a vital gap in the salvage space and became one of the nation’s busiest architectural recovery operations over the next thirty years.

After several years recovering materials for reuse by the budding rehabbers of St. Louis, Larry turned his attention to recovery of larger-scale systems of terra cotta, cast iron, and stone, hoping to create an archive of the lost architecture of the city. Larry would recover entire building elevations, and he moved beyond St. Louis to work in Chicago, Philadelphia, New York City, New Jersey, and other places. Cities, architects, demolition contractors, and preservationists alike became aware of Larry’s unparalleled salvage expertise and frequently asked him for help when faced with the otherwise impossible task of dismantling an entire building elevation. These calls continued for the rest of his life.

By 1982, Larry publicly called for resurrecting the plans for a museum of American architecture and building at St. Louis, first proposed by architect Charles Peterson during the Gateway Arch riverfront clearance in the 1930s. Larry continued to amass the core collection for the museum, and in 2002 incorporated the non-profit St. Louis Building Arts Foundation to further the project. By 2005, the Foundation obtained the historic former Sterling Steel Casting Company foundry in Sauget, Illinois for use as a study center, exhibition hall, and library. The site and the project it now housed became the National Building Arts Center, and Larry donated his entire collection of artifacts and his library to the Center.

Alongside that work, he arranged several transfers of New York artifacts from the Brooklyn Museum to the Center, realizing his ambitions for the NBAC to represent a national scope of materials. Larry not only oversaw the vision and administration of the Center, but would be found every day personally laboring alongside others on all tasks needed to bring his dream to life. Larry died in June 2021 from complications of his treatment for leukemia. In his last weeks, Larry was busy preparing for the transfer of “Little Liberty,” a pressed metal replica of the Statue of Liberty currently in the Brooklyn Museum collection. When Little Liberty arrives in the next few months, it will be placed at the entrance to the Center in honor of Larry Giles and his truly epic life.

This Saturday the National Building Arts Center is hosting a memorial service from 4-8:30pm on site in Sauget, IL, featuring a spoken program at 5:00 PM, a video tribute by Matt Amato, tours of the site, art installations by Jennifer Colten and Sage Dawson, and live music by Alan Ames and Jesse Irwin. The event is in some ways a funeral, in some ways a celebration, and in some ways a construction project. Guests are invited to dress as they wish. The event is open to the public although RSVP is required via Eventbright. The main program is to be held outdoors in a covered but not enclosed space. 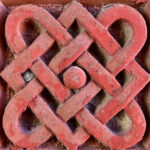 The National Building Arts Center is a unique, emergent study center housing the nation’s largest and most diversified collection of building artifacts, supported with a research library offering broad holdings in architecture and allied arts. The Center strives to use its collections to educate the public on all aspects of the building arts from design to fabrication.