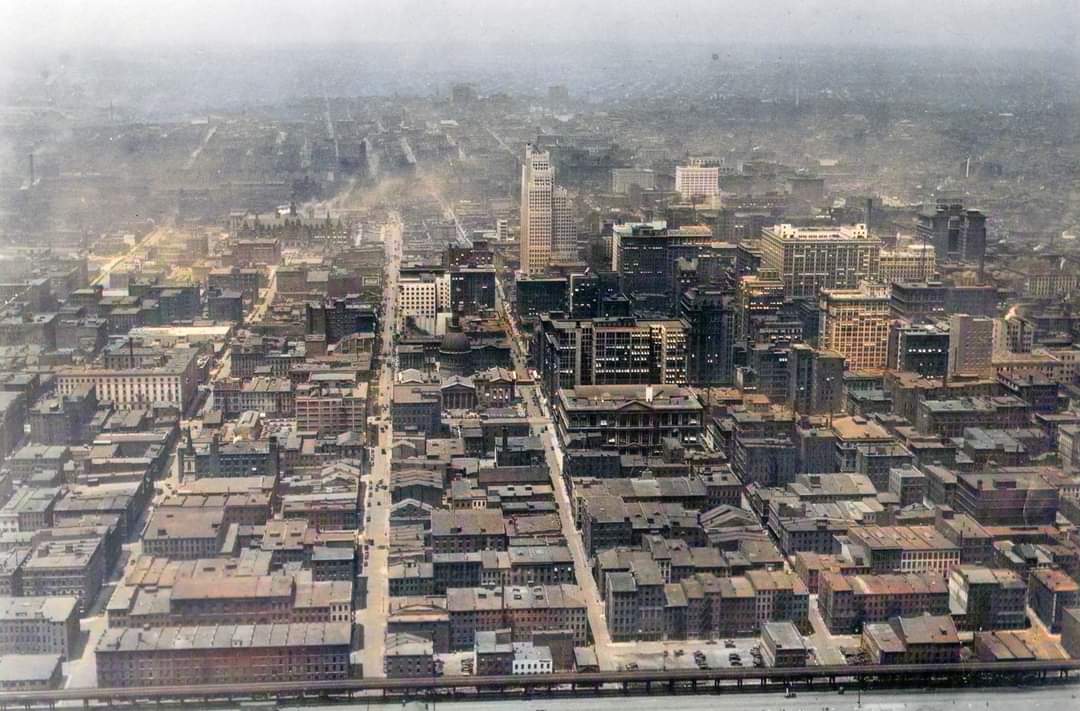 In 1876 when St. Louis was just a little over 100 years old, relatively few people lived west of Jefferson Ave. The St. Louis of 1876 was a city with more population than today, yet transportation technology necessitated compact living. And it worked. But the wealthy had their country estates and the working class fantasized about the idyllic setting away from the city. When electric streetcars allowed the city to spread out, it did quickly. New neighborhoods sprung up all over the city. Still, the efficient public car encouraged dense development.

When St. Louis reached its peak population in 1950, population density was over 13,000 residents per square mile. For comparison, this number is greater than Chicago’s population density today. That should give a general understanding of what the population density looked like. But the swirling winds of social change pushed suburban sprawl and people flocked from the city. Today St. Louis holds roughly 300,000 residents within its 62 square miles of land. Meanwhile, the entire metropolitan area is home to roughly 2.8 million residents. With climate change and socioeconomic inequality at the forefront of our discourse about challenges, please permit a dream where one quarter of the metro population lived within the city boundaries.

If one quarter of the St. Louis metro area lived in the city today, the population of the principle city along the Mississippi River would be more than 700,000. Considering the reduction in household size over the last several decades, this population number would probably mean St. Louis would have an almost equal number of households as it did at its peak in 1950. Looking at population density, St. Louis would have about 11,290 residents per square mile.

Folks sometimes talk about the “Manhattanization” (for lack of a better term) of the central corridor over the next century, and it is important to consider the reality that we already have the population; it just needs condensing. With a population density of 11,290 per square mile, the city would have packed high schools with an abundance of educational resources due to a strong tax base and deep city coffers. A subway system on par with Chicago would be practical to move residents and tourists around the city. The city’s parks would be filled with people enjoying the greenery. The virtuous cycle of a healthy urban population would be a realization. If one quarter of the St. Louis metro area lived in the city today, it would look a whole lot more like the city that was envisioned 100 years ago.

Sometimes I think that a future like this may not be such a distant reality. Other times I think the time it will take to realize such a future is infinite. With climate change a pressing issue, it isn’t hard to imagine a situation where the federal government implements policy to favor the rapid growth of the city at the cost of suburbs with the recognition that migration would be necessary to become better stewards and save the planet we depend on.

Moving back to electric mass transit, more efficient home building, maximizing land use, etc. are the steps we must take. Returning some of the more unsustainable suburbs back to nature would allow man made wounds to scab over and heal. No longer would folks need to risk their homes as they wrestle for land with the Mississippi, a titan that goes where it pleases. Unforced errors aren’t necessary, and we should be smarter than them.

I am hesitant to suggest this of course, as I am well aware of the way that the federal government destroyed communities of color in the mid 20th century, and I understand that many communities of color exist beyond the boundaries of St. Louis City. But in order to rectify that horrors that have impacted our environment, something will need to be done. Ensuring truly proper land use policy and affordable housing programming could help to ease the transition back to the city for all. The wealthy can certainly afford it, and the middle class already showed us they were able to make the transition quickly in the mid 20th century. Any policy of this sort would require great consideration of the needs of the economically vulnerable. It should be noted that the working class actually has greater opportunity for upward mobility in dense communities.

I also know this is generally considered radical. Many people want their big lawns and they want their super duty pickups. But they don’t need them. And if we wish to be good stewards of Earth, they cannot keep them. The big yard and the automobile are both luxuries that never should have been extended to the working class in metropolitan areas. Our cars are the trains and our yards are the public parks. It is in these spaces that we are our most human, interacting with others and feeling fully alive.

But how do we get to a city of 700,000 when people continue to move out? The first step seems clear. Invest in North St. Louis and show Black residents that their future is brighter in the city than the county. St. Louis would stop its population decline and open up a new real estate market for affordable development that has largely been inaccessible for the last 70-plus years. Suddenly, people in the county would have a very different view of a city as one that went from crumbling to one receiving investment.

So I suppose here is to hoping that federal policy moves to condense rather than spread out our metro areas across the country and that the city enacts policy and development that encourages residency for all. Lord knows we need it. What we have now in St. Louis is a fragile, fragmented system fostering hyper-parochial “I’ve got mine” attitudes. Imagine the civic projects we could create. Imagine the money we could put toward social service programs if we didn’t have to spread out our utilities and roads. Imagine the subway system we could have if we didn’t have to subsidize parking. If one quarter of the St. Louis metro population lived in the city…