Just when it seemed St. Louis was moving beyond our obsession with faux historic new construction, the Benton Park historic district is backpedaling hard and threatening to opt out of Cultural Resources “Compatible New Construction Policy for City Historic Districts.”

At the center of the debate is a contemporary-leaning proposal to construct a single-family home at 2853 Indiana Ave and two townhomes on that same block at the northwest corner of Pestalozzi Ave & Indiana Ave (Figure 1). The proposals are similar to designs previously approved by the Preservation Board at 2858, 2860 and 2862 Indiana that were constructed over the last few years (Figures 2).

In response to demands from the Benton Park Building Review Committee an advice from Cultural Resources, the new designs were revised to have less flashy address signs and, predictably, red brick. Cultural Resources recommended the modified designs for approval at the April 26th Preservation Board.

However, for some people, the few remaining contemporary components of the designs were still too much. 9th Ward Alderman Dan Guenther argued against the proposal.

Most of our design review committee believes that if this design is approved by the Preservation Board, it’s the straw that broke the camel’s back. We don’t want to have this level of contemporary allowed without trying to make something that has some features that fit in with the neighborhood. This design quite possibly could put our neighborhood association to completely back out of the contemporary new construction policy.

Developer Nick Shapiro made a compelling case to think beyond faux.

City Life Development’s approach to building in a historic community such as Benton Park is to build what we consider to be sensitive infill that is contextual and respectful of the surrounding built environment, but that’s also clearly readable as a product of the early 21st century, not a strict replica of nearby historic buildings. We take this approach in part because we think it’s a more honest way of building. It doesn’t try to convince people that it’s an actual historic structure. It reads clearly as a product of the present time. But also, because it avoids the problem of replicas looking like cheap copies, which tends to be inevitable because the materials and building techniques of today are so different from what they were years ago.

With a close vote of 3 to 2, the Preservation Board approved the proposal. This narrow margin is set against a backdrop of historic replica construction in Benton Park at the will of the Benton Park Neighborhood Association.

In contrast to Benton Park and St. Louis’ revisionist take on preservation, replica construction is blatantly discouraged in standards by the National Park Service.

When addressing additions to historic properties, the national standards call for new design work to be “clearly differentiated from the historic” so as not to falsify history. New work shall be “compatible”, but NPS guidance states, “There is no formula or prescription for designing a compatible new addition. A new addition to a historic building that meets the Standards can be any architectural style.”

No prescription, huh? Not so in St. Louis. Several local historic district guidelines prescribe that new construction must replicate an existing historic building – local standards refer to this as a “Historic Model Example”.  A Google search of this term reveals that the “Historic Model Example” approach to historic preservation is a St. Louis creation, which is not supported elsewhere in the preservation community.

Why do the national standards matter? These are the industry standards in US architecture. Architecture with a big ‘A’.  The Secretary of the Interior’s Standards are covered in Architectural Licensing Exams and are the standards by which both Missouri state and federal historic tax credit projects are evaluated.

National organizations recognize that the primary purpose of “historic preservation” is to preserve historic places – not to dictate one specific style for new construction. A 1981 publication from the National Trust for Historic Preservation states, “Demands for similarity between old and new may unintentionally devalue the existing building by denying their uniqueness.” (Old and New Architecture: Design Relationship, National Trust for Historic Preservation)

A more recent editorial by the National Trust echoes this sentiment; “Contrary to popular perception, change is constant and important to our work as preservationists. Buildings, landscapes, and neighborhoods all change.” The editorial goes on to quote Pulitzer Prize-winning architectural critic, Paul Goldberger, “Successful preservation makes time a continuum, not a series of disjointed, disconnected eras.” (Preservation in the 21st Century: Change Is the Constant, National Trust for Historic Preservation)

Back in St. Louis at the April 26th, 2021 Preservation Board hearing, the goal of preservation came into question when a homeowner made an appeal to keep a modest retaining wall built of concrete masonry units without realizing that concrete walls violate the Benton Park Historic Standards (Figure 3).

This standard is an obvious overreach and does nothing towards the purposes of preservation. It is a cheap attempt to force the modern streetscape to appear old-timey with no regard for economy, scalability, sustainability or modern materials.

To which a Preservation Board member and fellow Benton Park resident responded, “You mentioned that historic standards shouldn’t be taking us back to look old fashioned, but that’s actually sort of what they do. We’re trying to get the neighborhood to look the way maybe it did during a certain time during the period of significance.”

The homeowners’ appeal was denied meaning they must deconstruct their wall or risk being fined.

Will St. Louisans stop at anything in our pursuit to return to the glory days of the turn of the 20th century? Should we abolish cars along with contemporary-looking buildings? Indoor plumbing? Bring back horses, manure-filled dirt roads and skies of coal-fueled smoke?

Why not rebuild the entirety of the World’s Fair Grounds like the St. Louis version of Disneyland that Walt Disney dreamed of? While we’re at it, let’s remove the Gateway Arch! Too modern and we’ll need the grounds to dock and service our steamboats.

We shouldn’t treat our historic neighborhoods like a theme park or architectural mausoleum. History is dynamic, nostalgia is stagnant, and people often think they value the former while promoting the latter.

1904 is over. And that’s okay. The turn of the last century left us with some pretty great architecture. Let’s keep it. But when we build new, let’s honor our rich architectural heritage by designing high-quality, sustainable and modern buildings that look forward to the next century. Future St. Louisans, architects and historians will thank us.

At the time of this writing, the Benton Park Neighborhood association continues to evaluate their standing with CRO’s “Compatible New Construction Policy for City Historic Districts” and is further considering allowance of concrete masonry units for retaining walls less than 18 inches in height and gray in color.

After the recent resignation of Cultural Resources Office Director, Dan Krasnoff, CRO staff is also considering a re-write of the former director’s new construction policy – hopefully not a complete revocation. An earlier draft by former director Betsey Bradley was previously abandoned under Dan Krasnoff’s leadership, so the next attempt would be the third writing by yet a third director. 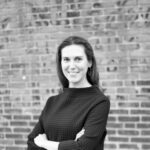 Jessica Deem is a licensed architect and owner of Virescent, a design firm specializing in sustainably-minded historic renovations and contemporary new construction. Jessica is a native St. Louisan and Benton Park resident. Prior to moving back to St. Louis, Jessica worked as a sustainable building consultant in Zürich, Switzerland where she secured the certification for the first LEED Platinum building in Switzerland. Contact her at [email protected]