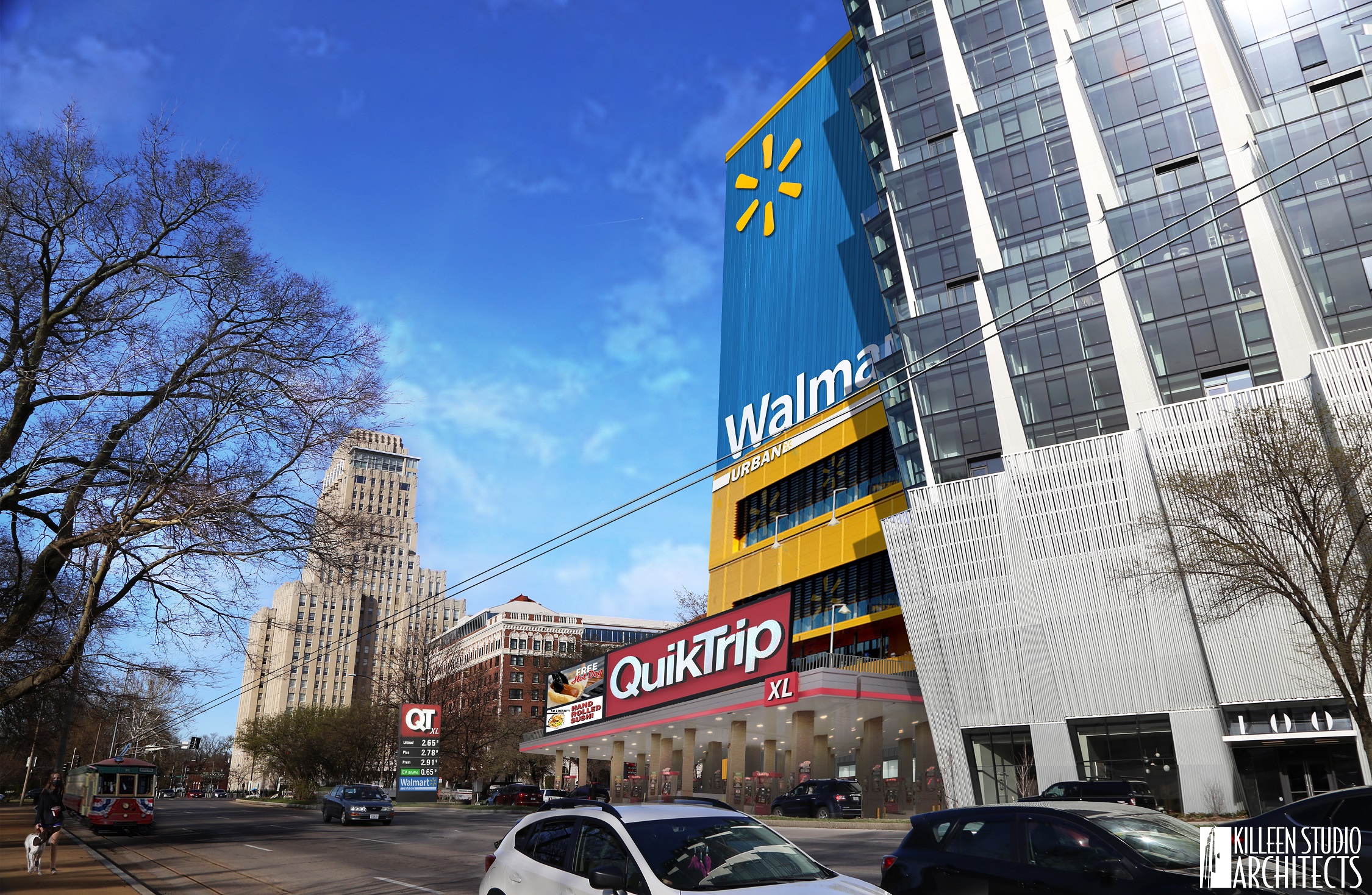 Ted Koplar announced today plans for the long vacant lot at Lindell and Kingshighway between the Chase and One Hundred. Koplar Properties, Kroenke Group, and QuikTrip have partnered to develop a QuikTrip XL, their luxury gas station, and Urban Walmart concept for the prominent corner in the booming Central West End neighborhood. They have hired Killeen Studio Architects to design a “station for your station in life” to meet the high standards of the denizens of the CWE while also providing for life’s necessities via Walmart’s extensive product selection.

The Central West End is known as a gas station desert having only two gas stations in a neighborhood of 15,000 residents and thousands more employees. The city-wide ratio is one gas station per 3,750 residents. The nearest Walmart is miles away. The development team sees opportunity in a community need not met.

There will be gas pumps offering the usual three grades of gasoline of course. In addition patrons will be able to fuel up with E85, biodiesel, natural gas, hydrogen, and electricity. While you wait you can dine in or grab ‘n go at the QT, browse the aisles in the Urban Walmart above, or order up at the kiosk integrated into the gas pump/charging station.

To head the QT Kitchen, three-Michelin-star rated chef, Leandro Ferrer, has been tapped. After earning his high accolades at The Gilded Truffle in New York City, Ferrer has been looking for a new project. “Taking on a new challenge had been on my mind for a while, so when the team approached me to elevate their gas station fair, I jumped at the chance,” said the chef. He plans to take the usual QT lineup to the next level. “I’ve been working in the QT labs for a few months now tuning and modifying the roller machine for the ideal roll speed and rotation period.”

The beverage station will also be enhanced. There will be a mixologist serving up adult beverages.

Building upon QT’s motto, “more than a gas station,” the development includes a seven story Urban Walmart above. Patrons will be able to shop in one of two ways. Either browsing the aisles or electronically at kiosks at the gas pumps/charging stations. Product extraction robots, using ‘Walsmart AI’ proprietary technology, will retrieve customer orders and super high-speed delivery elevators will rush the orders to customers at the gas pumps below in seconds.

The Walsmart tech doesn’t stop there. Sammy the robot will be available to assist patrons browsing the aisles.

The development group has also floated the idea of extending the currently dormant Loop Trolley to service the new development and the CWE district. The team is also in talks with the city to lease some of the parkland across Kingshighway for thneeded parking. They said seeking tax incentives was under evaluation. Construction is slated to begin in August of 2021 with scheduled completion in June of 2022. Once the St. Louis prototype proves to be successful, QT/Walmart plan to introduce the model in other urban markets throughout the U.S.

Editor’s note – This is an April Fools satirical article. Don’t believe it!