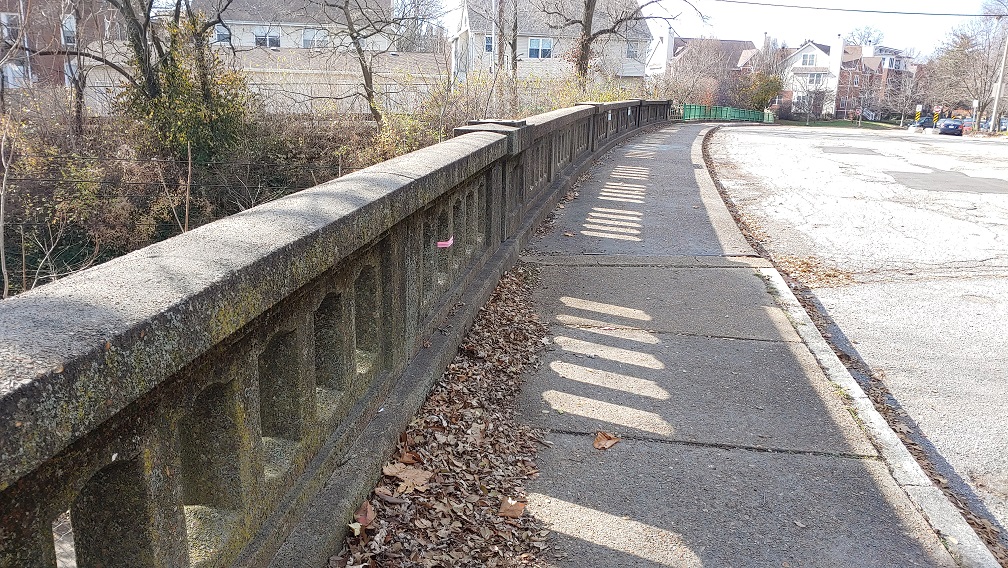 The Hamilton Bridge in the Skinker DeBaliviere neighborhood is set to be replaced soon. Built in the 1930s when the Wabash Railroad tracks were sunk in a trench and the Wabash Station on Delmar was built. Now the Metrolink tracks run under. It’s served us well for nearly ninety years, but its condition is near the worst in the city.

The new bridge will match the width of the old, have lights, have painted bike lanes (since snow plows and street sweepers only come in one size – gigantic), high fences to protect the Metrolink wires, and ADA compliant ramps with the alley on the southwest end. The alley on the northeast end that runs under will be straighter.

The Delmar bridge over the same tracks was replaced over ten years ago. It had one feature value-engineered out- the holes in the railings. The railings have to be sturdy enough to keep jaydrivers from knocking them off and falling below. The holes mean a weaker railing, so it would have had to be beefed up. Instead the impressions in the concrete were substituted.

These holes aren’t just aesthetic. They are functional. They allow the low winter sun to shine on the sidewalk to help melt snow. With no ground below a bridge to keep it warm they are more prone to snow and ice persisting. With no provision for snow removal on sidewalks, snow and ice build up, sidewalks on bridges become treacherous. The holes in the railing provide free snow removal. That’s right almost 90 years of free service built in. Were our ancestors smart or lucky?

Strong Towns – Spooky Wisdom, as Seen in Your Community

The Hamilton Bridge replacement is on a tight budget as usual. We’ve built so much infrastructure, more than we can take care of, that we just can’t afford nice things. You’d think we were richer than our ancestors, but really we’ve buried ourselves in liabilities #housepoor.

Just cross the street? The other side gets sun. Well not everyone walks too well, sees too well, or is on wheels.

We pay a sales tax that goes into ward capital funds. They could be used to cover the cost of the fancier railing. To forego them would be penny-wise pound-foolish.