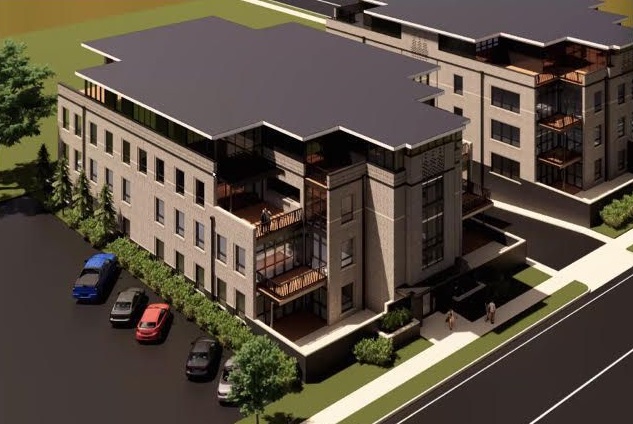 The final piece of the puzzle will be dropping into place along West Madison. Kirkwood City Council approved Savoy’s proposal for a new 12-unit condominium project at 134-138 West Madison. The project will join two other developments by Savoy, The Madison completed in and The Barclay still under construction, on the hottest one block stretch in Kirkwood. Core 10 Architects designed the Hutton.

Each of the units in the four story structure looks to weigh in right around the 1,900 sqft mark and features the large balconies that have become Savoy’s signature differentiating feature. At 12 units and 24 parking spaces, the two-to-one ratio is slightly annoying to me, but the fact that the project will share The Barclay’s existing driveway instead of requiring it’s own is enough to let me swallow that contention. I would also prefer The Barclay’s fourteen units to this proposal’s twelve (the same as The Madison), but I assume so would Savoy if they thought it was feasible. Two small homes that have long been used to house small businesses are to be razed to construct the project.

On the whole, the design looks very solid (and nearly identical to its two other contemporaries). An improvement to its street frontage would be to have the first floor balconies be directly accessible from the street (via a couple steps) rather than forcing residents to enter and exit through the main door and hallway of the building. This would certainly improve the pedestrian experience by giving them something other than a slate wall to look at as they walked by. I also think it would be preferable to residents by facilitating more of those small-town interactions (waving to someone sitting out on their front porch or inviting an old friend walking by in for a beer).

The Transformation of Madison

The Hutton’s construction will mean the completion of 38 new homes over along a on a street that previously featured none, all within a three year stretch of time.

While it’s tempting to argue that Savoy has tapped into some magical formula to gain approval of their projects when so many other developers have struggled to do the same in Kirkwood, the far more plausible explanation is simply that there are no single family homes, the natural constituency for NIMBYism, within a block of any of these projects. Without an army of angry homeowners to organize against these projects, they are tweaked here and there but tend to sail through. It certainly helps that The Madison came out looking very nice. It’s hard to argue that the subsequent Barclay or this new project might “ruin” Kirkwood when an essentially identical project two lots down very clearly didn’t, but rather added to it.

I love the Savoy projects on West Madison because they add density, and they’re basically as surefire as it gets. With that being said, it’s hard to determine where multi-family projects go from here now that all the no-brainer lots are occupied. In an ideal world, Kirkwood would issue a Request for Proposals on the city owned lot that sits amidst the three condo buildings and see if they get anyone to bite (it’s a no-lose situation, if they don’t get anything they like, they can just keep the parking lot!), but that doesn’t seem very likely to happen. There are other options though.

The apartments that sit adjacent to (just South of) the Barclay probably would be well served to be replaced by something a couple of stories taller and twenty units or so denser. And West Monroe, on the back side of the same block, seems destined for a breakout. Other leading candidates include other projects currently owned by Savoy. The building at left below, located directly across the street from the buzz that is Mission Taco, seems primed to be replaced sooner rather than later while the second floor office space (at right) that is seemingly perpetually for lease by Savoy (and located on the very same scorching hot block of Madison) seems like it should very obviously be converted to a residential use.

But enough with all the speculation. For now, before we’re forced to roll our rock back up the hill that is The James and Commerce Bank in a couple short weeks, let’s enjoy the possibility that Kirkwood might soon be making room for twelve new families worth of potential Gadfly readers. It’s the little things that get ya through, baby.