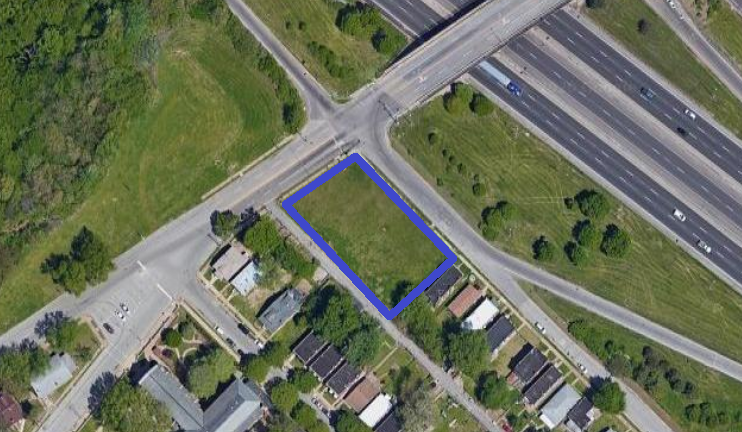 Likely on the agenda for the January 8th Board of Aldermen meeting is consideration of final passage of BB108, a 90% property tax abatement for 10 years for a proposed gas station at 5337 Von Phul at Adelaide next to I-70. The abatement amounts to $92,000 in today’s dollars. The question for the city should be whether to permit it at all, not whether to incentivize it with tax breaks. Short of being in the central corridor, this proposed gas station and tax abatement exemplifies all that can go wrong with development in St. Louis.

The Federal, state, regional, and local governments’ social engineering to coerce auto-dependency have made this location ideal for a gas station. Despite all that effort and spending, a tax abatement is still thneeded. Disappointingly LCRA staff recommend one, and the LCRA board approved it. The proposal is damaging to the neighborhood and the city in several ways.

Environment – The negative environmental impact of automobiles is well known of course. A gas station will act as a vehicle magnet concentrating pollution near a park and homes already suffering from the highway’s contribution. The oils and particulates landing on the impervious surface will wash off into nearby ground or surface water. There will be light and noise pollution too. The tax abatement runs contrary to the city’s sustainability efforts.

A number of compounds injurious to human health are released from gas stations during vehicle fueling and from underground storage tank vents. These compounds include: benzene, toluene, ethyl benzene, and xylene (BTEX).

The USEPA recommended screening school sites for potential health risk when located within 1,000 feet of a gas station.

There are 24 homes within 300 feet of the proposed gas station. Within 1000 feet are KIPP Triumph Academy and Mount Grace Convent of the Holy Spirit Adoration Sisters. The highway is also close of course- an indication of how concerned the state and the highwaymen were about such things. Imagine how it was when gas had lead in it!

Treehugger – OECD Says Electric Cars Won’t Save Us From Pollution

Public Safety – Crime and cars go hand in hand and gas stations as car magnets are prone to becoming nodes of criminal behavior. The calls for service are burdensome on tax payers not likely made up for by the tax base of the economic activity within. In a city struggling with high crime rates, is encouraging another likely node of criminality something we should be subsidizing?

Stltoday – ‘Nuisance’ properties across St. Louis tie up police resources as city leaders work to rein them in

School Funding – The proposal to close more St. Louis Public Schools has brought to the forefront how development tax incentives are impacting school funding. Of the $92k in foregone property taxes, 61.2% or $56,306 would have gone to SLPS. Will there be a plaque on the gas station that reads “Funded in part by a generous contribution of St Louis Public School children?”

Public Health – The pollution and auto-dependency encouraged by land uses such as gas stations have negative impacts on public health. Deaths due to car wrecks were up from already too-high levels in 2020 in St. Louis. Especially so for pedestrians. The site plan for the proposed gas station has large curb cuts endangering passersby even more.

High asthma rates among children in neighborhoods like College Hill have persisted for decades. The trauma to families due to asthma is yet another hurdle we’ve erected in our efforts to promote auto-dependency.

Our community’s auto-dependency should be considered as much a public health crisis as crime, drug addiction, and the pandemic are. Should the city be enabling these outcomes by permitting more gas stations and/or encouraging them with tax subsidies?

Destroying Local Wealth – There are no oil derricks near St. Louis, most of the things sold in the store aren’t made here and at predatory prices, and ownership likely doesn’t live in the neighborhood, if even the region. Gas stations amount to a wealth mine extracting it from the neighborhood, city, and region. We should be encouraging with incentives land uses that keep more wealth in communities not the opposite.

With the population of the area declining it is likely the preponderance of sales at this gas station will simply shift from elsewhere. Increasing the likelihood of an existing establishment being abandoned. While we’ve seen a few vacant gas stations repurposed in St. Louis, in all likelihood if another closes due to this one, it will become a bigger tumor of blight on its surroundings.

Land Productivity – For a city aspiring, yet failing to achieve, a high level of infrastructure and services, low-productivity auto-oriented land uses should be under great scrutiny, not subsidized. Beyond a tax abetment, land uses that front a lot of infrastructure and are city service demanding receive a subsidy in perpetuity by the community’s promise to provide that infrastructure and those services. The LCRA analysis showed that the land productivity of the gas station would barely beat the neighborhood (already quite low due to government’s efforts to spread out the region and undermine places like this) after the tax abatement is over and lag their sustainable revenue target during and after.

It doesn’t appear that LCRA analyses takes into account the negative impact on city services due to a proposed land use’s negative externalities. A proposal’s tax performance should be discounted by its service burden.

While seeing an empty lot turned into something may look like progress, it’s actually digging the hole deeper to insolvency. The cherry on top is the blighting affect of such land uses on its neighbors multiplying the hole-digging. We’ve already witnessed what the blight of the highway has done to the area, should we be incentivizing more damage?

Aldermanic Courtesy – Development in St. Louis is managed by the Aldermen. At the BoA board bills that pertain to a specific ward typically sail through in a mutually assured destruction detente called Aldermanic Courtesy. Your alderman may campaign on public safety, public health, environmental sustainability, supporting SLPS, tax incentive reform, and prudent municipal finance, but still vote for bills like BB108 out of courtesy and fear of reprisal when they have a BB up for a vote.

Is there a lobbyist for the environment, SLPS, public safety, public health, prudent municipal financial decisions, and building a city for people free from cars at the Board of Aldermen? Likely not. It’s up to you. Call your alderman and urge them to vote no on BB 108.

I’ll leave you with my favorite quote from Death and Life of Great American Cities by Jane Jacobs. BB 108 is one example of the thousands of little decisions that erode our CITY.