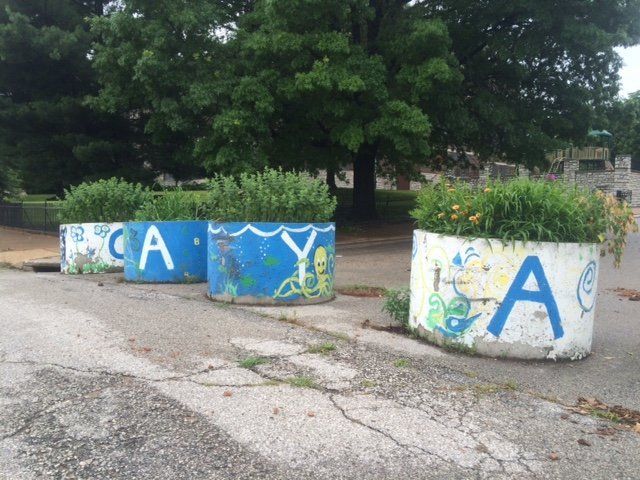 You know the feeling. You’re driving down a quiet street in St. Louis City, and everything seems normal. Then BAM! The street is blocked by a row of bland concrete planters. “Damn Schoemehl pots,” you grumble to yourself as you turn around and search for a different route.

If you’ve ever wondered why St. Louis has so many of these seemingly arbitrary street barriers, you’re not alone. For those who grew up in St. Louis or have lived in the city for a while, encountering random street closures may just be an expected part of life in the city. You probably know where all the blocked streets in your neighborhood are and how to avoid them. But these types of tactical street barriers do not exist in other cities, at least not to the extent that they do in St. Louis.

And they are all over the place! Saint Louis University sociology professor Dr. Chris Prener has documented St. Louis’ street barriers in his project “Street Not Thru: St. Louis Barriers Project,” finding 325 discontinuities in the city’s street grid created by such barriers. Putting Prener’s data on the map makes it clear that these barriers are not distributed equally around the city.

The locations of street barriers are not an accident. Barriers have been installed for various purposes, including traffic calming, crime prevention, fostering a sense of neighborhood ownership, and others. Many of St. Louis’ street closures are also unfortunately rooted in racism and classism. This is particularly true for barriers along Delmar Boulevard which have undoubtedly been placed to prevent the movement of people between the overwhelmingly Black and lower-income neighborhoods of north St. Louis and the wealthier, whiter central corridor.

The Controversy of Schoemehl Pots

Schoemehl pots have not been installed without controversy. They first started showing up on city streets in the 1970s, when city leaders discovered that sections of concrete sewer pipe could be turned into large, virtually immovable planters at very little cost. Former mayor Vince Schoemehl, for whom the pots are named, was a big fan of street barriers and believed using them to block through traffic on residential streets would help calm traffic and provide an increased sense of neighborhood ownership. Other city leaders also believed closing streets could help reduce crime and combat population loss, which remain major concerns to this day. The Schoemehl administration alone closed over 100 streets with Schoemehl pots during Schoemehl’s 12 years in office, and many more barriers have since been placed.

Street barriers are now a mainstay of city life in St. Louis, but they remain controversial for many reasons. For one, many of them seem to be monuments to racism and classism. There is also little evidence that they actually prevent crime. Street barriers can arguably hinder crime-fighting efforts, as they block street access to police vehicles and there is no official city database of barriers that first responders can reference. Fire and EMS personnel may also find their preferred routes blocked. Additionally, some people feel that street barriers cause drivers to become frustrated, leading them to drive faster and more aggressively on nearby streets in an effort to make up for time lost by having to find a different route.

The Untapped Potential of Schoemehl Pots

Regardless of what one thinks about Schoemehl pots (and opinions do vary greatly), it seems like they are here to stay for the foreseeable future. Many residents of blocked streets appreciate Schoemehl pots’ traffic calming effects, and many city leaders continue to believe (falsely, I would argue) that they are an effective solution to the city’s crime problems. Perhaps it would be best to remove all of them and restore full connectivity to the urban street grid. But if we are honest with ourselves, that will not happen. Instead, we should focus our energy on rethinking the city’s street barriers to turn them into something more useful and less divisive.

In Fall 2019 I took a class in my urban planning program called Planning for Walking and Bicycling, and for the final project the professor let us do virtually anything we wanted (as long as it related to active transportation). While thinking about my project topic, I came to the realization that Schoemehl pots and the other street barriers around St. Louis City already kind of form the basis of a bicycle boulevard system.

If you are unfamiliar with the term “bicycle boulevard,” the National Association of City Transportation Officials (NACTO) provides a great definition:

Elements of the built environment that block through traffic fall under “speed and volume management measures,” and as we already know, St. Louis has plenty of these! Many of the city’s existing street barriers already unintentionally do what NACTO recommends for bicycle boulevards. For example, one way to divert through traffic from bicycle priority streets is to force a right turn.

In the example above, simply increasing the space between Schoemehl pots to 4-6 feet would allow bicyclists to travel through the intersection comfortably while restricting automobile through traffic.

In the above example, the concrete spheres block car access to Arco Ave from Newstead Ave, and spacing them a bit further apart would make it very easy for bicyclists to get through.

The possibilities for creating bike boulevards are endless, and you can check out the many design recommendations from NACTO’s Urban Bikeway Design Guide here. Many of the elements of bike boulevards can be accomplished using existing barricades, and the other elements can be implemented with very simple and inexpensive infrastructure, such as signs and pavement markings.

In my grad school project, I combined the Schoemehl pot bike boulevard idea with my own proposed extension of the planned greenway on the old Hodiamont streetcar right-of-way to create a cross-town walking and biking path (this is now more or less part of the plan for the Brickline Greenway). The greenway would be a great addition to the city on its own, but I thought it would be much more useful as an actual transportation route if people could reach it safely and comfortably on foot or by bike from surrounding neighborhoods. So I threw a bunch of possible bike boulevard routes on the map in adjacent neighborhoods, making use of existing street barriers whenever possible. It is not a fully fleshed out plan by any means, but the results are pictured below.

As you can see, strategically reworking existing street barriers into a bike boulevard network can greatly increase opportunities for safe and comfortable bicycling. Because a key design feature of bike boulevards is low traffic speeds and volumes, a system of bike boulevards would also make neighborhood streets safer and more inviting for people walking and using wheelchairs or other mobility devices.

This is all very much possible with a surprisingly small budget. Compared to other types of bicycle infrastructure, bike boulevards are very inexpensive. The city of Berkeley, CA, has one of the most successful examples of a bike boulevard system, and to date, it has spent only $330,000 on implementation (and that was without the advantage of already having Schoemehl pots on the ground). By comparison, a typical separated or protected bike lane will usually cost between $300k and $1 million per mile. While this more expensive type of bike infrastructure is absolutely justified on high speed, high volume roads, it is not feasible or even necessary on every street.

Using the city’s existing street barriers to create bike boulevards would not get around every concern about street connectivity for vehicles, but it would strategically use simple design and affordable infrastructure to make streets safer and more accessible for people walking and biking. It would also help address equity, health, and environmental concerns by making transportation by bicycle a viable and dignified option throughout the city. A coordinated effort led by the city would be necessary to implement Schoemehl pot bike boulevards, and it would likely require putting an end to the haphazard placement of street barriers at the whims of alderpeople. But the benefits to the city would be immense and St. Louis would position itself as a national leader in active transportation and street safety.

Brandon has a B.S. in Environmental Science from SLU and is currently a graduate student in the University of Utah's Master of City and Metropolitan Planning program. A former St. Louis resident, he has a lot of love for the city and enjoys thinking and learning about urbanism in the St. Louis area. One of Brandon's biggest personal interests is active transportation, and he believes everyone benefits when a community is safe and comfortable for people of all ages and abilities to walk and bike. Brandon currently works as a research assistant at the University of Utah's Metropolitan Research Center.