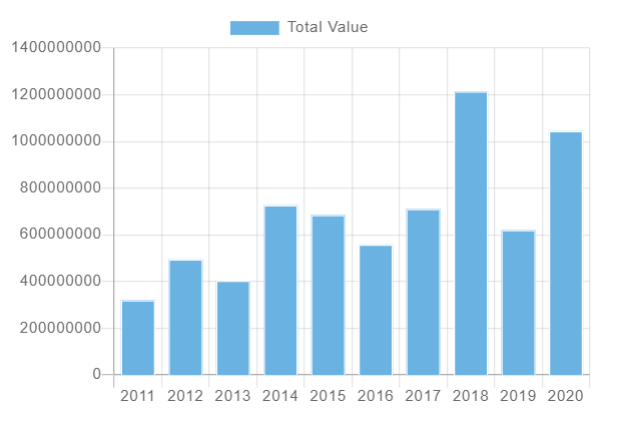 2020 was a banner year for development in St. Louis. The pandemic and a record high murder rate didn’t slow most big projects, resulting in a total dollar amount second only to $1.2B in 2018.

The number of permits issued was the 3rd fewest in the last ten years indicating fewer permits for smaller projects. There were 99 permits greater than $1M, totaling $820M. Also there were 118 permits issued for new single family homes.

Most new developments and big rehabs received some form of tax incentive- property tax abatement, TIF, sales tax exemption on construction materials, etc or were tax exempt. The needle has moved some as we see property tax abatements for shorter terms and less than 100% more frequently. We’ve also seen the emergence of tax assurance- meaning the amount and/or rate of increase in assessments is set for a period of time. Among the residential project there was little in the way of affordable units. With the return of the state’s Low Income Housing Tax Credits (LIHTCs) we may see more in the future.

Will 2021 be another billion dollar year? There are currently over $350M in unissued permits, so 2021 will be off to a good start.

A shoutout to the busy bees at the St. Louis Building Commission for posting the permit database and its handy data webpage. Also big shoutout to all those investing in St. Louis!

Here are the top ten plus three for 2020. Note that the building permit amount does not equal the total project cost.

12. The Verve 3765 Lindell $11.1M by Collegiate Development Group with Architect Modus Studio. 78 apartments. It received a 90% tax abatement for 5 years.

11. AC Hotel in the CWE $15.3M by Koplar Properties, Concord Hospitality Enterprises and Homebase Partners with HDA Architects & JNS Architects. 192 rooms. It received property tax assurance that the assessment would not increase by more the 2% in each biennial reassessment for 10 years.

8. Expo at Forest Park 301 DeBaliviere $22.4M by Pearl Properties. 278 apartments among two buildings and ground floor retail including a grocery store. They were granted a $12.7M TIF and a CID sales tax estimated to raise $1.4M. Pearl has committed to enter into a Community Benefits Agreement (CBA) with the neighborhood.

7. Shell Hotel 1221 Locust $25M Reimagine Hospitality plans to have a dual-branded hotel, with 130 extended-stay rooms from Home2 Suites by Hilton and the other 61 rooms as Hilton’s Tru brand. It receive a property tax abatement of 87% for 10 years.

5. 4545 Laclede $36M by Koman Group. 200 apartments. It received a property tax assurance of $200k with annual increases of 2.5% for ten years and sales tax exemption on construction materials.

3. WUSTL Neuroscience Building $28M and $13.2M These are only for the steel structure and foundation. More to come. It will be property tax exempt.

2 & 1. MLS Stadium $88M and $206M by the Taylor family. It received property tax abatement on improvements of 100% for 25 years, sales tax exemption on construction materials, a 1% CID sales tax, possibly a 1% TDD sales tax and a 1% Port Authority sales tax. Still it not being city-owned means it’s the best stadium deal the city has entered into since Busch II.