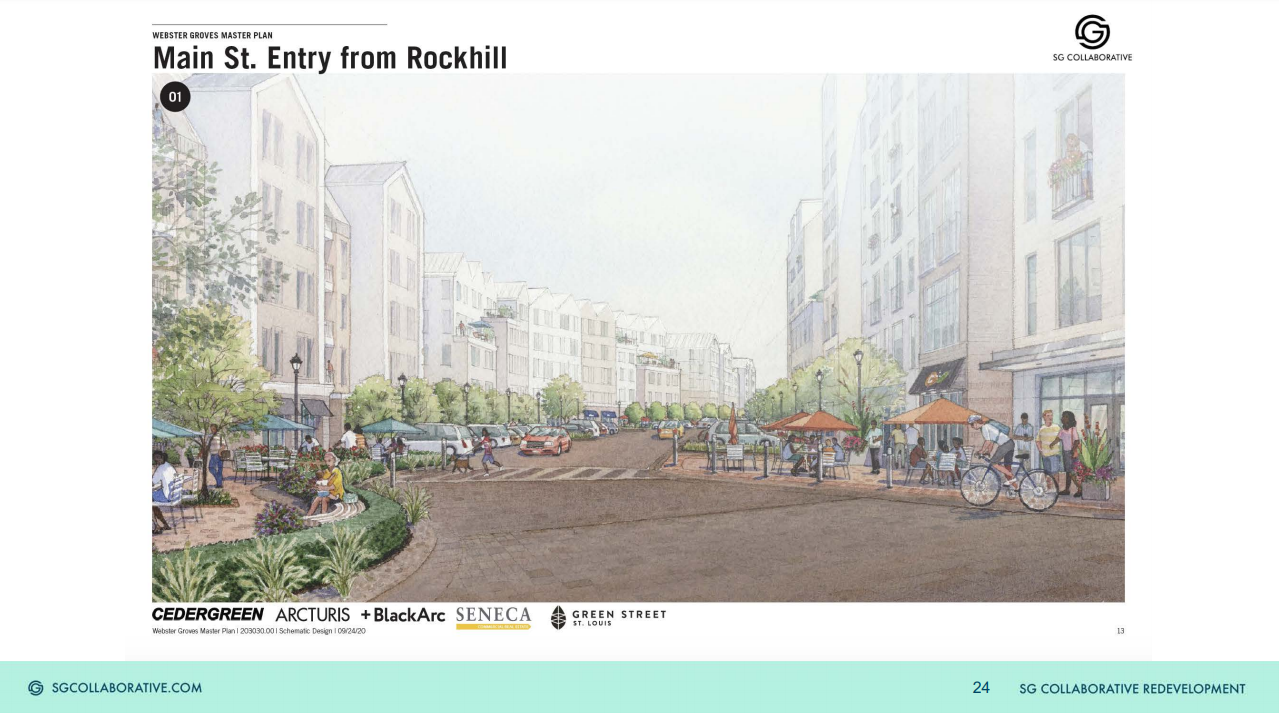 I’ve long contended that Webster Groves and Kirkwood are natural rivals. That Webster certainly had it’s advantages: A more distinguished cultural scene facilitated by Webster University and especially its very legitimate Repertory Theatre, and a more distinguished culinary scene featuring four restaurants on Ian Froeb’s STL100 (including two in the top ten: #5 Olive + Oak and #9 Balkan Treat Box) to our two: Nathaniel Reid and the recently opened Mission Taco), amongst them. But the one thing Webster Groves didn’t have, was a consolidated, bonafide, downtown. Although Webster has pockets of urbanism, they were disconnected from one another and too small to warrant walkability. The one thing Kirkwood has always had going for it compared to Webster is a large consolidated downtown, large and vibrant enough to occupy a day and, if we played our cards right, sizable enough to house everything you’d need to make car ownership optional. It appears that advantage may be about to evaporate.

Unbeknownst to me and, it seems, a large portion of St. Louis urbanist twitter, throughout this strangest of summers, Webster Groves has been cooking, very quietly and likely facilitated by the temporary print dormancy of the Webster-Kirkwood Times, with gas. That perception, changed very rapidly today when I stumbled across a plan to add between 600 and 750 residential units, between 45,000 and 60,000 SqFt of commercial space and 100,000-120,000 SqFt of office space spread between no fewer than eight buildings, some of which appear to rise seven stories.

This project, a collaboration between Green Street STL & Seneca development groups is not only large, it is also very very good. Featuring connections to the Great Rivers Greenway system, constructing a boardwalk along Shady Creek, and featuring very limited parking, the project essentially checks every box on a lover of cities’ list. Furthermore, the project aims to feature, if not classically affordable housing, at least housing that is accessible for teachers and other young professionals with 10% of units to be target towards those making no more that $42,000 a year.

The project significant expands the scope of the heart of Webster’s urban core oriented along W. Lockwood and offers the businesses located there some badly needed residential density. The businesses that are already there leave this part of town well positioned to explode in popularity, with Euclid records, Olive + Oak, and Straubs grocery mere steps away from potentially thousands of new patrons. They are likely to, or potentially already have, thrown the full weight of their support behind the effort.

While I am pretty hyped up by the sheer audacity and quality of this project so far, it does shake up my opinion of the positioning of the Motherland (Kirkwood). As soon as I tweet my initial story, and offered the commentary that Kirkwood needed to “BUILD” and do it quick in order to keep up, a follower asked why this had to be construed, like almost everything else in St. Louis as one faction competing against another? Why couldn’t we just be psyched that Webster would be getting a good development? I enjoyed the question immensely because that follower was dead on, the sort of factionalism that my framing implied does do a tremendous amount of harm in St. Louis. But I stand by that framing because in this context I believe it has entirely different implications. This sort of competition, unlike the TIF-wars, is incredibly good and healthy for both Webster and Kirkwood. It is two towns, competing for new families and young families and a stronger tax base. It’s two towns competing to see who can build enough homes to meet the tremendous demand to live in both of them. And I stand by the fact that if Kirkwood doesn’t get it’s ass in gear, and quick, we very well may lose that competition instead of enjoying the fruits of it.

The good news is that Kirkwood has two tremendous opportunities to offer a direct counter to Webster’s growing ambitions: The James and Commerce Bank developments. These two projects, together, would create 300 new homes and 21,300 SqFt of retail space in a tremendously underdeveloped stretch right at the heart of our downtown, and given our original advantage, like protect our hegemony as Queen of the Suburbs.

We can even further match Webster blow for blow by connecting it all to the transportation networks that make us not just an isolate patch of urbanism but truly a hub from which spokes might spread in all directions. Chief amongst this potential network are two items that Webster simply can’t counter: the third busiest Amtrak Station in the state and not just any Great Rivers Greenway, but rather it’s crown jewel: Grant’s Trail. The first of these is up and running, even if it’s not quite being used to it’s full potential, and the extension of the latter to Downtown Kirkwood was counted, at least during the election season, as one of new City Council member Liz Gibbons’ highest priorities

The good news, is we won’t have to wait long to see if we’re up to the task. The Commerce Bank proposal will receive its public hearing before city council in a mere six days, on Thursday, October 1st, and The James will follow soon after with a special dedicated public hearing to be held on Thursday, October 22nd. These plans are by no means a done deal. Each will face tremendous public backlash from a select few, and will require a high level of public support, especially in the public comment section of those two meetings to have any chance at all. We need, more than anything else, people like you to step up to make it work, to help Kirkwood live up to it’s overwhelming potential.

And if building new homes doesn’t get you out of bed, perhaps this will: Kirkwood and Webster play in a little football game every year. You may have heard of it. They play that game regardless of how many athletes walk through either school and regardless of what class either team competes in that year. Kirkwood has won the last seven match-ups in a row, narrowing Webster’s all time series lead to just five: 58-53-7. But two thousand new people calling Webster home is a lot, and odds are, that at least a few amongst those new residents, maybe a new quarterback whose family just moved from California, or some meat stick linebacker relocated from Oakville, or Lafayette, or North County, is going to be special. So if nothing else, let’s do it for the bell.