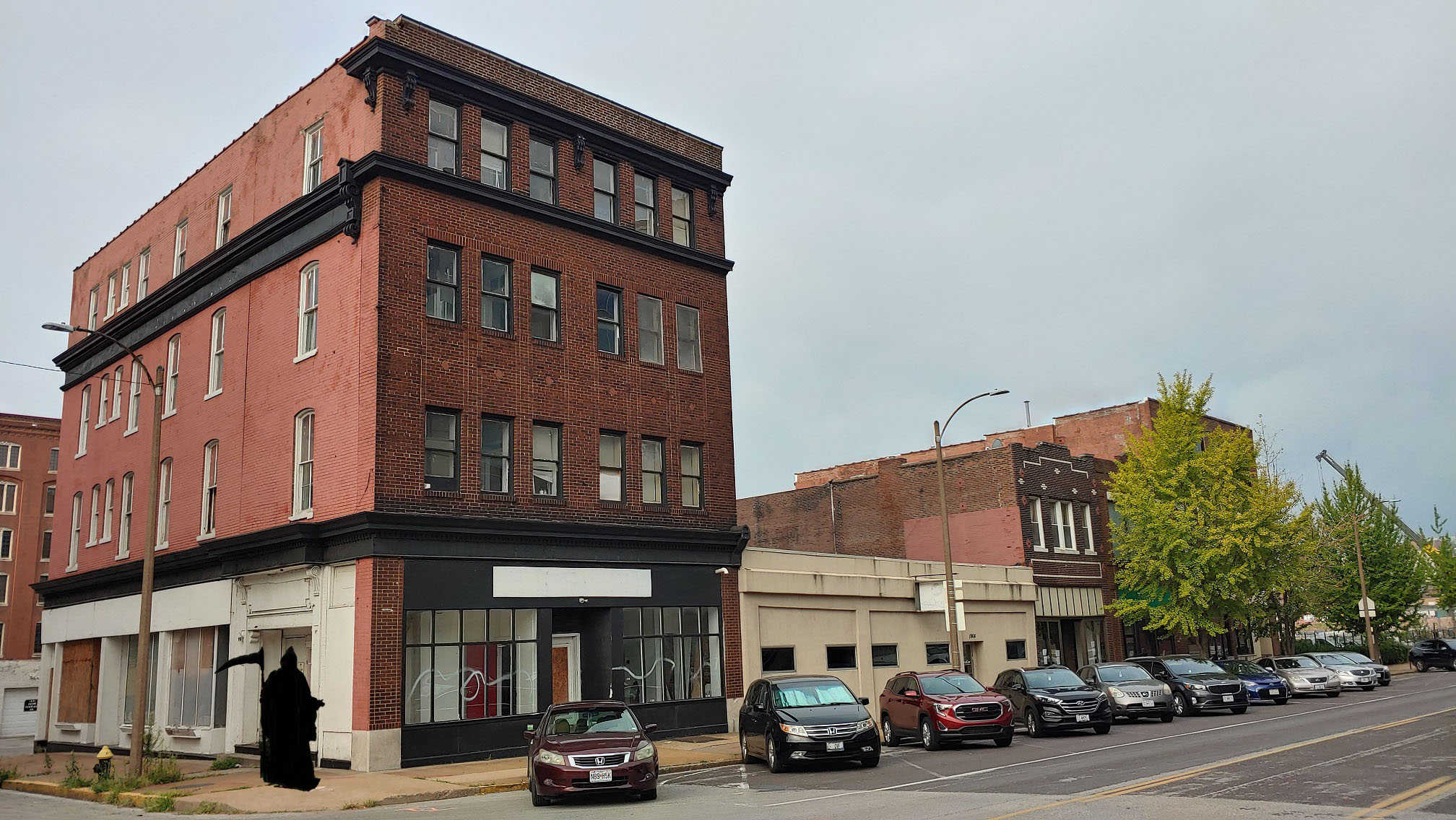 In August I broke the news that demolition permits were applied for the buildings on 1900 Olive and one at 1901 Pine. It quickly became clear it was related to the new MLS stadium, but the team organization kept quiet on their intentions until the permits were approved.

Our worst fears were realized- these human-scaled CITY buildings were to become thneeded surface parking. Maybe someday a parking garage with street level commercial will be built a la the Kiener garages. Those of us concerned were hopeful the demolition request would go before the Preservation Board wherein board members and the public could air their concerns and the board would vote on the matter. Instead the director of the Cultural Resources Office since 2016, Dan Krasnoff, approved the demolitions without referring to the board for consideration with or without a recommendation.

In 1890, upstairs at 1900 Olive lived Frederick (Will) Gronemeyer, owner of Gronemeyer’s Hall. His youngest son Frederick G. graduated from Wash U & later became vice president of Monsanto. I’d hate to lose our history for surface parking. So many stories yet to be told.

The new Downtown and Downtown West Plan envisioned the buildings remaining and CITY being built on the surface parking filling the rest of the block.

At the October meeting of the Preservation Review Board the CRO director gave a report on his reasoning behind approving the demolitions. It was most disturbing, revealing major shortcomings in our approach to development and preservation.

The director points out that these building had the lowest rung of preservation protection. The community through statute has decided this. Large portions of the city don’t even have this level of review. If keeping built environments like these are a priority for us, we need city wide preservation review and a higher level of review with that designation. Perhaps buildings of a certain age, given that they by default were built in a traditional CITY manner, could be subject to a higher level of review.

1. No consideration of the merits of the walkable human-scaled traditional fine-grained development patterns (aka CITY) of the current land use compared to the proposed replacement. In fact there is preference in policy for coarse-grained development patterns. Common control of all the property on the block helps justify demolition. This and every urbanist website and book is replete with reasoning and data backing up the merits of walkable places. Watch the video linked below.

2. No consideration of land productivity of the current land use compared to the proposed replacement. The low productivity land use amounts to a parasite because the city is still committed in perpetuity to providing the infrastructure that serves it, yet it generates little tax revenue to cover its cost, which has to be made up elsewhere either through higher taxes or foregone infrastructure and services.

The loss of the tax base from the buildings being replaced by surface parking is over $600k in assessed value. Land productivity fell dramatically as a result of the demolition. The buildings on Olive had an assessed value per acre of $2.6M while the surface parking is $488k. This results in about $50k less in property taxes every year, 62.1% of which would go to the St. Louis Public Schools.

3. No consideration of the negative externalities of the proposed replacement. The thneeded parking lot contributes to driving dependency and all the negatives that come with it. There is a Metrolink station and several bus lines near the block.

Criterion D – Reuse Potential
Comparison block is the south side of the 17xx block of Olive Street. These buildings are in a National Register District (greater incentives here) and are mostly vacant and underutilized

The lack of utilization of the buildings on 1900 Olive and 1700 Olive are cited as justification for the demolition of 1900 Olive. Never mind that the buildings on 1900 Olive were vacant because the new owner emptied them. A big part of the sale of the stadium plan to the public was activating the surrounding neighborhood. There isn’t much less active than a parking lot. Traditionally soccer fans patronize establishments near the stadium to pregame. The opportunity for Amsterdam’s sister bar or some such to be sited here is lost.

Especially concerning is the reference to 1700 Olive. Is it now threatened? A rehabbed and filled Butler Brothers would make these more attractive. Waiting for that is a no-brainer.

This vague statement from the Soccer Stadium Redevelopment Plan justifies demolition of 1900 Olive apparently. What else nearby could fall if the team decides it thneeds more parking? To top it off a TDD sales tax may be used to help finance destruction of our CITY.

F Proposed Subsequent Construction
“ Parking lots will be given favorable consideration when directly adjoining/abutting facilities require additional off street parking;”
The proposal for structured/surface parking is for activity at the soccer facility and/or displaced parking from lots on site of the MLS Stadium and conforms to this criterion.

Auto-orientation begets more auto-orientation. This is the erosion effect Jane Jacobs describes in Death and Life of Great American Cities. Incredibly this is our city’s policy preference. For a city struggling to raise the funds necessary to provide a high level of infrastructure and services, it is baffling that self harm through low-productivity land uses is preferred. Let that sink in.

G Commonly Controlled Property
Ordinance 64832 states, “If a demolition application concerns property adjoining occupied property and if common control of both properties is documented, favorable consideration will generally be given to appropriate reuse proposals. Appropriate uses shall include those allowed under the current zoning classification, reuse for expansion of an existing conforming, commercial or industrial use or a use consistent with a presently conforming, adjoining use group. Potential for substantial expansion of an existing adjacent commercial use will be given due consideration.”

Demolition of fine-grained CITY is our city’s policy preference. No matter the merits of the current land use compared to the proposed replacement. Again, let that sink in.

Our city’s policy preferences are failing us. If you want different outcomes please contact your alderman to change them. Otherwise we will surely lose more of our CITY.

I’ll leave you (again) with my favorite quote from Death and Life of Great American Cities by Jane Jacobs. The decision by the CRO director is yet another example of the thousands of little decisions that erode our built environment.