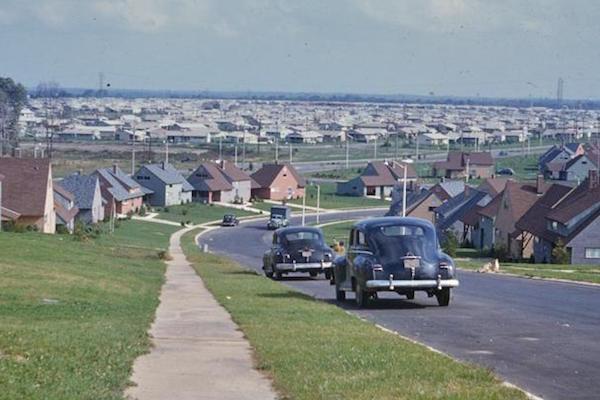 Big City is flourishing. It’s densely populated, full of bright and industrious citizens. It’s also loud, crowded, and expensive. If you look a couple miles to the west of Big City, however, you will find huge plots of vacant land. This land is so cheap, that for the same price you might pay for an average apartment in Big City, you could instead buy some land and build a big fancy house on it, complete with a backyard and a white picket fence. For most of Big City’s history, nobody has wanted to live on this land because it would simply take too long to walk to work every morning. It was way easier to live close to work and deal with the noise and cramped conditions of Big City. But then, Henry Ford invents the automobile! Suddenly, the commute doesn’t seem all that bad. A bunch of people buy cars and take out bank loans, moving their families west to build the house of their dreams on that cheap, vacant land. Out here, they are no longer officially within Big City limits. They decide to name their new enclave “Suburbville.”

There are benefits and pitfalls to living outside of Big City. On the bright side, people in Suburbville are no longer obligated to pay taxes to Big City! Woo hoo! One of the downsides, however, is that Suburbville no longer has access to any of Big City’s infrastructure. This means they will have to build their own water and sewage systems. Fortunately, Suburbville is much smaller and less complex than Big City, so their infrastructure can be similarly smaller and less complex. They dig a couple of wells into the ground and, voila, drinking water! There aren’t that many people in Suburbville, so they can simply flush their toilets into a nearby river, a simple and inexpensive solution to a dirty problem. Suburbville also has to train and hire their own Police Officers. Fortunately, crime is very low in Suburbville because, originally, it was just a big empty field. Additionally, the only people who can afford to move away from Big City are families with enough money to buy a car and to convince a bank to lend them money. Gainfully employed people such as this don’t tend to commit many crimes. This means that Suburbville only needs a very small police force.

Thanks to the minimalist nature of their infrastructure and a small police department, Suburbville can afford to set tax rates much lower than Big City. This is working out great! Every day, residents of Suburbville drive into Big City for work, collect their paychecks, and then drive home to their big houses in Suburbville where they are only obligated to pay low Suburbville taxes. Life is pretty good.

Meanwhile, back in Big City, people begin to look upon Suburbville with envy. They see low taxes, low crime, and big fancy houses. Many of them, at least those who can afford to do so, pack up their families and move. As people flood into Suburbville, its tax base grows substantially. Suburbville’s City Council is able to lower the tax rate every single year. They cite their responsible leadership and stewardship of taxpayer money.

Big City has a big problem: Everybody with money is moving to Suburbville. Why deal with the tax rates of Big City when you can just move a couple miles west, keep your job, and pay substantially less for a newer, bigger house? The average income of Big City residents plummets. The banks won’t loan money to poor and unemployed people. These people can’t afford to move and are stuck behind in Big City. Poor people are more likely to fall into lives of crime, so the crime levels of Big City stay about the same. The infrastructure of Big City hasn’t changed, so the cost of maintaining it also stays about the same. As time goes on, there are fewer and fewer people left to pay taxes in Big City, despite the fact that it still costs about the same to maintain infrastructure and pay for police service. Left with no other option, Big City increases its tax rate. Unfortunately, this only encourages more people to move away from Big City into Suburbville.

Eventually, Big City decides to start taxing people from Suburbville who commute into Big City for work. This enrages the people of Suburbville! They indignantly scold Big City for being so irresponsible with taxpayer money and blame the government for not being tough enough on crime. The mayor of Suburbville writes an op-ed for the “Big City Today Newspaper.” In it, he decries the high taxes of Big City as being damaging to the region. He brags about Suburbville’s exploding population and thriving economy, concluding that Big City is clearly being mismanaged by tax-crazy liberals. Lots of people buy into this story. They move to Suburbville.

Meanwhile, back in Big City, infrastructure is falling apart as regular maintenance is being deferred to save money. It steadily becomes more and more expensive to repair it. Crime continues unabated and poorly paid police officers lose morale. Many houses sit vacant for years, eventually decaying to the point of no return, serving now as hiding places for drug addicts, squatters, and criminals. Entire neighborhoods hollow out and become breeding grounds for crime. Major corporations take one look at Big City and decide to look elsewhere for expansion. Young people, faced with the choice of either living in a decaying city or living in the suburbs, elect to move away from the region entirely.

This story is a caricature of what happened to St. Louis. The automobile allows people to commute long distances between work, home, and the grocery store. It has created a situation where population density in US cities can expand outwards geographically. As this outward expansion occurs, it will eventually expand past the nominal city limits. People outside of those limits are no longer obligated to pay many of the taxes required by that city.

While this scenario has played out all over the United States, the problem is more pronounced here in St. Louis. The Great Divorce in 1876 technically limited the size of St. Louis City to 66 square miles, smaller than practically every other major US City. The geographic expansion of the population wasn’t necessarily more severe here than anywhere else, but our city is so small that the same amount of expansion meant that a larger portion of our taxpayers were no longer obligated to pay taxes to the urban core. In other words, suburbanization hit St. Louis harder than anywhere else. Over the generations, this situation has crystallized into what we see today.

Our tax base is broken up into self-serving fragments. This weakens us financially. Problems with vacancy, infrastructure, and crime is a burden shared unequally among our region’s residents. Some county municipalities get away with 0% real estate tax. Meanwhile, St. Louis City struggles to raise enough money to afford even the most basic of public services. Chesterfield soaks up sales tax revenue from people all over the region, but keeps much of that money for itself.

This is a structural aberration. An engineering problem. It’s like an airplane that crams all of its passengers into the back couple of rows. It’s not stable and bound to crash.

St. Louis has chosen to deal with this fatal flaw by jury-rigging some roughshod solutions. The city charges an earnings tax, which everybody hates. We misuse Special Taxing Districts and TIFs, and then argue about it. The County has contorted its sales tax system into a confusing tax sharing scheme. We’ve consolidated our sewage system into the regional entity known as MSD, but still have separate water systems, health systems, police systems, refuse systems, and so on. Politically, we don’t have an arena in which we can come together to air out grievances. Instead, wealthy businesses play municipalities against each other, picking us apart and extracting concessions that wouldn’t be possible in another system.

The issues we face today have been developing for generations. Correcting the original sin of fragmentation isn’t going to immediately fix these problems, it will most likely take decades for them to resolve, but if we want St. Louis to still exist in 100 years, we have no other choice but to do so. Now is better than later. The Better Together proposal isn’t perfect: It’s short on details and funded by Rex Sinquefield, a renowned skeptic of government. But perfect can’t be the enemy of good. We don’t have any more time to waste. I would prefer to try to make the Better Together plan work, negotiating minor changes if necessary. To kill this plan out of pure cynicism would be a mistake. Whatever problems you may have with Better Together, you cannot argue that we would not, in fact, be better if our region was together.

Jacob Rebe has been a North Hampton resident for 30 years. He is a graduate of Mizzou (B.A. Biological Sciences, 2010), works as a chemist, is a member on the board of the Kingshighway Hills Neighborhood Association, and writes for his website inmostcity.com