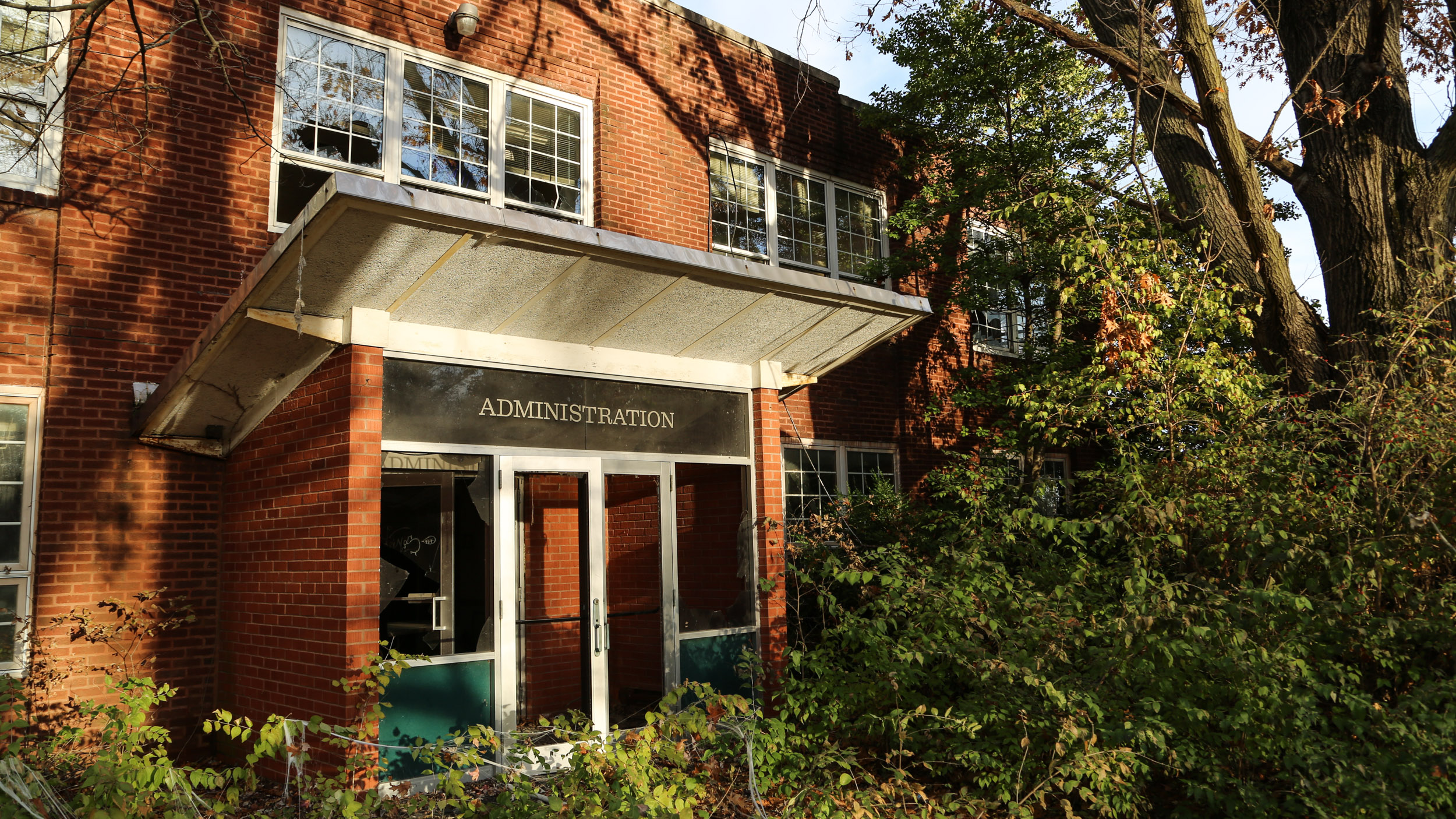 If you’re lucky enough to sit at the very last barstool of Stingers Restaurant & Pizzeria in Cahokia, you notice something a bit remarkable through the restaurant’s nearby blinds. Not even 20-feet away sits one of the many abandoned buildings of the old Parks Air College. The school was a staple of this Illinois town from 1928 until 1996, when it was fully-subsumed by Saint Louis University, along the way becoming Parks College of Aviation, Engineering and Technology. That version of Parks still exists, with classrooms at the main midtown Frost Campus of SLU and a small hangar/flight presence remaining in Illinois at the nearby Downtown St. Louis Airport in Cahokia.

But 70-years of history remain in stasis at the intersection of Camp Jackson Road and Falling Spring Road, a stone’s throw from the area’s primary feeder road, Illinois Route 3.

For 22 years now, the dozen-odd buildings within the old Parks College have been slowly, steadily reabsorbed by nature; ditto parking lots, open spaces and walkways.

Only one building from the old complex has found a new life and that’s the one that houses both Stingers, popular for its sub-$10 pizza-and-salad ; and its under-the-same-roof neighbor, Ultimate Tax Service. About 100 yards away, a YMCA built-from-scratch sits alongside Parks’ old soccer field, and all three of these concerns immediately overlook the overgrown, crumbling, yet remarkably tranquil grounds of the old Parks.

Because Parks Air College, as it was known early on, existed right the rise of the popular internet, there are huge gaps in the digital history of this place. Wikipedia, of course, does fill in a bit of the , noting: “Parks Air College was founded by Oliver Parks in 1927. Parks was America’s first federally certified school of aviation, holding the FAA Air Agency Certificate no. 1. Oliver Parks started as the sole flight instructor with two instruction aircraft at Lambert airfield. The venture nearly ended when Parks crashed a Laird Swallow training aircraft leaving only one remaining trainer and was unable to teach lessons while in the hospital. He bought 100 acres in East St. Louis in 1928, and built five buildings the same year. By 1929 Parks operated 35 TravelAir trainers with an enrollment of 600 students.”

The activity around Parks College would increase throughout the next two decades, fueled by a natural increase in the aviation business, as well as the unnatural effects of World War II in creating the need for more pilots, engineers and instructors. In the post-WWII years, the school continued on, with varying cycles of both student growth and lost enrollment.

Much of this unique, largely-untold story is tucked away in a series of thick binders, found in the Greater St. Louis Air & Space Museum, which is housed inside Hangar 2 of the St. Louis Downtown Airport. There, docents offer entry to the museum on a limited basis: Friday-through-Sunday, from 10 am to 4 pm. During those 18-hours, the public, for a small donation, can wander through a facility that’s packed with everything from old uniforms to bits of machinery to photography. While Parks has a role in some of the displays — for example, a full-wall photograph that depicts the grounds in the 1930s — the really good stuff is tucked away those binders; docents will pull this material from heaving shelves if asked.

The books were compiled by Ed “E.J.” Sutorius, who served as a Parks historian of considerable skill and passion. His books are filled with newspaper clippings, like the P-D obituary of Parks; full magazines like the alumni-focused Parks Today; and some of the most comprehensive histories of the early years, like an informative 1991 piece from Vintage Airplane Magazine, penned by Terry L. Bowden, detailing “The Complete Story of Parks Aircraft Inc.”

In the preface to one volume, Sutorius writes: “This series of binders is not an attempt to tell the total story of St. Louis aviation history or the story in aviation in total. This started as an attempt on my part to assemble in some order all of the loose aviation materials collected over a 55 year period (1935 – 1990). As the work progressed the idea grew in my mind of this being something more than just my own personal basement collection material. At the completion of the effort my thinking was that this should be in a location which would be accessible to the public for possible reference usage.”

And in that task, he succeeded. His collection lives, though you have to work a bit to find it. Interestingly, finding material in the modern, Google-era context is a bit laborious, too.

There is a bit of material tucked away online, sometimes told from the perspective of former students, teachers and staffers, though their digital crumb trail is very much incomplete. One big burst of people’s history comes via nextstl.com contributor Chris Naffzier’s site, St. Louis Patina. On October 14, 2013, Naffziger reposted photos from that era, later adding a few more shots from early in 2018. The site of the decay at the old Parks brought an onslaught of memories.

One especially nice recollection comes from Dan Petersen who wrote on November 10, 2017: “Hi, I entered my first year at Parks College back in September, 1980. It was a magical time and a huge part of my teenage life, so many great memories. I enrolled in their PPO program, my flight instructors name was Marty Culbertson, he was the funniest guy and knew everything about flying. I remember soloing on October 7th, of that year. I did one touch and go and then the full stop to pick-up my flight instructor who was all smiles, I just remember my back being soaking wet and feeling on top of the world, what a day to remember. The whole time I was at Parks I resided in Halloran Hall (D-block), this was the best place to stay since every Wednesday was hump night in this dormitory which meant the beer was flowing and the modern 80’s rock music was playing. Long story short, after becoming a pilot at Parks I went on to fly a twin engine corporate jet, Cessna’s Citation. This plane had a little more zip than the Cessna 152’s we were trained in over at Bi-State Parks airport. In conclusion, SLU definitely could have maintained their property and when the city of Cahokia gained control they should have picked up the ball. It’s up to the state of Illinois now, lets keep our fingers crossed and hope they may provide some badly needed restoration funding for this worthy historical landmark.”

The last portion of this note references a prior suggestion from Cahokia’s Deputy Clerk Debbie Duncan, which reads, hopefully: “The Village is currently in process of restoring the Complex…to its original Historical Aviation value . The ground were originally not just a school… it served as a maint. Depot for most of the famous flers of the 20’s…30’s & 40’s. The Village is looking to change the complex ito a series of Aviation & military museums… Along with creating a vocational train Facility…serving adults & High school students…IF you believe you would be interested in becoming involved in this project? Then please contact my office…” Later notes in the thread indicate that the effort was abandoned last year, with as little explanation as the original, upbeat progress report.

After a series of calls, emails and FB messages went unreturned, this reporter went to the Village of Cahokia’s city hall last Friday, checking in at the clerk’s office. There, two employees were reticent in offering information. One nodded in the affirmative when asked to confirm that the Village is the owner of the old Parks site, rather than prior owner SLU; she then shook her head to the negative when asked if there were any current redevelopment plans for the site. After an awkward moment of silence, she said “no” and threw her arms to the side, never making eye contact. All the information we needed was all the information we got.

That interaction was so odd that a chaser was needed. After a quick bite at the Stingers salad bar, a walk-through the site was the proper conclusion to the morning, filled as it was with dusty binders and quirky clerks. Walking through the grounds — not for the first time — visuals were quickly re-established. The Dining Hall, with its collapsed roof and thick, insulation-riddled air. Fire-damaged Mercury Hall, with its hand-painted murals of space travel and cartoon heroes. The Administration Building, with kicked-in front doors and a few, strange, Blair Witch-style totems hanging on nearby trees. And the inter-campus walkways, overwhelmed at points with native plants, weed trees and thickets of brush.

Birds sung, summer insects hummed, a few cars passed by on Falling Spring Road. And above, in a perfect moment of synchronicity, flew a bi-plane. It was a splendid moment of history, lived in real time.