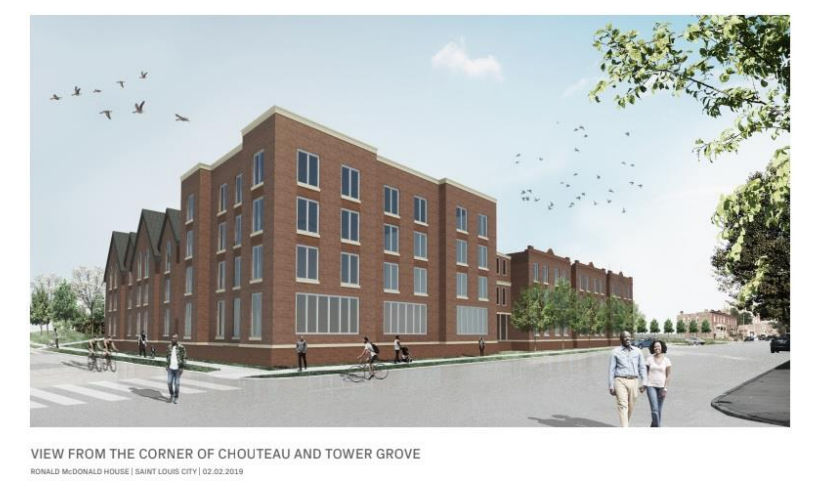 Ronald McDonald House Charities of St. Louis plans to build a new house at Tower Grove and Chouteau in the Forest Park Southeast neighborhood. The charity provides housing to families whose children are receiving medical treatment. The $22M, 85,000 square foot project consists of office and public space on the ground floor, 60 living units on the second and third floors, and a fourth floor for expansion. There would be 81 on-site parking spaces. The site plan shows areas of possible expansion along Tower Grove to the north and Chouteau to the east. The front door faces Chouteau where the building meets the sidewalk. The new facility will replace current facilities at 4381 West Pine and 3450 Park Ave.

The site would be cleared of a church and industrial building. The current assessed value of the site is $220,170 or $93,292 per acre. Presumably the facility will be tax exempt. Hopefully the facilities being replaced will be sold to private concerns and join the tax roles. Trivers is the architect. Park Central Development is recommending support for the project.  RMDH has ownership of the site. They expect to start construction next year and have the project completed in 2020.

About the church courtesy Greg Johnson- Emmaus Baptist Church bought the building when Emmaus United Church of Christ closed in 1976. Originally Deutsche Evangelische Emmaus Gemeinde or Emmaus German Evangelical Church, founded 1896. Also called Emmaus Evangelical Church, Evangelical Emmaus Church, Emmaus Evangelical and Reformed Church. These were the German Calvinists. Met at 4214 Manchester 1896 – 1897; then 4347 Chouteau from 1897.
From the County Library, which has their records: “Many members of this congregation were displaced when U.S. Highway 40 was constructed. When Emmaus Church closed in 1976, the building was sold to Emmaus Baptist church.”