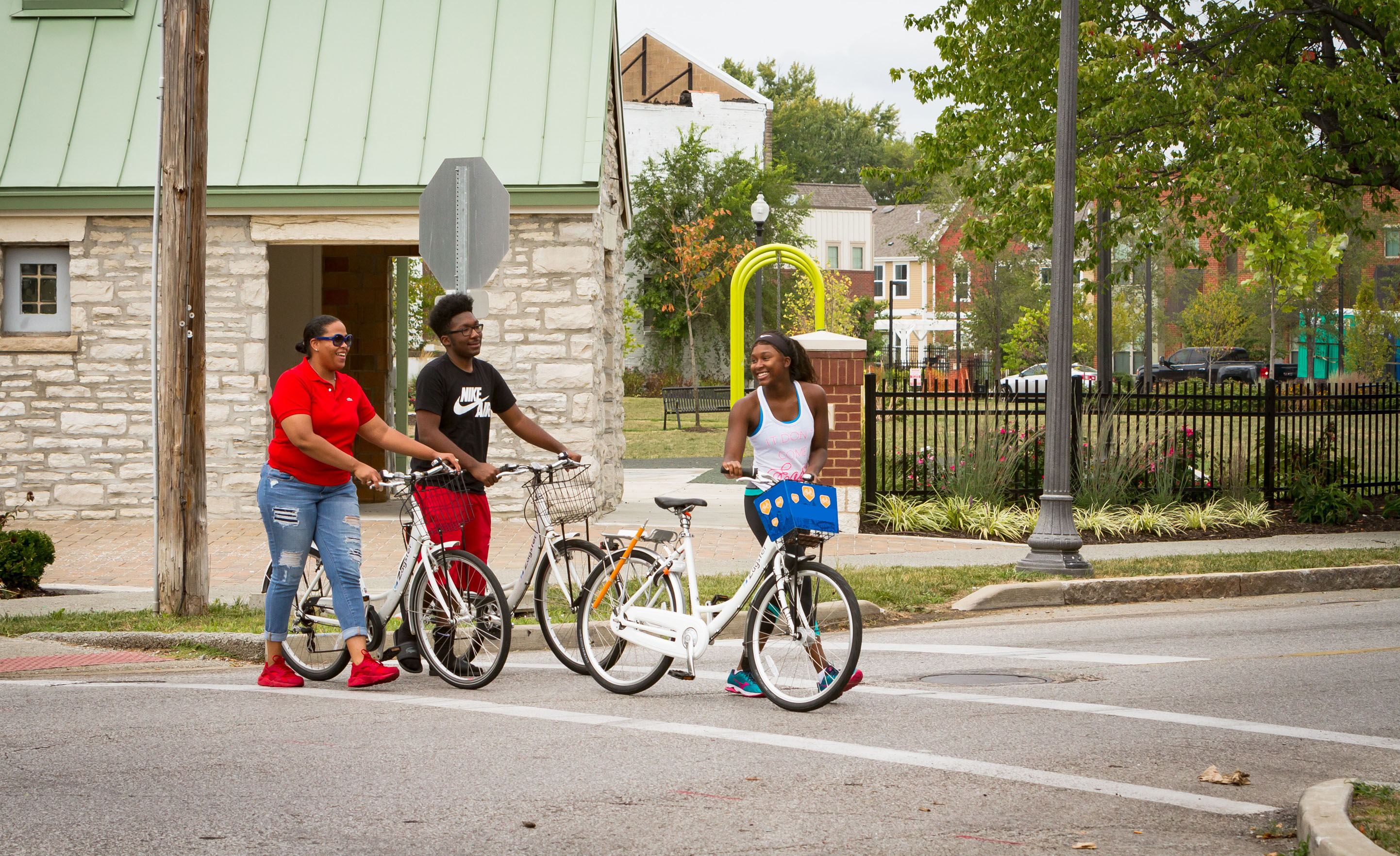 It may have been four years in the making, but St. Louis will finally have bike share as of today, April 16, 2018. Two private bike share companies, LimeBike and ofo, have received a permit from the City Streets Department to operate their dockless bike share system on the City’s streets and public space. Now, what does this really mean? First, this didn’t cost taxpayers a cent (in fact the companies paid permit fees). Second, you’re going to start seeing a lot of brightly colored bikes parked on sidewalks and bike racks. And most importantly, you’re going to have a whole new way to get around the city.

LimeBike and ofo will bring 750 bikes each to our streets for the first month of operation and will add around 350 more each month, with a cap at 2,500. That may seem like a lot of bikes, but because the bikes don’t have stations like the traditional bike share you see in Chicago or Washington, D.C., a high volume of bikes are needed so that users will always be less than a 5-minute walk from a bike.

The increase in convenience and accessibility is one of the biggest reasons this type of bike share is spreading rapidly across U.S. cities and campuses. LimeBike currently operates in over 30 cities and many campuses in America; ofo has over 10 million bikes in 250 cities and 20 countries, including around 15 cities in the U.S. So far, these systems have been successful in achieving higher ridership than their station-based counterparts in similar cities. Although the first dockless bike share program in America opened in May of last year, they are quickly becoming an integral part of the transportation options in cities of all shapes and sizes.

When we were putting together the permit for St. Louis, we looked at Seattle,; Aurora, Colo.; and Durham, North Carolina’s permits as a template for ours. You can view the permit here. The main requirements placed on the companies are safety standards, maintenance and operation standards, data sharing, and social equity.

That last one is hugely important because, in the past, bike share was usually run by a non-profit or government entity. Without that public ownership, it is vital the private companies are still responsible for making bike share equitable and accessible to all. Therefore, companies are required to have a non-smart phone option and a non-credit card payment option. Additionally, companies are required to maintain 20 percent of their fleet in designed Social Equity and Inclusion Neighborhoods, which include areas approximately between Delmar and Natural Bridge, and in the Dutchtown South area. Although these neighborhoods do not have the density of people or destinations that companies often look for when deciding where to maintain bikes, it is important that these neighborhoods, which have many households of low income, zero cars, and people of color, have access to this new, affordable transportation option.

Additionally, these neighborhoods are an easy one-to-two mile bike ride from MetroLink and the many jobs, institutions, and amenities in the central corridor, making biking a viable way to improve access to daily needs. Trailnet, with funding from Great Rivers Greenway, also plans to dedicate about $8,500 in bike share education classes in these neighborhoods to ensure residents know how to use the system and bike safely.

These bikes are very easy to use. First, download the smartphone app for each company (LimeBike app, ofo app) and create an account. Add money to your account – rides are $1 for 30 minutes, with discount options for students, people of low income, and packaged memberships. To use the bike, open your app and scan the QR code on the bike. It will play a delightful jingle and the bike will unlock. You can now ride the bike to your destination, then park it legally (on a bike rack, or on the strip of sidewalk between the walking area and the street – see app for more instructions), and lock it up by pushing down the red tab on the back wheel lock. You now have a point-to-point way to make those pesky short trips to get to transit stations, to work, to run errands, or to visit areas with limited parking or congestion that makes driving inconvenient (think: Forest Park on a sunny Saturday, Downtown on game day). Plus, you get a little exercise and will probably be happier doing it.

The biggest learning curve for bike share in every city that’s experienced this has been parking, and St. Louis will be no different. Before users learn the right way to park, some bikes are inevitably going to end up blocking pedestrian traffic or driveways and doorways. Bikes will even likely end up in some funny places, like in trees or rivers, as they have in every other city. My message is: DON’T PANIC. The companies expect this for a period, and the incidents of vandalism drop off as time passes. Additionally, users will learn to park correctly. Also, LimeBike and ofo staff will be circulating through the city to re-park incorrectly parked bikes. Lastly – these are bikes, so unlike the several ton automobiles that often are parked incorrectly in our city, you can pick them up and scoot them over a foot so they are out of the way.

To be a good bike share citizen, take a look at this guide put together by LimeBike on how to park correctly. Also, pay attention to messages in the app because there are some places, like Forest Park and Washington University’s campus that have additional restrictions on where to park.

Many people and organizations have worked to bring bike share to this region. Great Rivers Greenway completed a feasibility study and business plan with lots of community engagement in 2014. Bi-State Development led the Bike Share Working Group in the refinement of that plan and identification of implementation options in 2017. Finally, the Bike Share Working Group transitioned the project over to the City of St. Louis, who wrote and passed this permit and will manage and enforce the program. But that doesn’t even begin to paint the picture of all the groups and individuals who have helped in so many ways. These are all people who believe in St. Louis’ ability to grow quality of life and the economy of this region through solving problems that our citizens face – problems like transportation.

Bike share is a solution designed to improve peoples’ ability to get to work, school, healthcare, friends, and experiences, in a way that is affordable, healthy, convenient, and connects with our existing transit system. Bike share certainly won’t solve all our quality of life and economic problems, nor will it even solve all our mobility challenges, but it is a piece of the puzzle that can serve as a template for how to use public/private partnerships and be open to new ideas and technologies that can help us make St. Louis the best it can be.

Liza Farr works on transit-oriented development and bike share at Bi-State Development and is an avid bike commuter and transit user. Liza is a Midwesterner at heart growing up in Lawrence, KS, and went to Claremont McKenna College outside of Los Angeles, CA for a degree in Environment, Economics, and Politics.