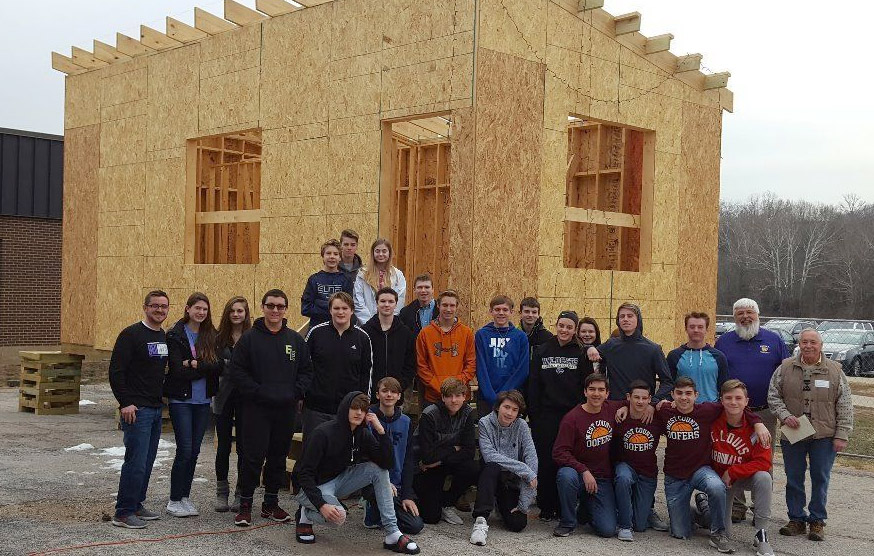 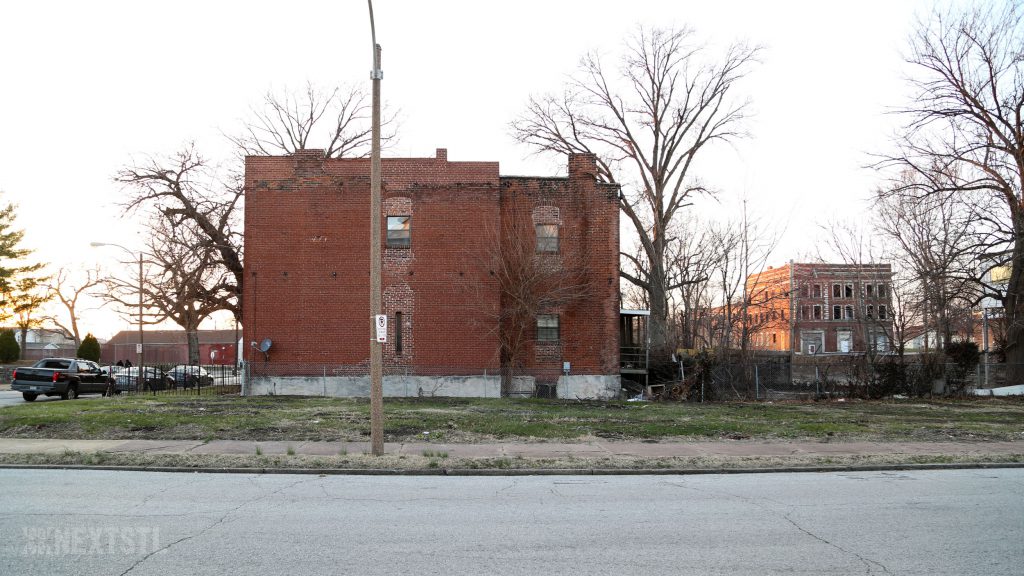 The project had garnered crowd-sourced support through GoFundMe, describing the ideology of the project in addition to the logistics: “Tiny houses are cost-effective and are being used in other cities to address the issues of homelessness. St. Louis can be next. Together, all of us can make a difference in the lives of those who face this trauma.”

Tackling St. Louis’ vacant spaces, slim funding for human services, and the immediate need of our city’s unhoused citizens, the campaign has already reached over $35K in donations. According to their campaign update, construction started two months ago in partnership with two area high schools.

Dianne Marshak directs the project under Social Justice 4 All (SJ4A). “No one should have to live on the streets,” she says. “Shame on our society for not solving this issue.”

Since society at large has failed, Marshak took matters into her own hands. In 2016, Marshak met Father Gary Meier, then-Executive Director of NGNS, and the tiny house idea took off. As part of their grassroots outreach, NGNS and SJ4A reached out to local churches, which led them to one enthusiastic parishioner’s school district for a partnership: Rockwood, where students’ 2017-2018 curriculum included constructing two tiny houses. 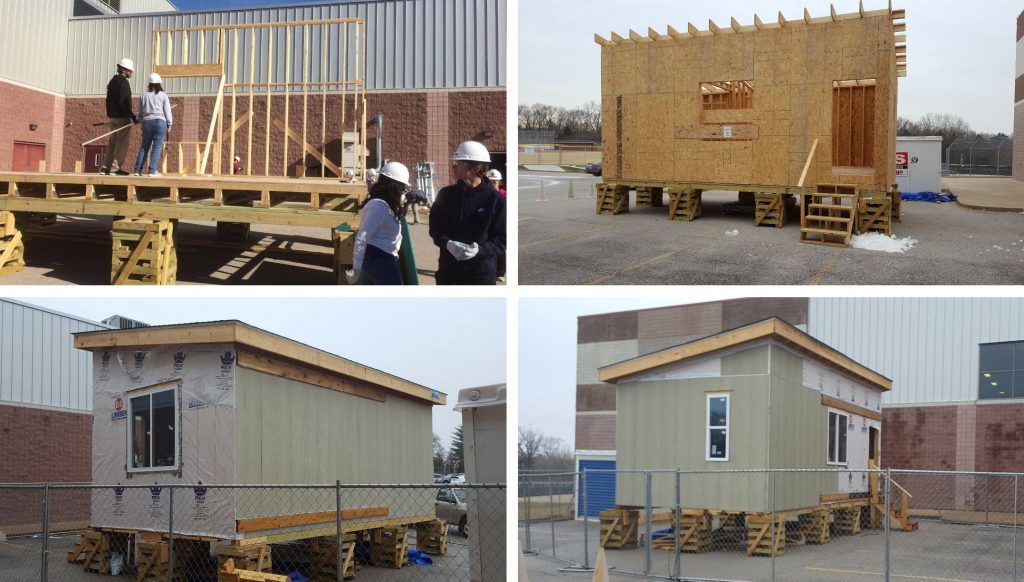 Mike Baldwin consults on the NGNS project and is also an organizer of the Common Good Tiny House Coop in St. Louis. While many nonprofits define long-term housing as 90 days, Baldwin is unsatisfied.

With the City’s January 2017 estimated average of 1,336 people forced onto St. Louis’ streets at any point in time — not including the housing insecure, which Baldwin estimates would total around 3,000 if the City could count both today — efficient and cost-effective housing solutions are key.

Baldwin, a preservationist who lives in North City, has experience both with rehabbing and new construction. While he contends that both should be on the table, tiny houses can offer simpler designs, the ability to reuse materials, and construction with energy and water efficiency in mind.

“Honestly, energy is a huge cost of housing. If you get behind on your gas bill, you can get evicted. There’s a large percentage of people on the streets who are there because they fell behind on their gas bill.”  The NGNS project called on architecture design from local universities to create the most energy-efficient models, removing the barrier of high utility bills.

Another point Baldwin stresses about why clusters of tiny house communities make sense for addressing homelessness is that not everyone is suited to live alone in an apartment — which is what many services offer. In his view, services provided by or partnered with the City, such as St. Patricks’ Center or Biddle House, only a “one-size-fits-all” path to housing with one bedroom apartments. Mutual aid and sense of community are strong among many homeless populations, and isolating people who have been relying on each other for survival and companionship can make apartment living difficult.

“In one case, a woman was given an apartment and supportive services, but her best friend on the street was not,” Baldwin recounts. “She worried about her so much that she left her apartment to be with her friend.”

Tiny house communities for the homeless have cropped up around the country as “little urban villages,” he says, and those kinds of communities have demonstrated better success in providing stable housing that keeps individuals from falling back into homelessness.

Barriers to new construction — and aid itself

With an affordable option and groups eager to begin work, tiny house communities could conceivably populate St. Louis already. But according to Baldwin, what gets in the way is a three-ringed barrier: over-regulation and slow processing of housing and zoning requests, lack of funding, and criminalization of homelessness and homeless aid itself.

It took many months just to get the NGNS tiny house project off the ground. Similarly, Common Good Tiny House Coop had to work with the City for over a year to get codes in line, and are still discussing zoning. Baldwin describes this as “stagnant” compared to other cities of equal size.

And there really isn’t time to waste. At least two people died from the cold this winter alone. Holly Schroeder does outreach for St. Louis Winter Outreach, and describes the need for beds as “critical.”

“With the closure of New Life Evangelical Center, there was a significant loss of emergency beds — around 200,” she says. “It’s the responsibility of the City to tackle this with nonprofit partners, but it keeps falling on the shoulders of the good citizens of St. Louis.”

This need could have been anticipated by the City after closing New Life, but Baldwin says that though money exists to alleviate homelessness, it’s not going where it should.

“Quit giving away all of our money to big developers who want to build apartment towers for millionaires,” he suggests, referencing work done by Team TIF to highlight where public money is funneled in St. Louis. While the city gives hundreds of millions in tax increment financing, tax abasements, and other types of financial incentives to corporations, homelessness services are limited to a maximum of $5 million.

“Claw back just one percent of our financial incentives into our Affordable Housing Trust Fund, and we’d house 15K tomorrow.”

On top of these barriers, advocates say that the individuals they serve live in a constant state of harassment when trying to find money or food. Mayor Lyda Krewson introduced Ordinance 67918 as an alder in 2007, “defining, prohibiting, regulating, and punishing the act of panhandling.” It became effective as of May 2008. Advocates and activists call this, as well as police presence and surveillance in city parks and forcibly removing tent encampments, ‘criminalization of homelessness.’

“Just today on the way to work, I saw a man who I know to be unhoused getting a ticket, probably for panhandling,” Shroeder reports. “On the second offense, the fine is a minimum of $50 and can go up to $500. How does that make any sort of sense? Poor people can’t pay fines.”

And it’s not only the homeless who get tickets and fines. Individuals making donations are often targeted, even though Jack Coatar’s bill no. 66 was not officially enacted. “I’ve had so many citations from the city for handing out tents or food,” Baldwin laughs. “They wrapped up all my citations into a felony against me. These things are just impediments to addressing the real problem.”

Advocates met with Mayor Krewson recently, and local activist Lisa Winter provided a live broadcast of the conversation for a public record. As of January 11, City officials finally admitted gaps in their homeless services.

“But again, these are emergency solutions, not permanent ones,” Baldwin points out. “Once winter is over, we can all look at the bigger picture. The City needs to listen.”

Though Baldwin has faced many challenges with his projects in St. Louis, has also seen hopeful action unfold in his city.

“Everyone is seeing that the extreme cold this year brought out the best of STL.” He believes that this energy can easily be focused on permanent housing projects, and outreach to get folks to them.

Baldwin has been involved in homeless housing projects around the country, and has seen vibrant opportunities and solutions available. He says that if St. Louis streamlined its licensing and zoning, tiny house projects wouldn’t take two or more years to finalize plans. Additionally, since varied housing is needed, the City could offer incentives to property owners who want to offer low-income housing, removing red tape and fees.

Shroeder also sees immense potential in the people of St. Louis. “We’ve got some really amazing people in our ranks — people who just absolutely blow me away with their dedication and compassion.” She stresses that at the end of the day, the will to help unhoused people comes from a place of active compassion, and it’s a position the City of St. Louis must take.

“[Being homeless] is not necessarily the result of bad choices.” Shroeder explains. “And even if it was? So what. Let’s work on what we’ve got today.”

Olivia Engel is a St. Louis native and a resident of St. Louis County