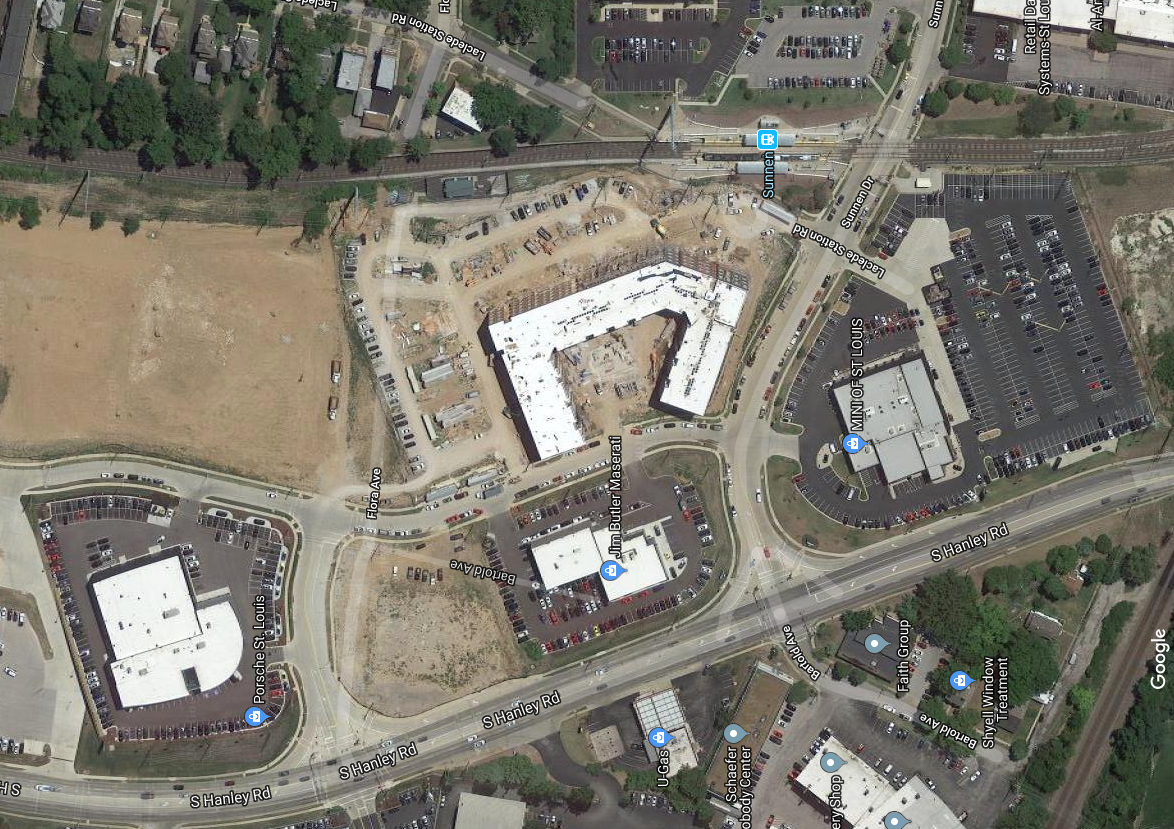 We must achieve nearby land productivity commensurate with the infrastructure built to serve it, otherwise we will go bankrupt trying to maintain and operate that infrastructure. We have spent billions of dollars on the construction and operation of Metrolink since its inception in 1993. We’ve seen it leveraged to varying degrees in the St. Louis region, often falling short of the potential intensity it can support.

The choice of routes is done by East-West Gateway, our Metropolitan Planning Organization (MPO) and its operation by Metro under Bi-State Development. They are both regionally-oriented organizations. However development around Metrolink is under the auspices of municipalities and counties, so we see #fragmentation and the perverse incentives it creates influencing land use patterns. 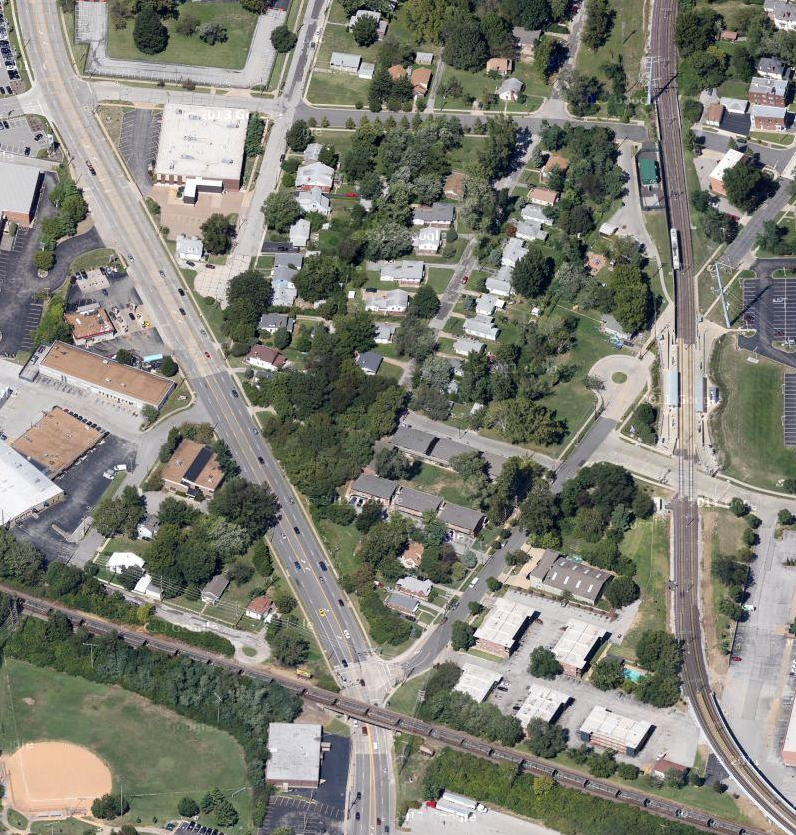 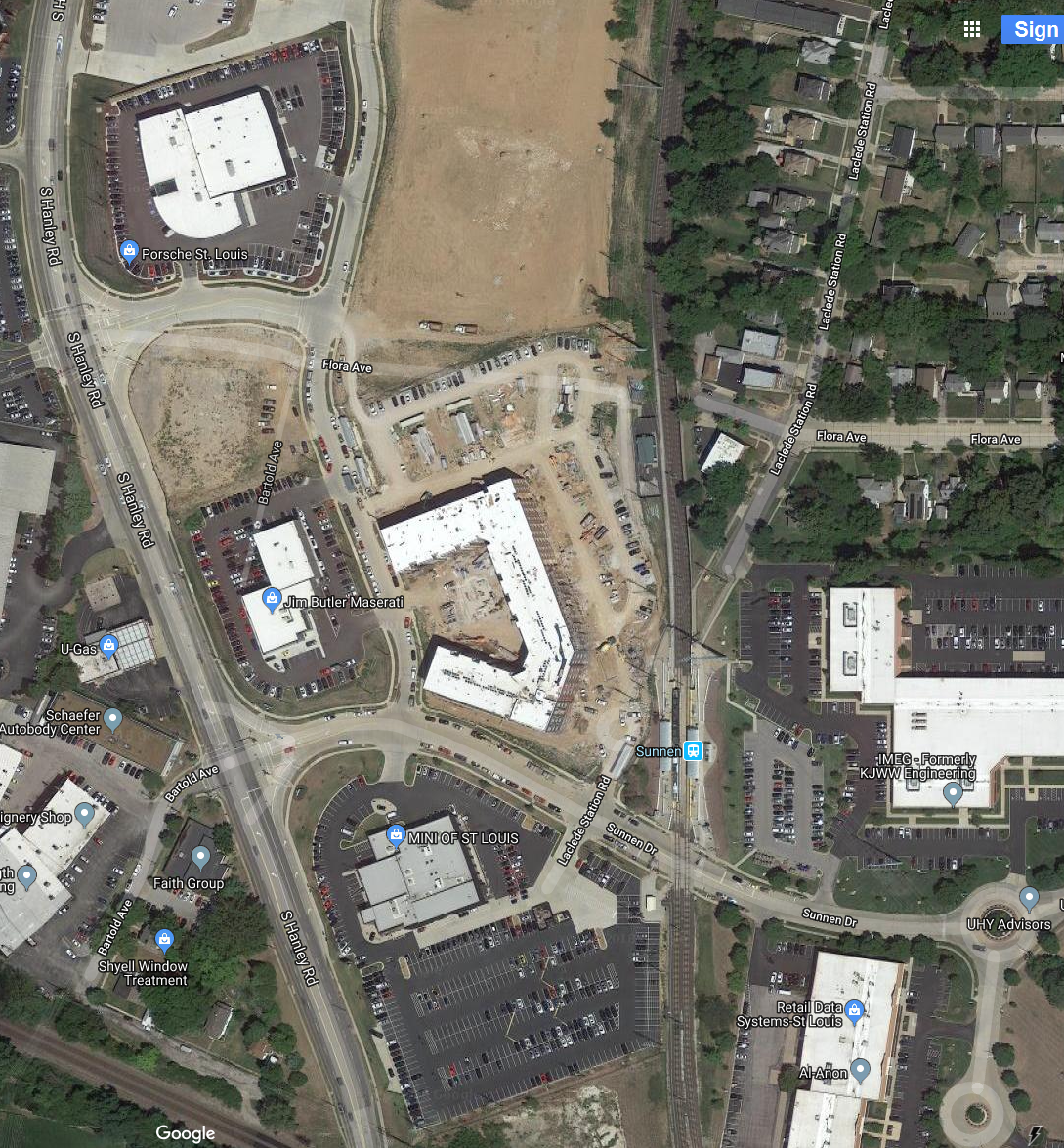 Around the Sunnen Station in Maplewood the land uses are anything but transit oriented. The already existing business park to the east wasn’t built at a human scale, rather at a low-productivity auto-oriented scale. No wonder it’s been the least popular station in the system. The clear-cutting of 32 acres of land on the west side presented an opportunity to do something different, leveraging the amenity the public put there to enhance land productivity. Three car dealerships and a large apartment building have risen. Seeking land uses that intensify incrementally over time may have been a better course. 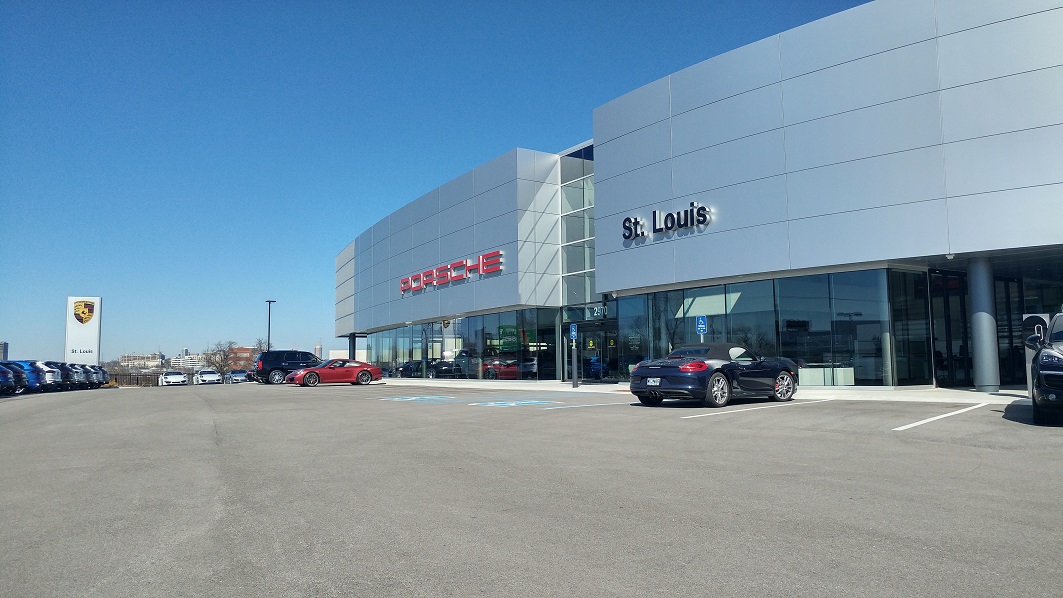 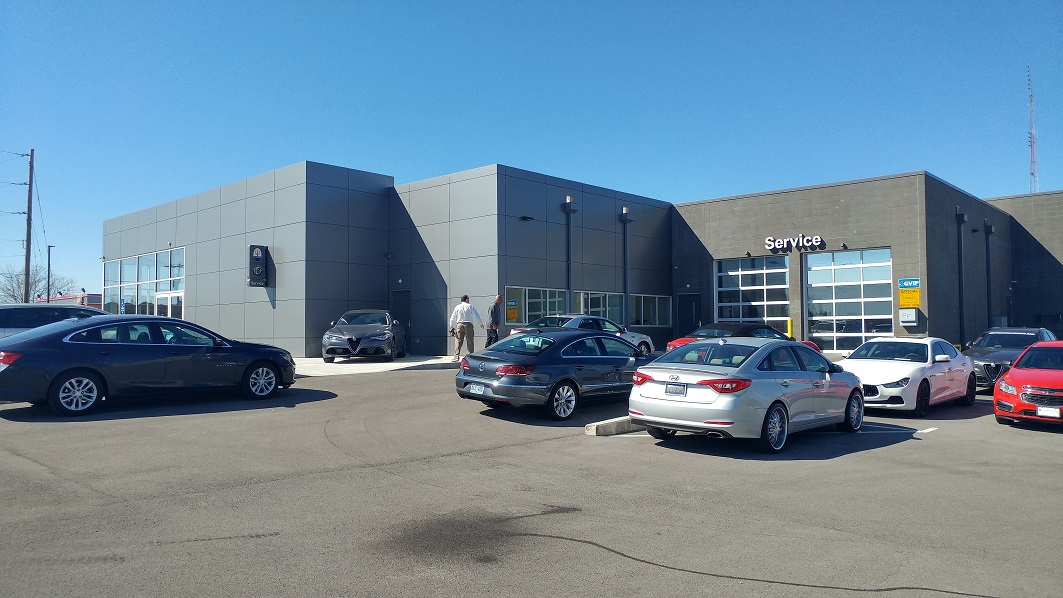 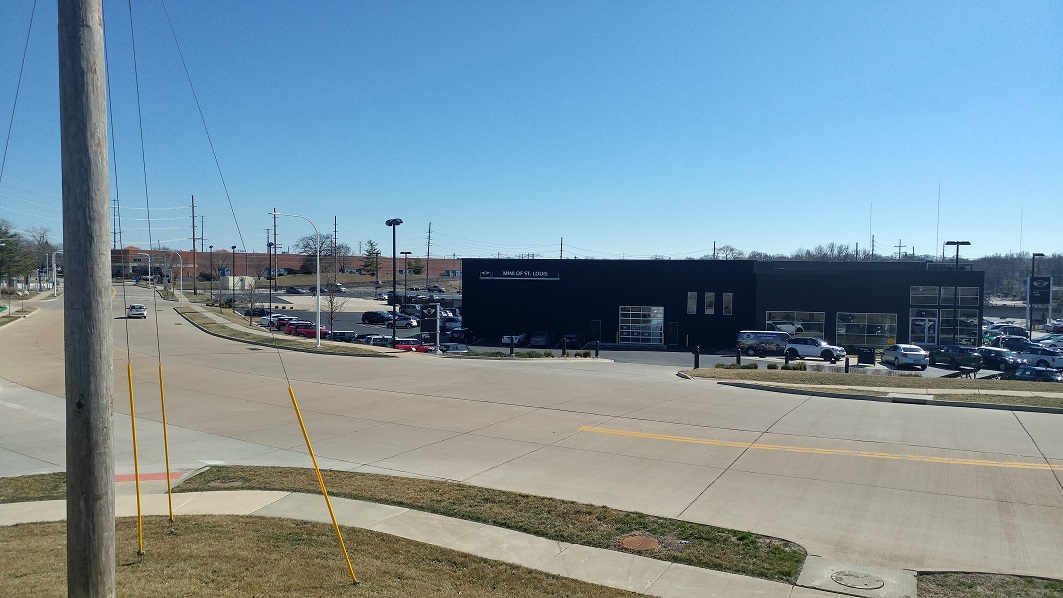 The Mini dealership has an assessed value of $304k per acre. The single story building housing the Pawn and Jewelry shop and Eddie’s Guitars at 7362-4 Manchester has an assessed value of $1.4M per acre. At its peak, soon after it has been built, the auto-oriented development pattern lags far behind the traditional. Do the sales tax receipts, that seduce so many of our municipalities, of the dealership make up the difference?

And there’s the fragility of the coarse-grained development pattern we see here. If the Mini dealership closes, all 5.73 acres becomes unproductive. If it had 64 little buildings (5.73 acres / 0.09 acres) with the likes of Eddie’s Guitars, there would be many different owners and operators each with their own risk profile. It all failing at once would be much less likely. 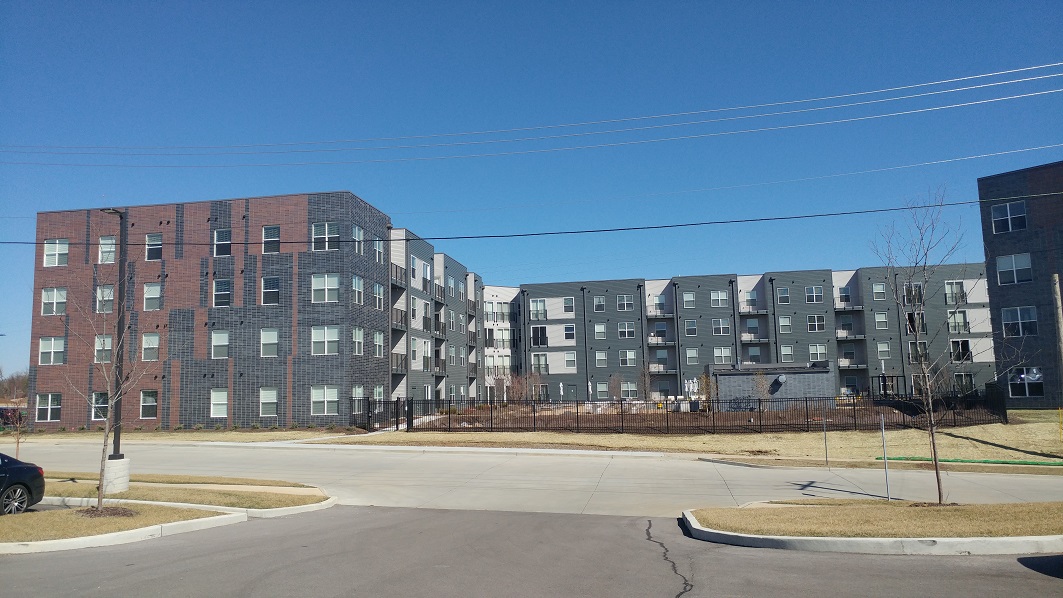 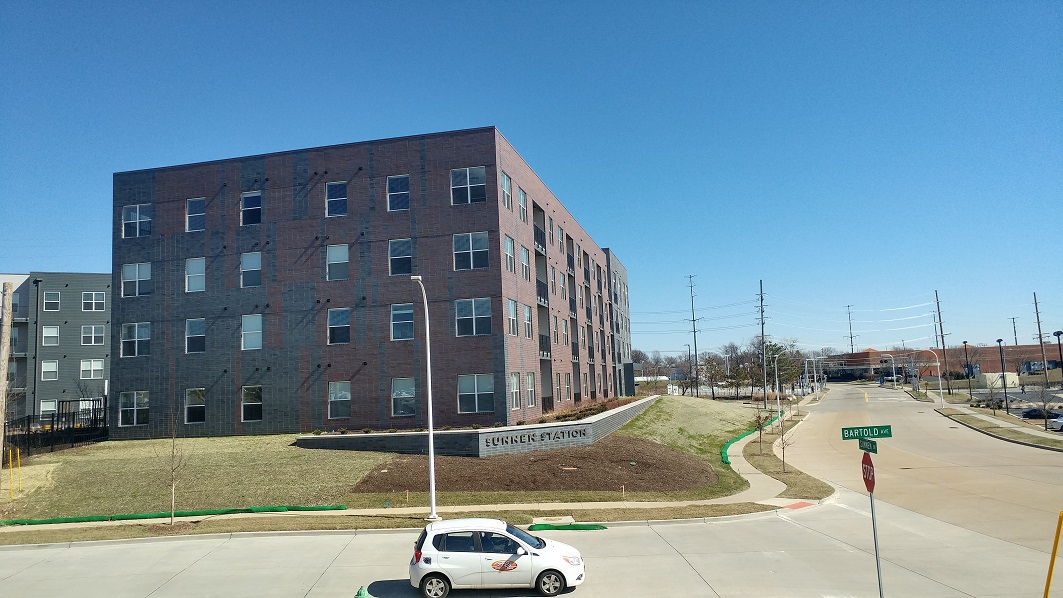 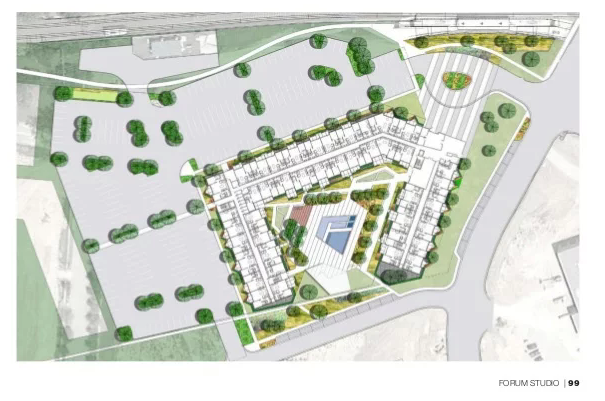 {The Sunnen Station Apartments don’t interact with the street and parking consumes over half the parcel.}

Perhaps the mistake was putting Metrolink here in the first place. Do we put the cart before the horse hoping TOD will result from transit rather than placing and scaling transit to meet current and expected land uses? If we are going to build more Metrolink, should zoning authorities be required to change their codes to embrace it? Otherwise, like so many of our stroads, it will persist as a liability rather than becoming an asset.