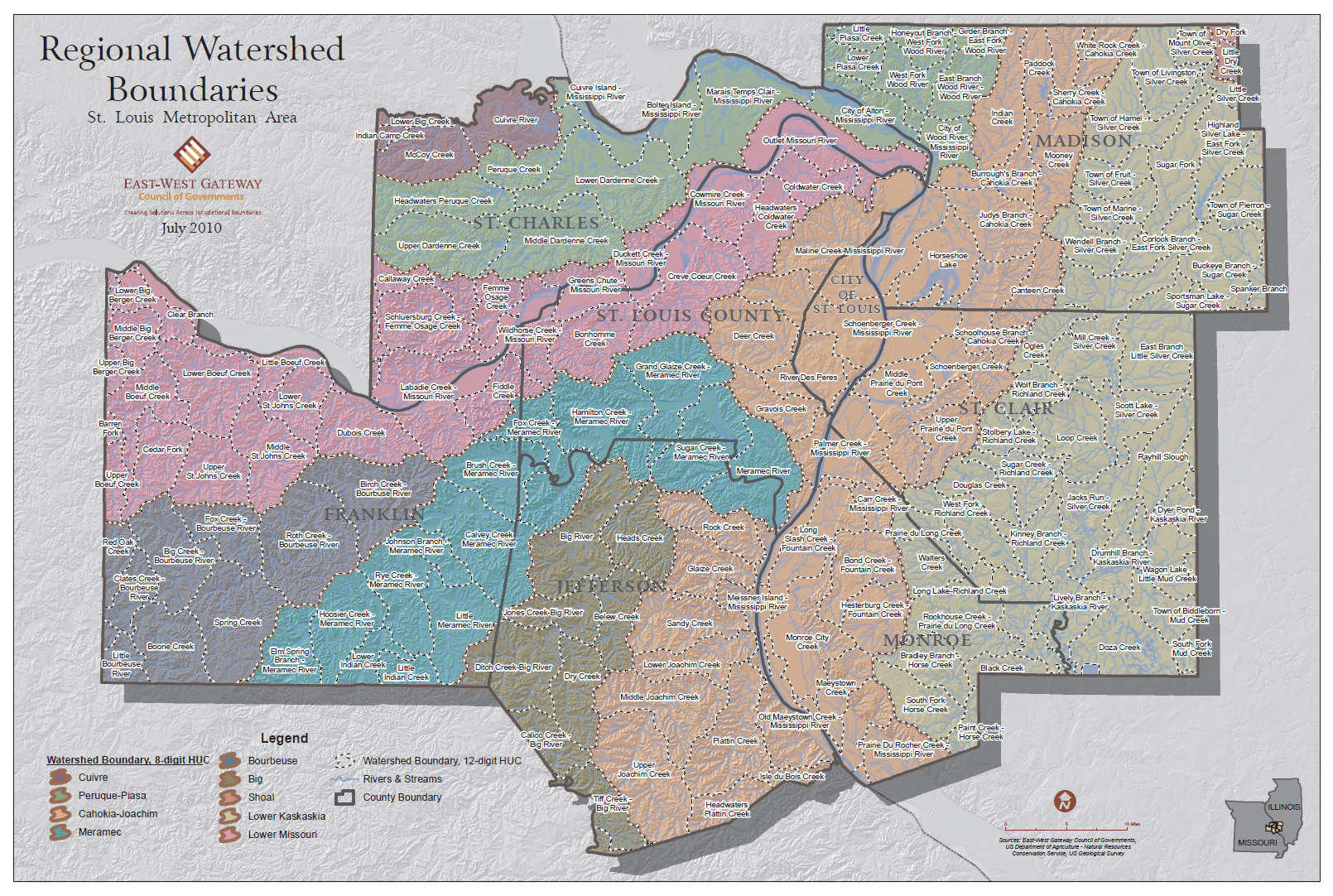 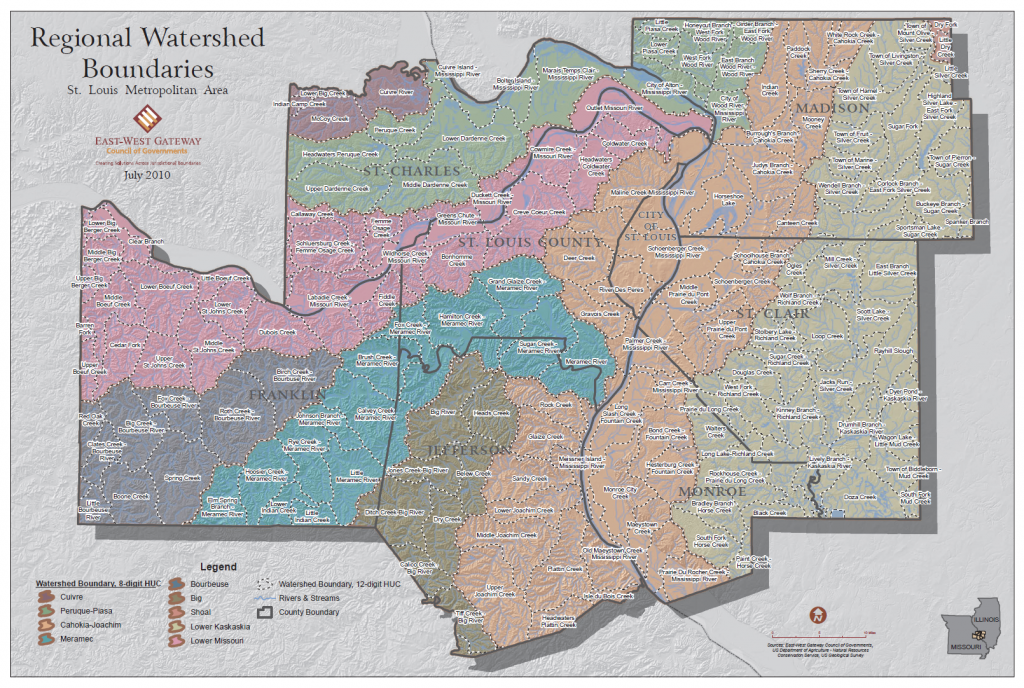 In February of 1954, voters in the St. Louis region, City and County, voted to establish a single, unified sewer district. This district would come to encompass the entire region and assume responsibility for the planning, construction, and management of the sewage infrastructure for every municipality in St. Louis. This was consolidation done right. Who would argue that we should go back to a system of fragmented sewer districts?

Here are a few poignant passages from the charter of the Metropolitan St. Louis Sewer District (MSD) as written in 1954:

“This Proposed Plan for a Metropolitan Sewer District is presented in the sincere belief that its adoption will enable the people of St. Louis and St. Louis County to solve critical sewer problems in a sound and equitable manner.”

“The problem has been shown to be one which cannot be solved within either City or County alone, but requires that it be treated as a whole. The City limits are but an imaginary line as far as disease and drainage are concerned.”

“We must remember that the transmitters of disease do not recognize the City limits line. Flies, mosquitoes, and other disease carriers may breed in the City or in the County and they may also contact disease organism either in the City or the County[.]”

“[P]iecemeal efforts to provide adequate sewers in the County have failed because municipalities and sewer districts individually cover less than a whole watershed and because in many cases they lack the financial resources to do the job.”

“The reason our sewer problems cannot be handled by City or County separately, is simply that most of the industrial, commercial, and residential property in the County is on comparatively high ground and drains downhill through the City of St. Louis. Since the sewage water runs downhill, its flow must be properly channeled and controlled by one overall authority from its source in the County through various municipalities and through the City of St. Louis to its eventual outlet in the Mississippi River. Health authorities, contractors, engineers, and the staffs of both the City and County law departments are in accord that the sewer problems should be handled on a watershed basis rather than according to arbitrary boundaries of county, city, village, or sewer district.”

First, allow me to take a moment and relish that lurid description of, literally, shit flowing from the County into the City of St. Louis.

The Joint Interim Committee behind MSD made the argument that individual municipalities were unable to effectively provide their own sewage and drainage services. This wasn’t a knock against any particular municipality’s leadership. The scale of the problem was simply too big and distributed. Regional watersheds were larger than any one municipality and water naturally flowed downhill from St. Louis County, passing through several towns, through the City, and finally flowed into the Mississippi River by path of least resistance. Sewage moved with this water and, if handled improperly, could lead to disease. Disease easily crossed borders, irrespective of where it originated. There were very real consequences. It was a reasonable argument which said, essentially, here is a problem, with severe negative repercussions, which can only be solved when we coordinate on a large scale.

It was put to the voters of St. Louis in 1954, and it worked. To this day, MSD draws resources from the entire region and provides a coordinated sewage management platform from which we all benefit.

In fact, this pattern has been repeated several times over the last 60 years.

In 1950, Bi-State Development was formed to coordinate freight, public transportation, and river traffic. In 1965, East-West Gateway Council was created to help develop regional policy. In 1969, the Museum-Zoo Special Taxing District was created to share the burden of supporting our cultural amenities. This is what St. Louis consolidation looks like.

Lately, I’ve heard rumblings of support for State sponsored legislation forcing the consolidation of the St. Louis region. I think this is a bad idea which reeks of desperation. I get the issue people have with fragmentation: It’s a problem which needs to be resolved. But to assume that a single piece of legislation coming from MOLeg could solve such a complex problem belies a deep sense of ignorance.

This is not an issue which can be solved with a single vote. It may be tempting to point at Louisville, Indianapolis, or Nashville and say, “See! They voted to consolidate and now they’re doing better than us!” As I’ve written previously, consolidation in these cities has not led to the stunning reversal of fortune that many in St. Louis hope will happen to us. The Louisville consolidation was essentially a merging of Metro Louisville with unincorporated Louisville County (most of the individual towns remain in existence). The Unigov model in Indianapolis involved the merging of top level city and county governments, along with the elimination of County Executive. Again, most small municipalities remained in existence. I don’t particularly find these examples to be very inspiring or noteworthy.

Do we want to merge the Board of Alderman with the County Council and fire Steve Stenger (Unigov model)? Do we think it would be effective for St. Louis City to absorb certain areas of unincorporated St. Louis County (Louisville model)?

The answer is, no. We don’t. This leads me to my next point.

The myth of leadership

First of all, let’s drop this idea that our elected officials have had a meaningful impact on the destinies of the various municipalities in St. Louis . St. Louis City isn’t poor and crime ridden because of who we voted into the Board of Aldermen. Chesterfield residents are not making $96k per year on average because of their responsible Republican leadership. Throughout the 20th century, the middle class had been incentivized to move away from urban centers and into the suburbs by cheap land, federal subsidies, and the advent of the automobile. It doesn’t matter who sat in City Hall Room 200, there wasn’t anything they could do to stop this wholesale loss of financially secure families and tax revenue. I won’t even get into the macroeconomic forces and technological advances which continue to siphon money and talent away from the Rust Belt to this day, but suffice it to say that city leadership isn’t solely responsible.

The next myth that needs to be dispelled is this idea that local government is some sort of monolithic entity which is being piloted by our elected officials. The level of control that a Mayor or a Board of Aldermen has over the functioning of the government is tenuous at best. In reality, large bureaucracies are unwieldy and difficult to manage. Power gets delegated out to smaller departments. Any blame you want to place on the current struggle of St. Louis has to be distributed among the hundreds (or thousands) of competing personalities, each playing their own small part in the massive work of maintaining our civic structure.

For a consolidation to be effective, we’re not just talking about merging the top-level offices of St. Louis City with St. Louis County, or some variation of this idea. Consolidation will require the surgical integration of hundreds of governmental departments, each with different leaders, missions, and ideals. It will require the untangling of a deeply complex network of taxing districts, employee benefits, assets, and debts.

When you start to appreciate the immensity of the problem, you come to realize that this cannot be accomplished with a single vote by MO Legislature or even a vote by the people of St. Louis.

Let’s make it worth our while

No matter what, any talk of consolidation is going to be contentious. So let’s not waste our time trying to drum up votes for an impulsive top-level consolidation or redistricting plan which might make us feel better, but won’t actually fix any problems. Let’s take a lesson from MSD and define a unique problem, show the negative effects of this problem, and then argue why it can only be accomplished in a coordinated manner.

Here’s an idea, let’s consolidate the police service for our region. Is that contentious enough for you? Police consolidation is not completely unheard of. The watershed of crime vastly outsizes any individual municipality. It certainly doesn’t respect borderlines.

Crime rates are typically driven by a small number of people offending at a very high rate. Most of the people who live in dangerous neighborhoods are just as afraid of the crime as you are. Police seem to be most successful when they are embedded at the street level. When the Gang Units know the names, faces, and addresses of the major players, they can apply pressure in all the right places with great success. But this isn’t easy. It requires coordination: the sharing of police knowledge and resources throughout the region. Currently, we have 60 different police departments with vastly different pay scales and workloads. I don’t think our current crime problem has anything to do with not being tough enough on crime. I think it has everything to do with an ineffective police strategy and lack of sufficient street level knowledge on the part of these 60 police departments.

If we can successfully consolidate our many police departments into a single effective force, fairly and equally compensated throughout the entire region, then there’s no limit to what we can accomplish next. The debate would certainly be heated, but at least it would be limited in scope and clear on intent, unlike the many other fuzzy consolidation debates we’ve had over the last 150 years.

Jacob Rebe has been a North Hampton resident for 30 years. He is a graduate of Mizzou (B.A. Biological Sciences, 2010), works as a chemist, is a member on the board of the Kingshighway Hills Neighborhood Association, and writes for his website inmostcity.com