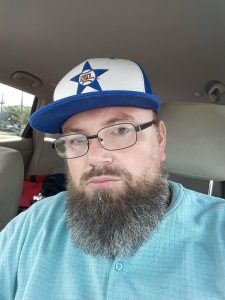 I had been interested in attending a political protest since I was in middle school after reading Soul on Ice by Eldridge Cleaver, Essays on Civil Disobedience while in St Louis County Juvenile Detention, and then working my way to The Autobiography of Malcolm X while attending high school at McCluer North. In fact, while attending regular McCluer for a semester I even unsuccessfully tried to organize a protest over the acquittal of the LAPD officers in the Rodney King beating case.

In 1992 I would get my first opportunity to attend a protest. There were only two young Muslim converts at the Islamic Center in Midtown St Louis. Myself and a young punk rocker from West County named Randy Royer (later to be known as Ismail Royer becoming a prolific writer and activist and later imprisoned for 14 years on trumped-up terrorism charges). Randy told me he was gonna be protesting at the 1992 Presidential Debate at Washington University along with his punk rock bandmates and a few others and I decided to join them.

Our small band of protesters ended up heading to the President George H.W. Bush post-debate rally at Forest Park community college where we were met by enraged Republicans. A crowd surrounded us and taunted us. A guy in the crowd pointed out my “X” t-shirt and challenged me to a fight. We were suddenly removed by friendly campus security. One of the guards asked us what we were protesting? We all gave different answers which led to chuckles from the guards. My first political protest was brief, uneventful, and not newsworthy.

Fast forward twenty- two years later and St Louis becoming internationally known for protest and the epicenter being in the North St Louis County of my childhood. I would be the first person to tell you I didn’t see that coming. Yet here we are.

One can argue, and I will, that the events of Ferguson paved the way for not only the international climate of protest and organizing against racism and injustice we see today; but it also served as a moment of radicalization for White Nationalists. These White Nationalists that were once Twitter trolls harassing Ferguson activists by 2016 were uniting to support the man they thought could “restore order” in America. Donald Trump.

With little to no chance of bringing about change from Jefferson City activists and others have looked to where they can realistically win. St Louis City and North St Louis County.  However, in doing this, they enter the treacherous waters of St Louis politics.

Years ago I wrote a piece for the now-defunct Arch City Chronicle outlining the “three political parties” of St Louis: white Democrats, black Democrats, and an emerging progressive and independent faction. At that time this new faction was most-associated with former State Senator Jeff Smith (who despite his great promise ended up in federal prison for violating campaign laws in a congressional race).

Today there are still three parties in St Louis politics. Yet all three are buckling under the pressure of activists, demographic changes, and gentrification.

The old South St Louis white Democrats are dying off. Their kids and grandkids are in the County or even places like Jefferson County. Catholic parishes are closing, residency for cops has been repealed, and the city doesn’t even have a CYC division anymore.  The St Louis White Democratic Machine is so depleted they ran a transplant for mayor (now Mayor Lyda Krewson)  and will probably run another transplant next (Chicago-area native and alleged Cubs fan Jack Coatar) and even went as far to run a North County native for Circuit Attorney. This isn’t the South St Louis of Mayor Cervantes by a long shot.

I once overheard former longtime St Louis Alderman, mayoral candidate and power-broker Freeman Bosley Sr say “most of our good reliable voters are now in North County”. The words of Bosley highlight the root cause of the stagnation and decline of Black St Louis Democrats (combined with division). A depopulated North St Louis and a black political class that showed bitter-division in the last mayoral election doesn’t point to a healthy future. It is hard to imagine a repeat of 1993 when an excited and united black electorate made Freeman Bosley Jr the first black mayor of St Louis.

Thus we move to the third faction. The independent progressives I saw as emerging years ago. While Jeff Smith is no longer in St Louis politics many others have taken his place and many much further to the left. Bolstered by urbanists, transplants with no political or local allegiances, ideological progressives, the Bernie Sanders presidential campaign, and the gentrification of several neighborhoods the third faction sees itself as ascendant.

The multi-racial campaign and victory of State Representative Bruce Franks Jr over the Hubbard political dynasty gave fuel to their ambition. Franks, the former battle-rapper turned politician, has been catapulted into political stardom and local celebrity powered by both his campaign victory and his prominent role in the Jason Stockley verdict protests. If Jeff Smith was change 2.0 Franks is change 11.0.

Yet with depleted St Louis wards and neighborhoods the door is wide-open for many agents of change. This will inevitably mean there will be elections when two or more are vying for the same seat. Such is the case in the 8th Ward Aldermanic race. Many local activists and progressives are supporting Democratic candidate Paul Fehler (myself included) while others are supporting the independent run of Annie Rice.  There will be the same scenario in the President of the Board of Aldermen race. Jamilah Nasheed and Megan Green will find themselves in competition for the same votes and endorsements. The third faction will be a major factor in that race and will likely be strained by competing loyalties and alliances.

These are natural growth pains. The pains from moving from protest to engagement with the system. Moving from talking about change to the actual implementation of change. From dreaming of running for office to actually running for office. Going from Tweeting ideas to actually having to compromise and come up with realistic and pragmatic legislation. Sometimes you need a flamethrower while other times you need someone with a flame that burns within.

Creating Community isn’t easy. Especially in a city as poorly organized as St Louis with a two and a half century history of institutionalized racial repression. Things can get messy. Those new to the game may not understand old allegiances or local nuance. Yet, if the energy of St Louis area protests has shown us anything it’s that there is a burning desire for change.

For some change is defined as something political. For others something cultural. For many others, especially the thousands of grieving families, the only change they’re concerned about is stopping the endless slaughter on these St Louis streets (2016 claiming more than 200 in the city alone). However it happens, one thing is for certain. The process of creating a new and different city merged with the old is well underway.

The question remains who will this new and different city be for and welcoming to? Will St. Louis go down the path that has made so many of our cities such as San Francisco, Austin, NYC and DC unlivable for the poor and working-class? Or will we find a kinder, inclusive and humane way to revive the city that lifts all boats? Will we be satisfied systematically removing the poor from our city into North County and then boasting our crime-rate and poverty-rate has went down or will these new leaders fight to improve the safety and quality of life for those already here? Will Shake Shack be our salvation as the homeless freeze to death in dumpsters? Will a bike-lane inspire someone on the bus hours a day because they can’t find meaningful employment in the city? If a refugee can shop at Ikea for new furniture does this negate the fact they can’t earn a living-wage and can’t even afford to shop? If you have to close your eyes and drink purple drank at night just to erase the pain and go to sleep can you be inspired by the proliferation of farm to table options? If technology has made your craft obsolete can you get excited by new craft breweries? These are the challenges and questions of creating community in St Louis. Questions that no one individual, group or faction has the answers to despite what they may claim. Those answers are within the conversation. A long conversation. We just need to ask the right questions.