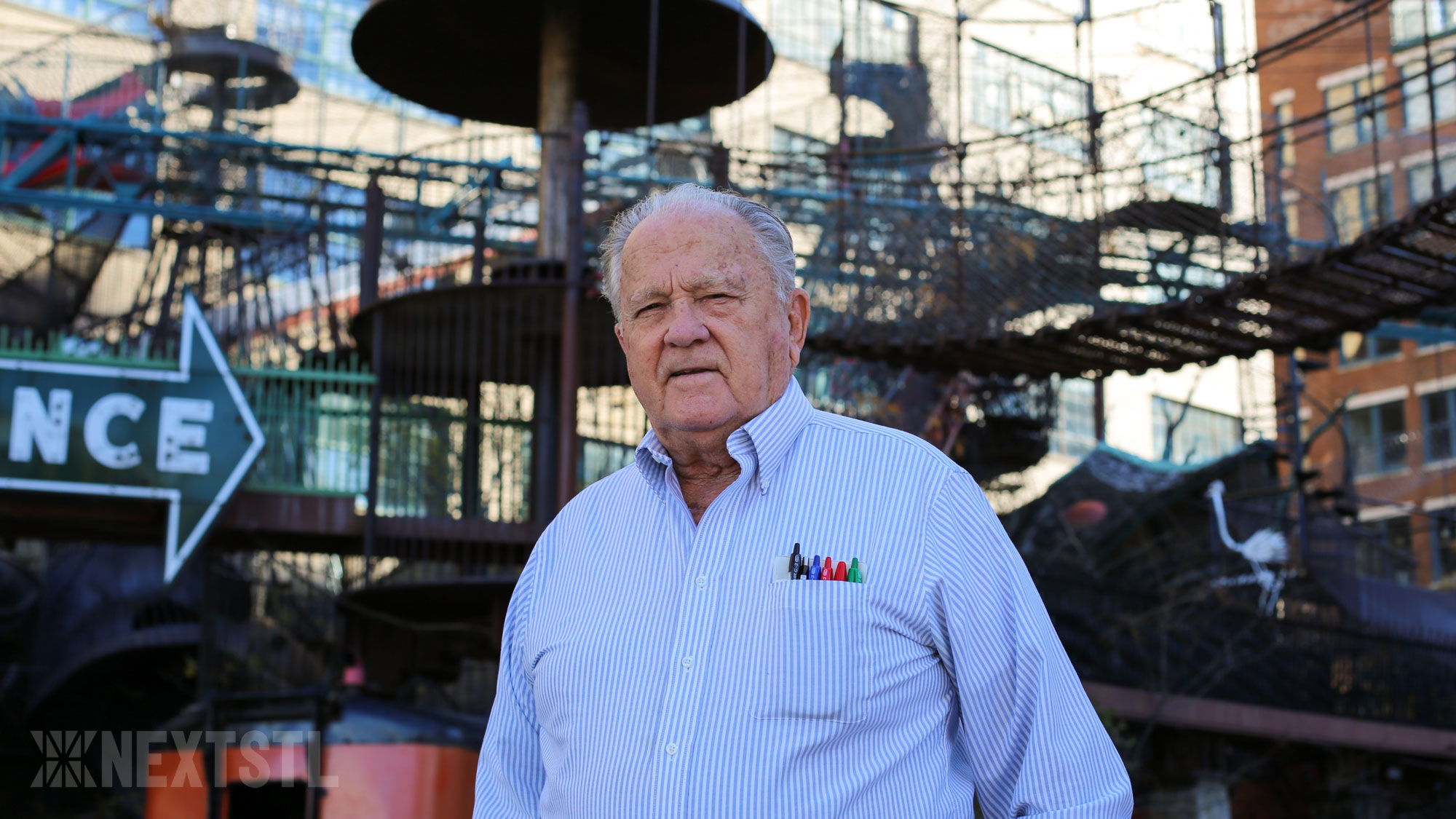 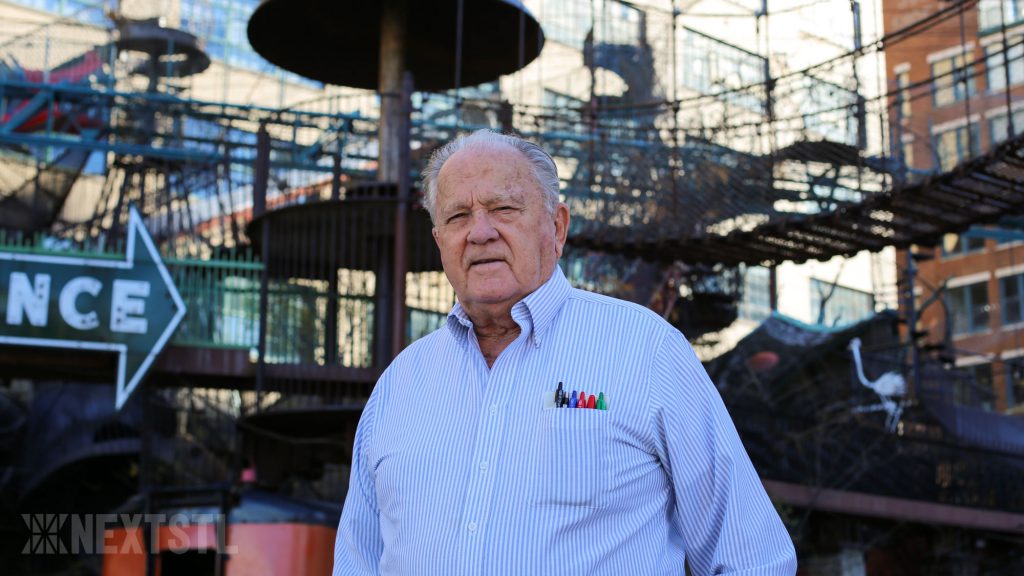 In some quarters of City Hall, Ron Fischer’s been known as “the Pretzel Man,” thanks to his fondness for delivering Gus’s Pretzels on his frequent visits to the building. As a structural engineer with close to four decades of experience in his field and with countless visits paid to City Hall over the years, there’s been no shortage of pretzels delivered downtown.

But it’s not as if he’s only a character with a fun, professional quirk. Instead, he’s a respected pro in his field, one who’s worked with clients great and small. His most-unusual gig (true for many people who’ve worked there) comes through the City Museum, where, for years, his fingerprints were found all over St. Louis most-talked-about cultural/tourism institution. Though not involved much these days, a lengthy chat with Fischer on the grounds yields all sorts of insights about the space, its builder Bob Cassilly, and the work required on such an ever-evolving project.

“I can’t remember the year, but it was over 10 years ago,” Fischer says. “It started with the bus on the roof. The city was about to shut the Museum down because Bob had erected that bus without a permit. That was my beginning with him. From then on, we got permits for virtually everything we did, working with a couple of different architects.”

The coupling, he says, was a solid one with Cassilly’s reputation confirmed by Fischer, who says, “Bob was just a genius. He had his degree in fine arts and basically was a sculptor. He’s got sculptures all over the world, many in Europe. He had an engineering sense that was unbelievable. Many times, when he’d get some of this equipment and wanted to install it in some place or another, he’d make a sculpture of the equipment and his ability to do structural design was every bit as good as mine. Except his was not academic, it was an inborn knowledge. What Bob had was an innate ability to do design, for the logistics of this place.”

Fischer spoke with some detail over the bits-and-bobs of the construction that’s taken place there, frequently pointing out specific examples of craftsmanship and design, executed not only by Cassilly and his famed Cassilly Crew; He’s quick to praise Rick Erwin, who in recent years has been the Museum’s go-to guy for acquisitions, as well as longtime crew member Mary Levi, whom, he says colorfully, “could weld a beam to a baboon.”

“There are 10 or 12 people working here in construction,” he says, “and they’ve all been here ever since I started. They’re equipped in every avenue. They’re stonemasons, carpenters, electricians, plumbers, heating-and-air-conditioning people. They used to do Bob’s beckoning and now they do Rick’s beckoning. Rick finds a piece of equipment and they’ll find a place to put it. They get inquiries, from time-to-time about equipment that’s available, like this tower right here. That was from Omaha, Nebraska.”

As he speaks, his eye moves around the perimeter of the lot and he points out small details all over; the backstory of a fence can spin for a minute, or two, as he recollects where Cassilly found it and how it was erected to fit the space. Several times he references a delightful phrase, citing Cassilly’s “horse sense.” That skill came in handy, in that only some of the ingredients that came onto the site did so with specifications; for example, as breathtaking as the roof’s ferris wheel might seem, it’s a piece of work that came with full specifications, the logs, diagrams and basic calculations attached.

Other projects, of course, were cinched together on the spot, like “Bob saying, ‘I want to build a bridge to a plane.’ That’s where I say he had a horse sense about engineering.” Almost all of these planes that are here, when they came, they came with a set of specifications which were the dead loads. And then we had coordination between Bob and I on how we were going to get people to them.”

Another example: the bus. Fischer says that early-on worries about the bus were never founded.

“Oh, that’s so much malarkey,” he says. “The bus, as he put it up there was very safe. Even though it sticks out over the building, the bus was very safe.” (As an amusing aside: “Now, there was a vibrating device. That thing would never work. It still is, as far as I know it, under the bus, but not wired up.”)

Fischer credits the building, itself, with being able to accept many of the challenges that Cassilly put forward. He wonders if the structure was actually begun for a taller building, as “they did everything too big,” with overly-generous live load capacity and footings that allowed for the considerable adaptations to the building over the years, without sacrifices to any structural safety. Only occasionally was there a need to scale back an original Cassilly vision.

“Inside the circus area,” Fischer recalls, “he wanted to hang some trapeze and have the ceiling opened. We’d have discussions on how much we could open up, how much of the floor we could dispose of and have a two-story access to the trapeze.”

While these are not conversations that most engineers have, Fischer says that “Bob was a very rational person. I think that if the City had left him alone, everything would be virtually the same.”

Cementland offered another host of possibilities.

“Bob had a lot of good ideas,” Fischer says. “If you walk the grounds, you realize that he finished a lot of it. In fact, it probably would’ve opened that next summer (after his passing). Even if just a part of it, to help generate some income. He was building a canal, there would’ve been boats to circle the perimeter. A big waterfall inside one of the buildings. He had many dreams.”

After Cassilly’s untimely passing, Fischer did once hear from a group in Oregon, who were entertaining a City Museum-like amusement there. That project never came together, but they seemingly reached out to the right guy while undertaking their due diligence.

Not planning to retire anytime soon, Fischer stays busy with his small firm, Pat-Ron, an amalgam of he and his wife’s first names. Fischer says that he gets calls “all the time” and takes on as many clients as make sense at a given time, recently adding an associate to his office. Of late, a lot of his work’s been with Arcana Distilling, which is building out a distilling facility in town; he recently did work with Earthbound Brewing on their new facility, as well.

No matter the size of the customer, Fischer says that he approaches each job with a similar sense of purpose, providing the nuts/bolts technical feedback. Simultaneously, he allows the clients to puzzle out the other elements, be they aesthetic or financial.

“I try to stay out of the money part,” he half-jokes. “I’ve always done that. It’s in my best interests to lend a structural opinion and not lend much of a financial opinion. They know better than I do what they can do with their money that they have. The folks that guide these things are always unique and I love that.”