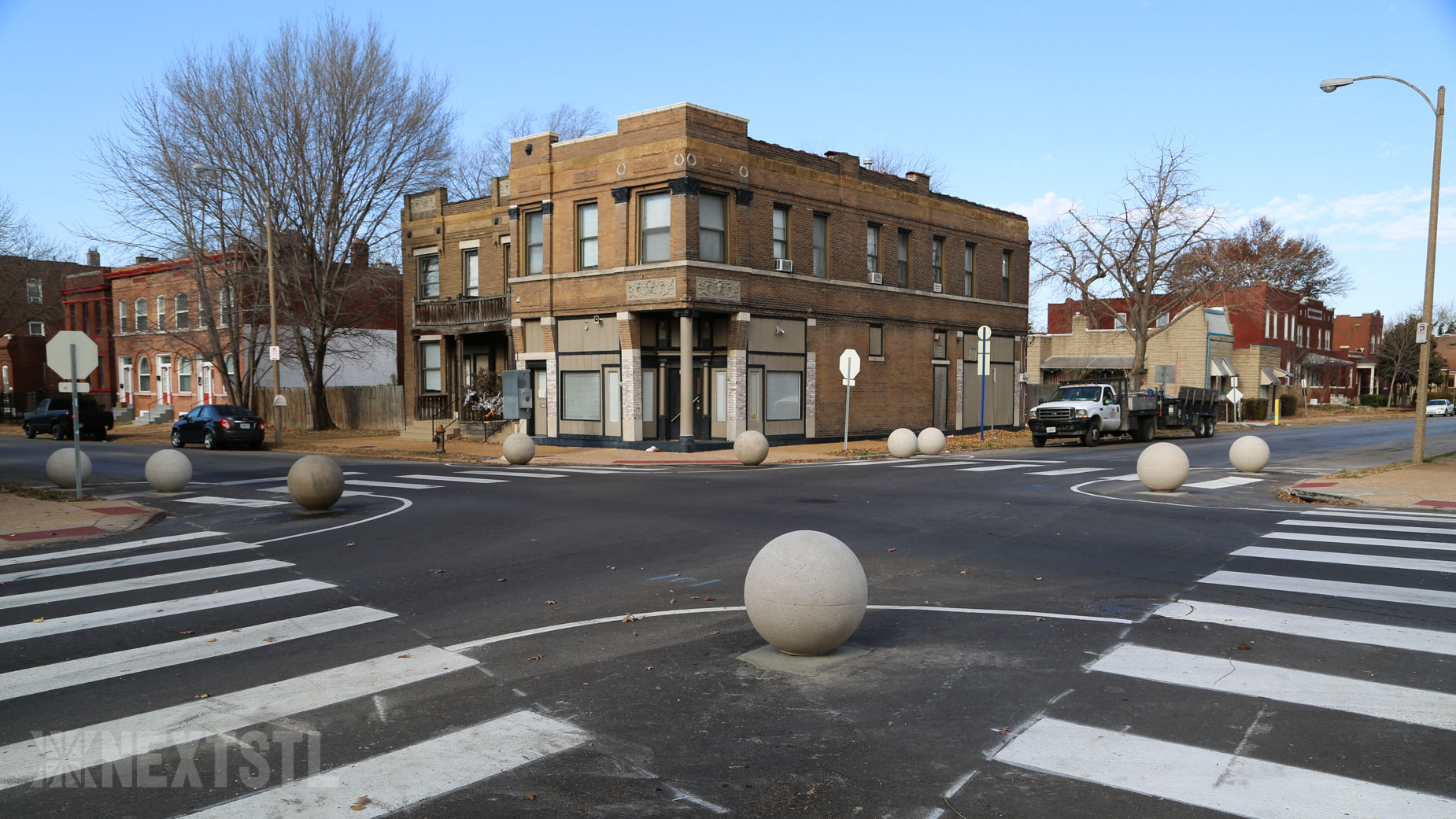 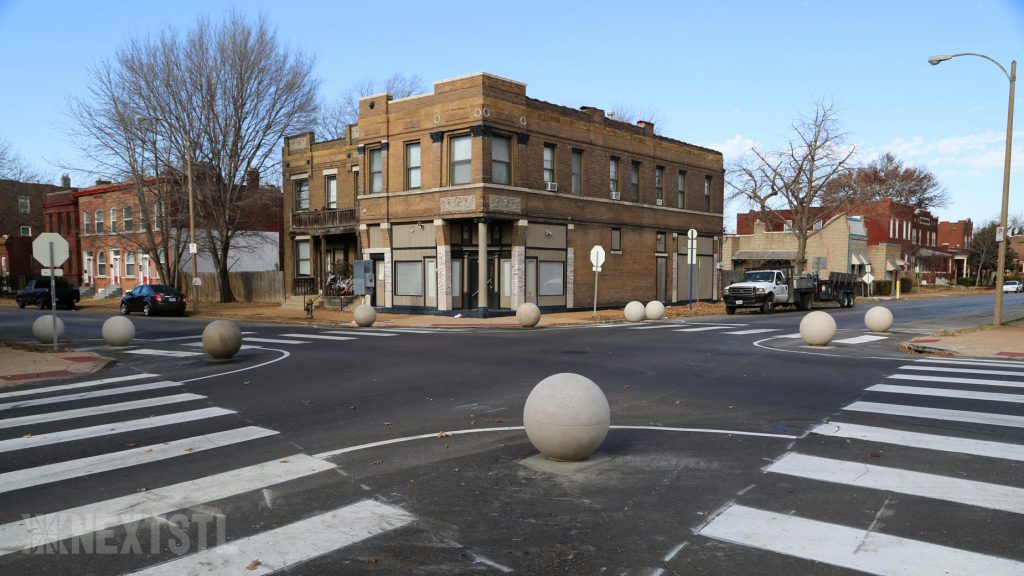 New traffic calming infrastructure arrived in Tower Grove East ahead of Christmas, but for many residents the sets of spherical concrete bollards at intersections are proverbial lumps of coal. The bollards – nicknamed for the last mayor as “Slay balls” – have been in use for over a decade in the city to close off or narrow streets, but their aggressive placement in the road lanes at six intersections along Compton Avenue has upset many motorists.

First, we have to take the locals with a grain of salt. St. Louisans love to grumble about change, like most people. The Tower Grove East Slay ball uproar comes amid gripes about the Loop Trolley, which deserves critique but is about the same kind of circulator that Kansas City just opened – and celebrated (and built at twice our price). Naysaying also has sunk many good ideas, such as removing Interstate 70 from downtown to better connect the riverfront. Online hit-and-run platforms elevate grievance to a form of political protest, when it usually is a psychic reaction.

Second, there is the issue of scale. The Compton Avenue project represents the result of allowing infrastructure decisions to be consigned to a libertarian municipalism, where the services and infrastructure are determined at a ward or neighborhood level. Some areas close streets, some don’t have alley recycling, some have better parks. This fragmentation treats the city as a set of unitary groupings rather than a whole system.

In the 6th ward, where the bollards are now in place, Alderwoman Christine Ingrassia uses participatory budgeting as a form of popular input to determine how to spend money that City Hall still allows to be directed on the granular level of the ward. Ingrassia started a process in 2015 where a majority of residents who participated elected to place Slay balls up and down the street. Less ugly options, such as building out new curbs, exceeded available funds. So the residents were stuck with a Hobson’s choice, because of the city’s lack of systematic street planning.

Of course, the city street system is nor the product of planning. The street pattern, with its quirks and deviations, comes from a system that was fully privatized until 1867 – developers laid out streets and then donated them to the city for maintenance. After 1867, the city shared the cost, but still allowed developers to determine where streets would be laid, and how wide they would be. Sometimes, paths across the city were congruent, and other times they were pretty inscrutable. Compton Avenue happens to be one of the most rational lines, and a key route across south city.

Compton Avenue also would have less stress were there more north-south routes into the central corridor, but the city never developed many. Thence motorists place moderately heavy traffic on what routes are available. Again, the lack of central planning means that many people bought houses on Compton hoping for a peaceful residential setting, but the systematic nature of city streets means that they have no control over who drives down their street and in what vehicle (perhaps something that could be addressed by ordinance, insofar as commercial trucks are concerned). The city’s demolition of Spring Avenue west of Grand Avenue in the 1990s led to Compton being the only south alleviator for Grand Avenue. The Shaw neighborhood’s closures cut off Tower Grove Avenue as an option for drivers too, and happened because the city let the neighborhood decide to close the streets in the 1980s.

Closures are behavioral obstacles, but Slay balls are just behavioral switches, trying to control driver behavior. They may work after awhile, but without real consideration of the street system that produced traffic density south of the central corridor along Grand Avenue, people don’t exactly have options if Grand Avenue is congested.

Eventually, the United States discarded the weak system of the Articles of Confederation for a robust federal Constitution (an imperfect document, used here for analogy only). Holding one’s breath for St. Louis adopting a charter that would discard our feudal charter is a waste of time, and for now, we’ll get Slay balls on Compton, closed streets in Shaw, speed bumps in Gravois Park and stroads all along the way.

But perhaps we can turn lemons into lemonade, and neither complain about the balls or the system that produces them. Do Slay balls have to be boring? What about holding the nation’s first concrete bollard art biennial, inviting artists from all over the world to decorate them? Or making some in different shapes, even in honor of local historic and political figures? Parkour competitions or secret compartments inside with maps to neighborhood historic sites? LED projections of video art? There could be a contest for the coolest recycling project for the balls, when someday a more systemic solution is found, and the city’s streets are devoid of the bollards, culvert pipes, and fences that currently make them seem like a militarized zone. We don’t have to despair in the meantime – we can just dance on the contradictions until they start to budge.