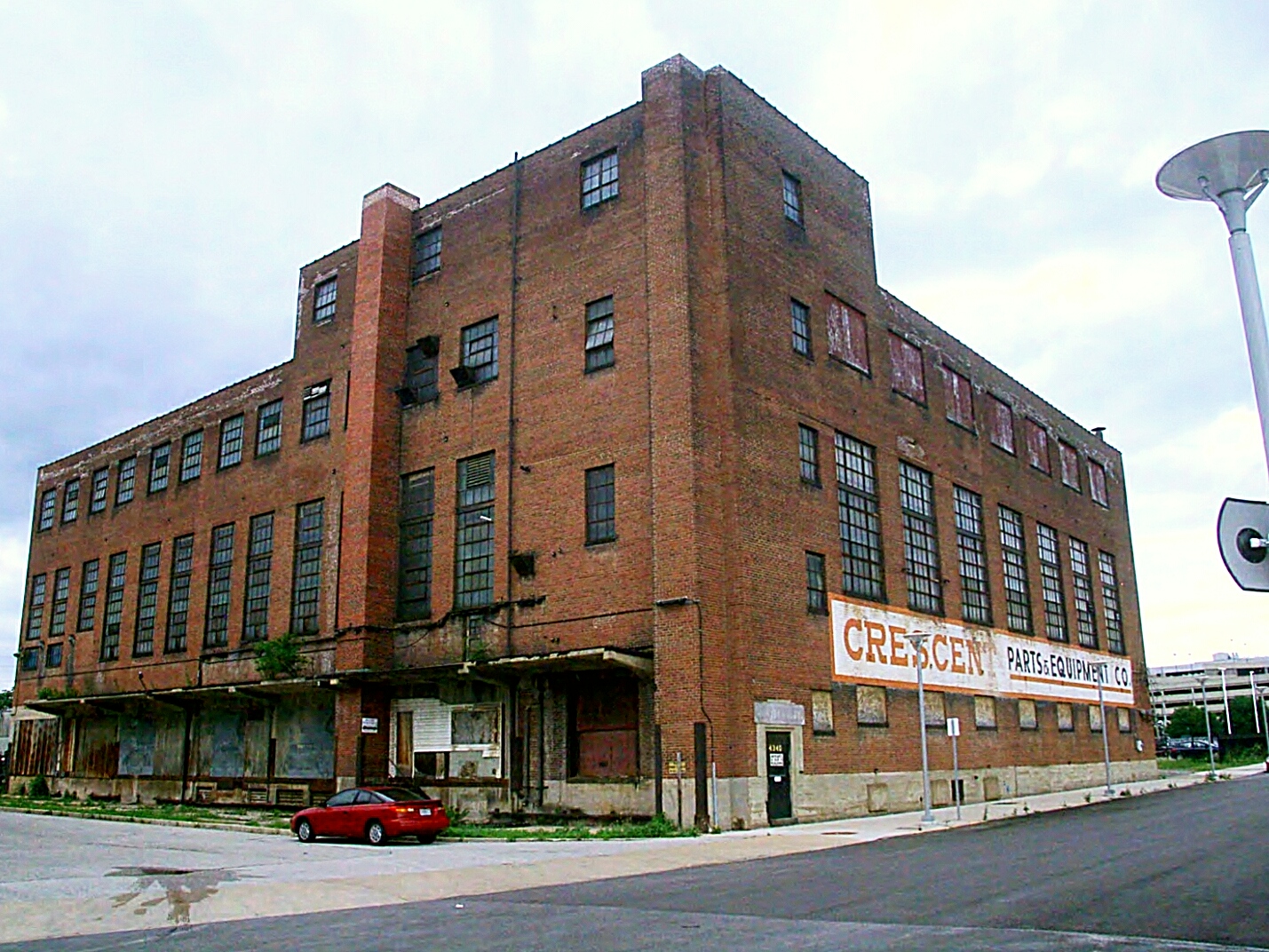 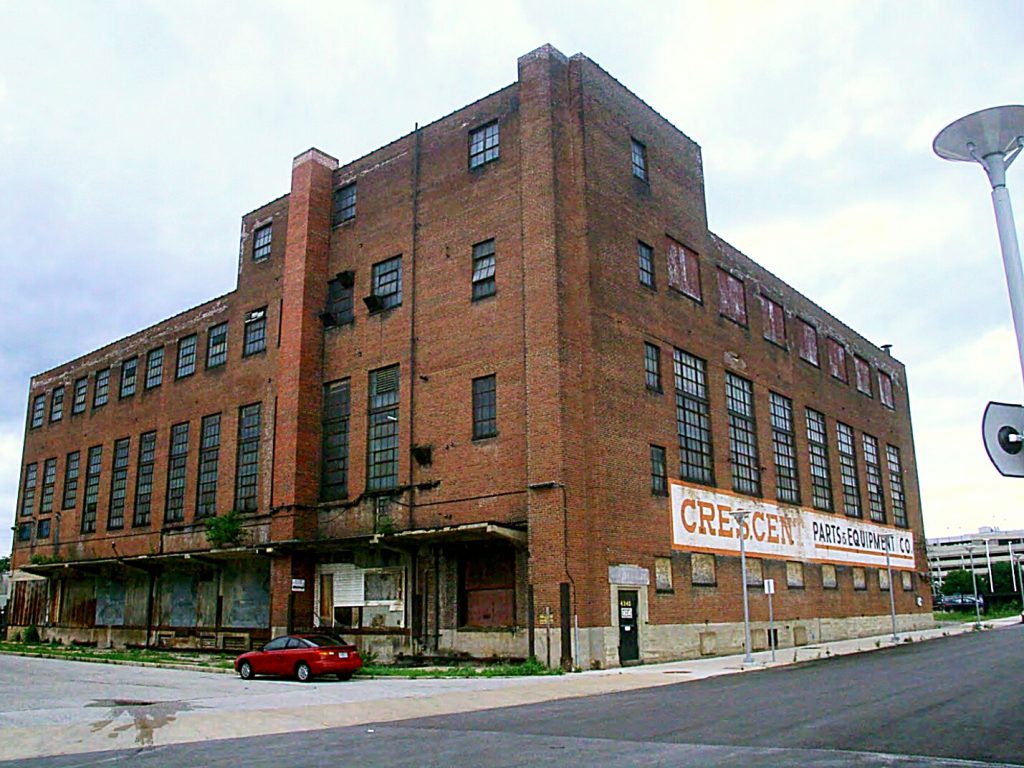 The Cortex Innovation Community plans a $44 million multi-tenant renovation of the historic printing plant most recently known as the Crescent Building at 4340-50 Duncan Avenue. With a recommendation from the St. Louis Development Corporation, the City’s Tax Increment Financing Commission is expected to approve a $5 million TIF for the project at its meeting today. 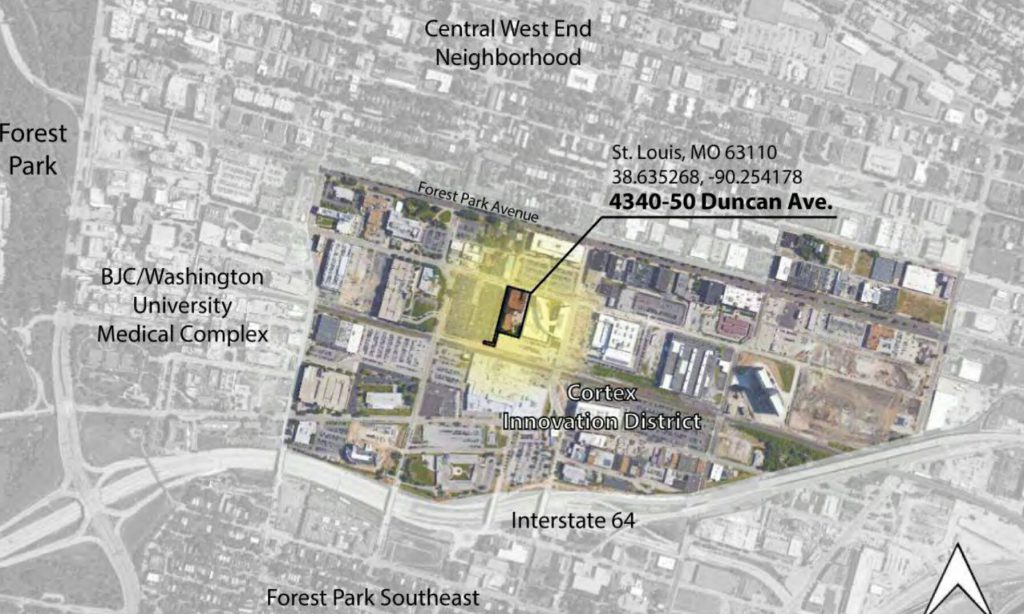 Plans call for 96,000 square feet of affordable laboratory, shared lab, and creative office space. Users will include the district’s graduating incubator and accelerator tenants. The vacant concrete and brick structure is adjacent to the modern DuPont building on the block west of Cortex Commons. 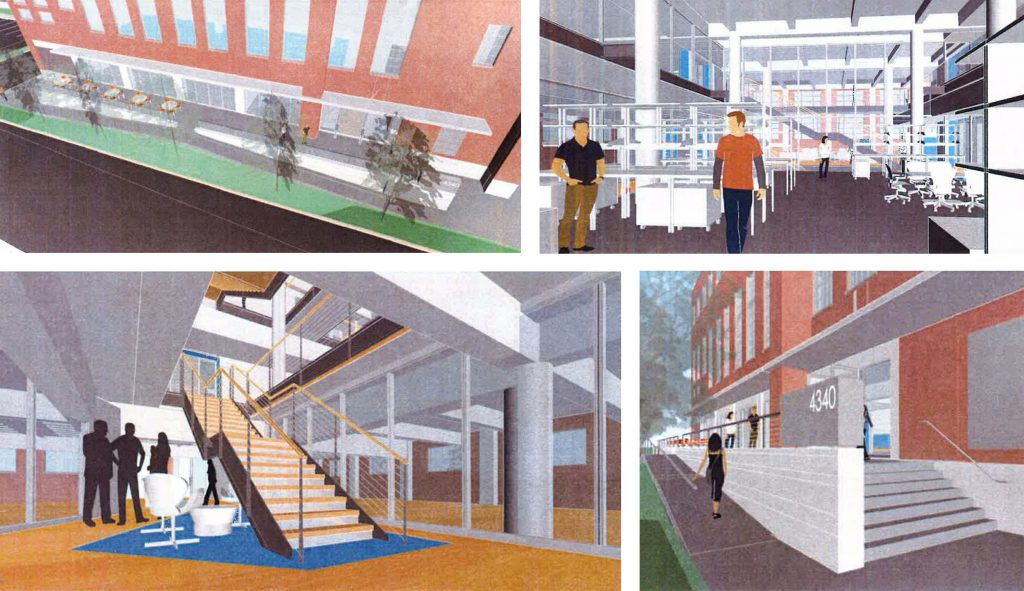 The three-story St. Louis Post-Dispatch Rotogravure printing plant was built in 1930 for $300,000. A four-story lift tower rises at the northeast corner of the building. Double height windows bring light into the vast second floor. Clay tile trims the edge of the roof.

The firm of Mauran, Russell & Crowell was the architect. In 1914, that firm had designed the Railway Exchange Building downtown — best known as the flagship of the May Company’s Famous-Barr, later Macy’s. John Lawrence Mauran went on to serve two terms as president of the American Institute of Architects. But the late 1920s and early 1930s was the firm’s most significant period. The firm designed the Federal Reserve Bank building in 1923, Union Market in 1924, the Police Headquarters in 1927, the St. Louis Globe-Democrat building in 1931 and the Federal Courts building downtown in 1932. Mauran died unexpectedly in 1933. 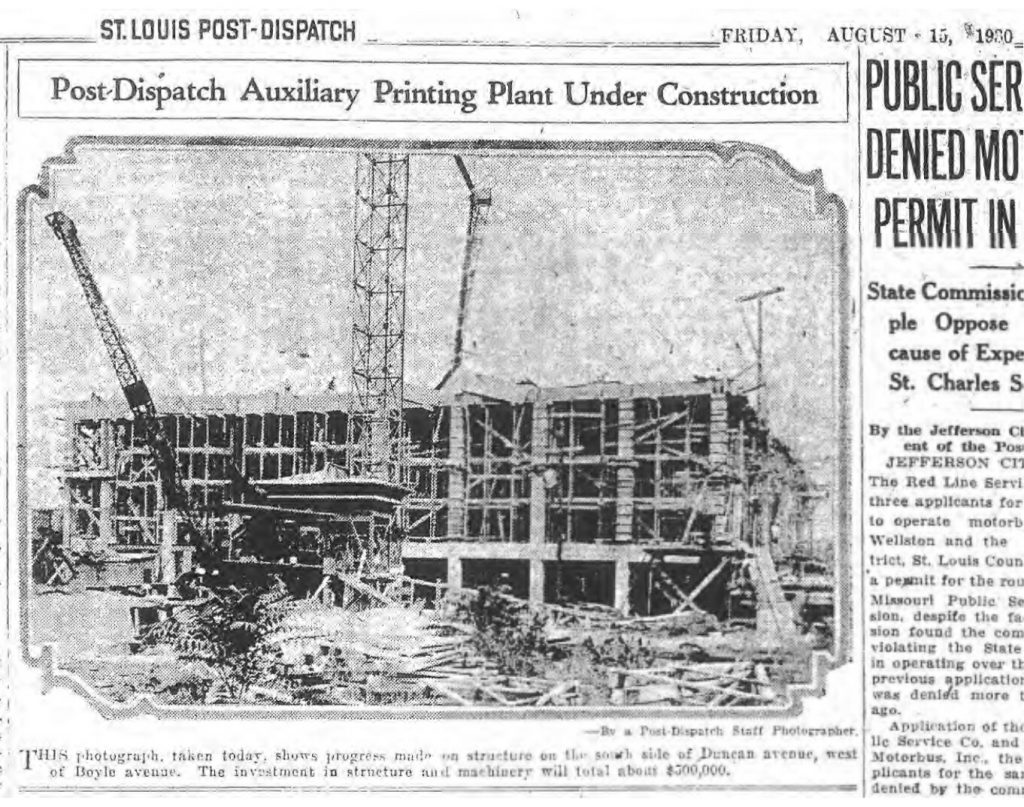 With $200,000 in printing machinery installed in 1930, the Duncan Avenue printing plant put the Pulitzer family and St. Louis at the forefront of an increasingly visual media industry. Rotogravure was a revolutionary intaglio printing process that used a rotary printing press to produce high-quality reproductions of photographs and illustrations. As late as the 1950s, the Post-Dispatch was one of only seven newspapers nationally that owned its own rotogravure press. This put the paper at the cutting edge of printing technology with its high-quality visuals that improved reporting as well as revenue from advertisements, increasing both the paper’s prestige and its profitability.

On May 22, 1938, the Post-Dispatch premiered a full color, full-size broadsheet section titled PICTURES. According to the National Register listing, Post-Dispatch PICTURES was the largest rotogravure image section in the country and was compared favorably to Life, Look and the New York Times Magazine. The cover of one January 1965 printing shows a sea of parked cars as a streetcar passes by. At bottom, the title reads “Too Many Autos, A City Problem.” 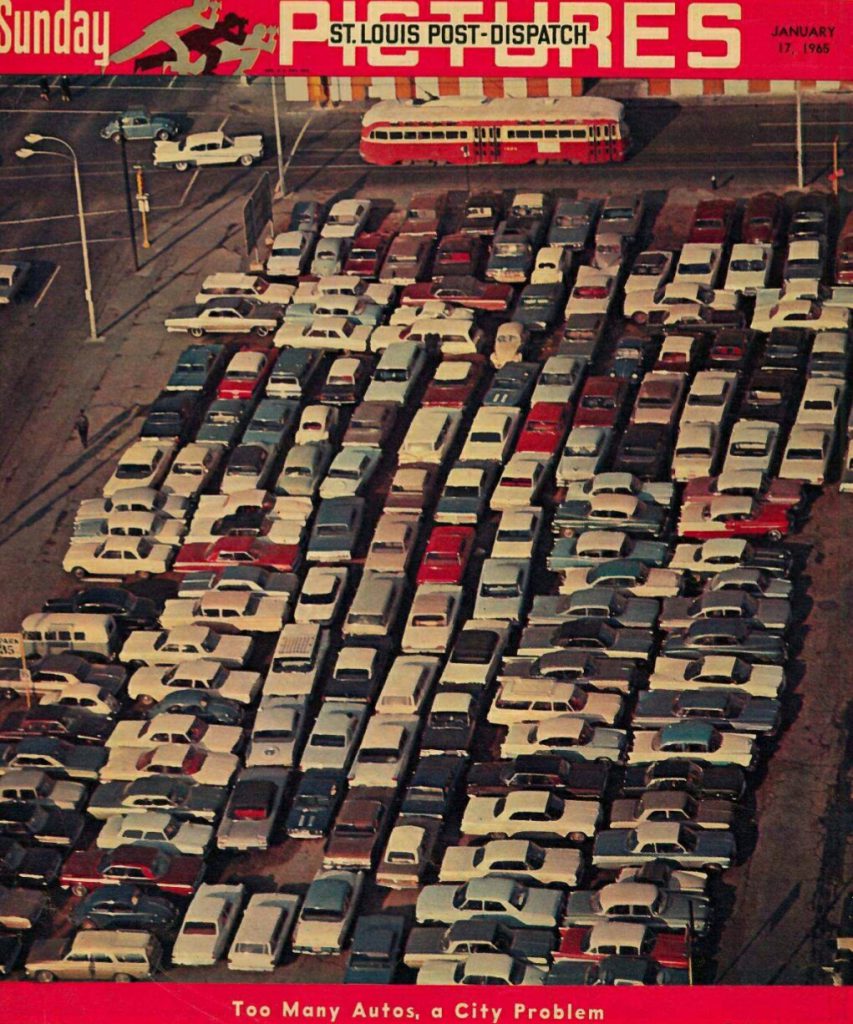 The Post-Dispatch added a one-story steel frame addition to the building in 1949 and an additional brick addition in 1956. The newspaper continued using the building until 1973. For the next two decades, Crescent Parts and Equipment Company occupied the building. 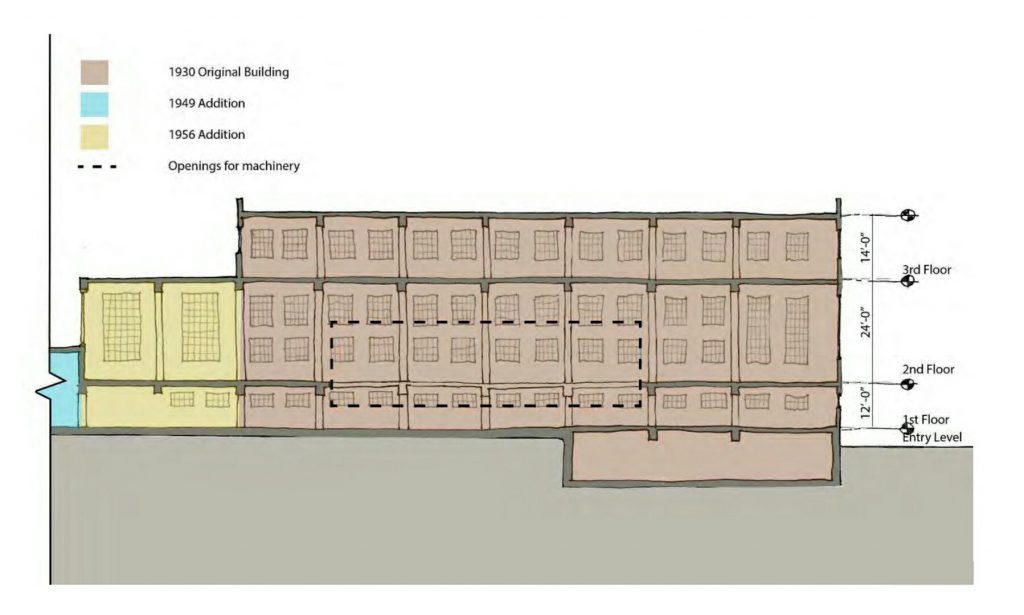 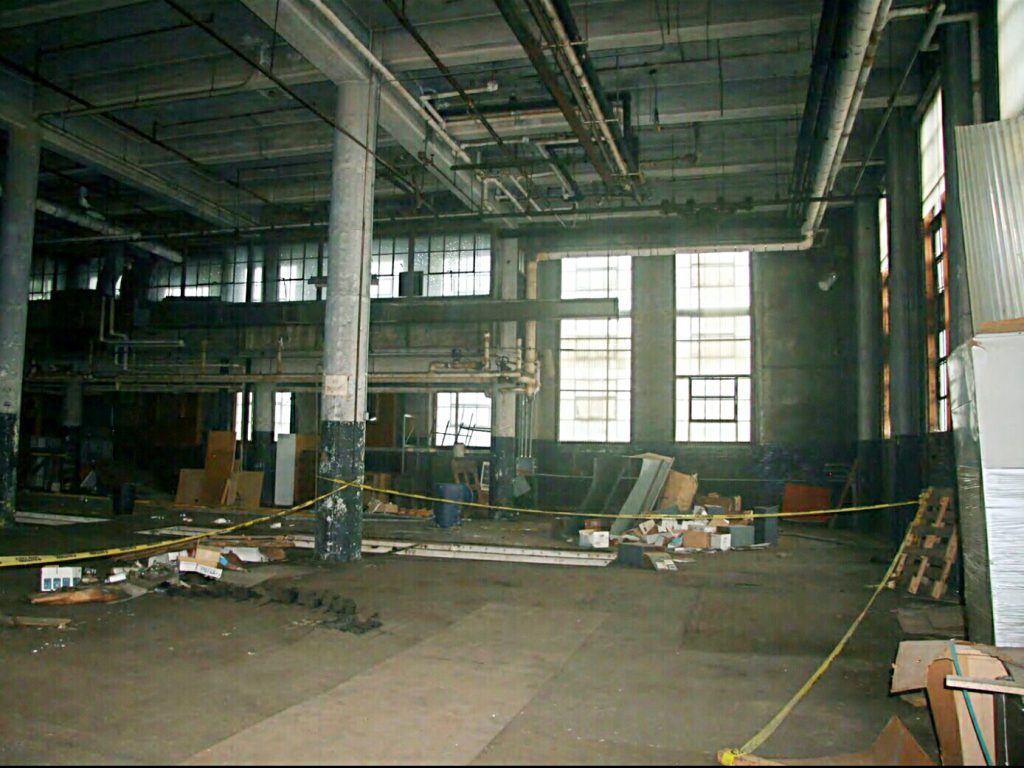 The structure has been vacant since 2006. It was listed last on the National Register of Historic Places in 2016. The redevelopment project is expected to generate 230 construction jobs and 270 permanent jobs — 81 jobs relocating from elsewhere and 189 new jobs. Completion is expected in Spring 2019.