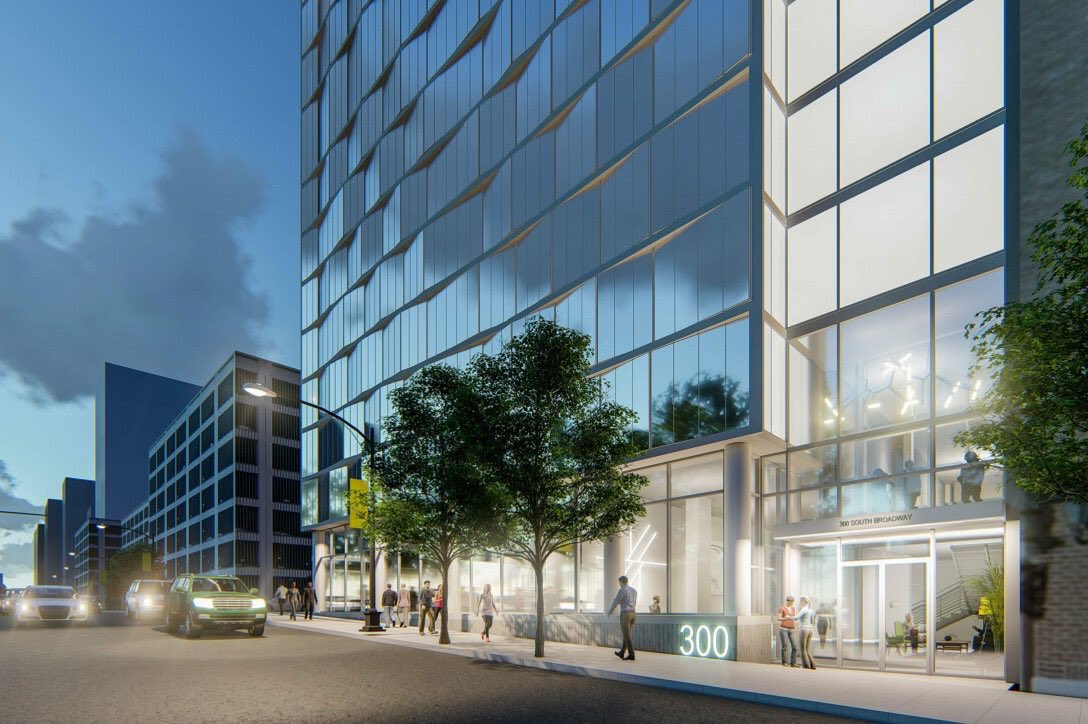 On Monday, the Preservation Board will consider granting preliminary approval of demolishing a historic building owned by the St. Louis Community College at 300 S. Broadway in favor of a new high-rise apartment tower. There’s much that is opaque about the affair, and hopefully the meeting will witness the developer presenting more detail. For now, the Cultural Resources Office (CRO) staff has prepared a recommendation for conditional approval that offers a starting place for adjudication.

CRO admits that the Isaac Taylor-designed building is High Merit, but recommends approval so long as conditions – including an actual construction permit – are met. This is a reasonable calculation, using the city’s preservation ordinance to compel a careful substitution that increases density and prevents another downtown crater (smaller than the Bottle District or Ballpark Village crater, on par with the Cupples 7 crater). The last time the Board favored a new residential building over protected historic buildings, instead of a SkyHouse at 14th and Washington the city got an asphalt parking lot. 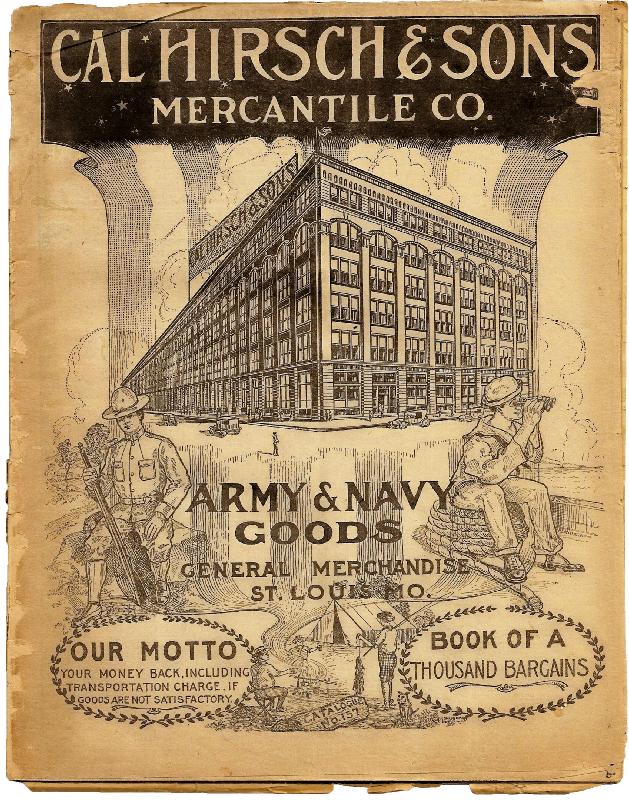 Preliminary approval Monday will remove the chance for any future public meeting on the proposed design, so the stake is high. The Board can use the opportunity to make a reasonable idea–a new tall building downtown–into great urban design.

The Preservation Board has no legal authority over new urbanism unless a historic resource must come down to make way. Unfortunately the city has no design review outside of a mechanism poorly equipped to guide the future – a commission with “preservation” in its name. The Downtown St. Louis Partnership stymied a well-developed form-based code for downtown, and there is no architectural design code for the central business district.

So the Preservation Board is the only tool for making sure new downtown buildings are of quality, when the law allows it to weigh in. We have to lean on the tool we have, even if we end up eating soup with a fork.

Here are my questions for the cooks – points that I hope the Preservation Board will consider:

Where is a site plan for the building? The Preservation Board agenda does not include one. The current building maintains a historic street wall and hits the sidewalk line head on. Its base, however, is not transparent or inviting. A building that embraces the sidewalk could be an improvement. With Ballpark Village rising across the street, outside of Preservation Board purview, this building can establish a string corner that draws the urban density of north downtown southward across the revived Kiener Plaza (of course, a certain parking garage needs reconstruction or annihilation to make a walk down Broadway truly pleasant). 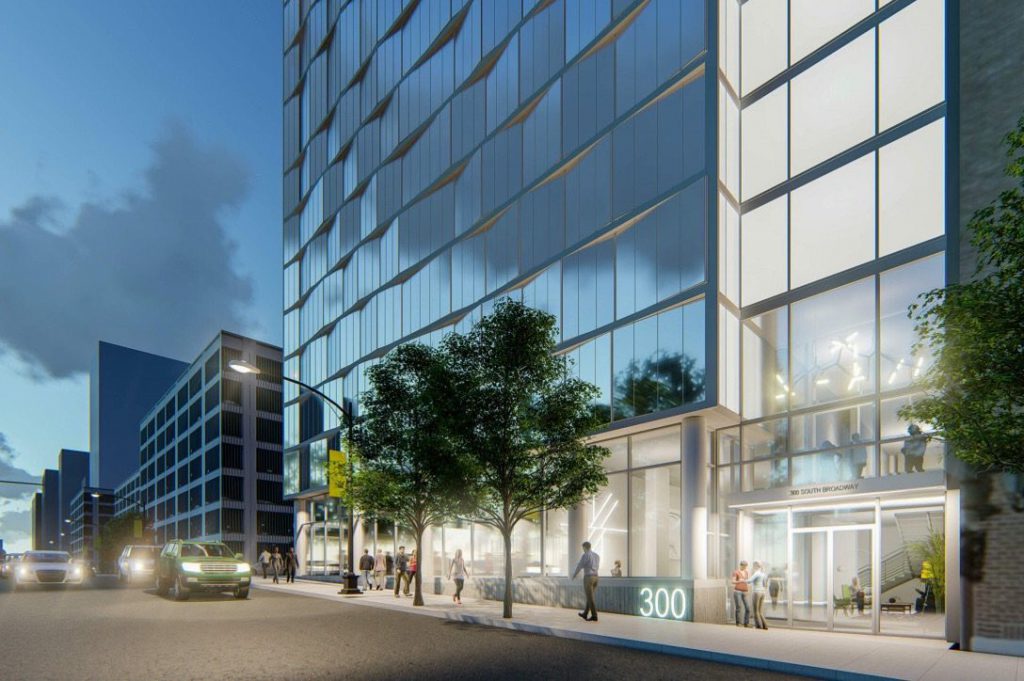 What is the base going to look like?  Downtown is full of unitary buildings whose renderings portended connection to the city, but whose execution discourages interactions through walls, benches, setbacks and other tools that weaken pedestrian experience. The drawings suggest transparency, but design is as much relationship as form – how close a glass wall is to the person on the other side, not just a glass wall.

What are the building materials? Can the developer provide samples? On a drawing, everything shaded gray looks like beautiful stone or concrete. Everything shaded blue suggests mirrored glass. In reality, materials are not chosen to match renderings. Builders buy materials from suppliers who have limited options cross-checked against budgets. The parking garage that the Treasurer’s Office built at Clark and Tucker shows the farce of rendering, which can promise a rose garden when the final plan is to build a weed patch.

How much affordable housing will be included in this building? This question is somewhat outside of the Preservation Board legal constituency, but the “cultural” in Cultural Resources Office encourages a preservation of more than just bricks and mortar. Part of the heritage that infuses of built environment are the customs of the residents who have made St. Louis into a metropolitan urban place. Many of the current residents of St. Louis are poor or working class. These people traditionally have been a strong presence in downtown St. Louis. Can this project extend the presence while bringing in new residents? (This question, I hope, is asked by Alderman Jack Coatar before he sponsors any legislation granting public investment in the project.)

If the Preservation Board needs more information, can the developer return in January with more details? Clearly the developer would prefer a clean preliminary approval, even with conditions, to assist in financing. Yet just as the lenders set terms that a borrower must meet, so can (and should) the Preservation Board that represents the people of the city who don’t get to vote Monday. They are representatives, not simply mayoral appointees.

Of course, the whole deal shows that the market rules urban design. The tower developers are making a deal that requires demolition because of a desired location and an available deal. They aren’t buying the Stadium East garage or the giant parking crater to the south, and the Preservation Board cannot compel that. Neither can preservation activists, but that doesn’t mean that there are not good reasons to oppose demolition of the building based on its worth. This essay is addressing how the Preservation Board can use its limited powers more effectively should it choose to accept demolition. The Board remains free to deny the proposal outright.