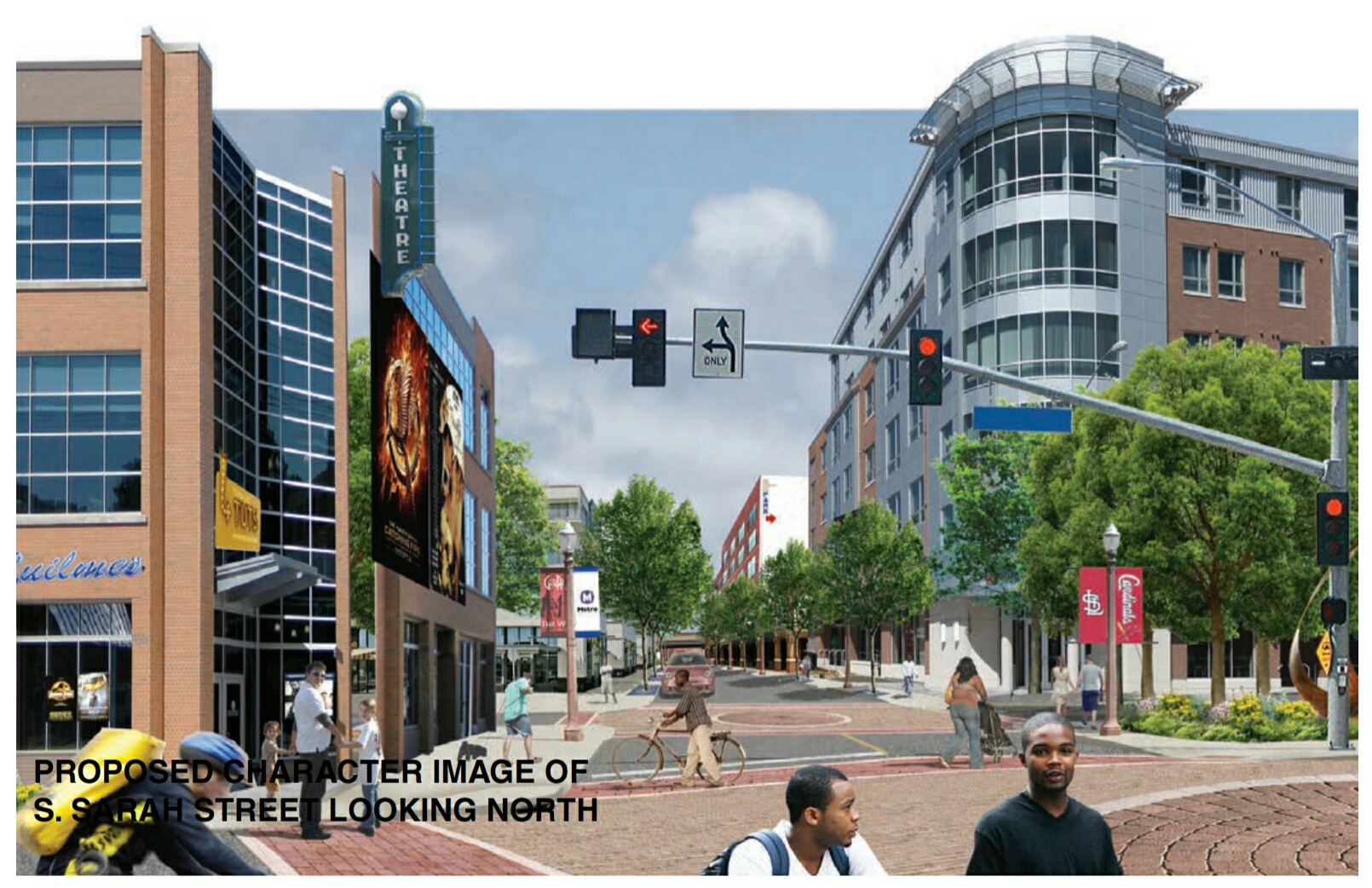 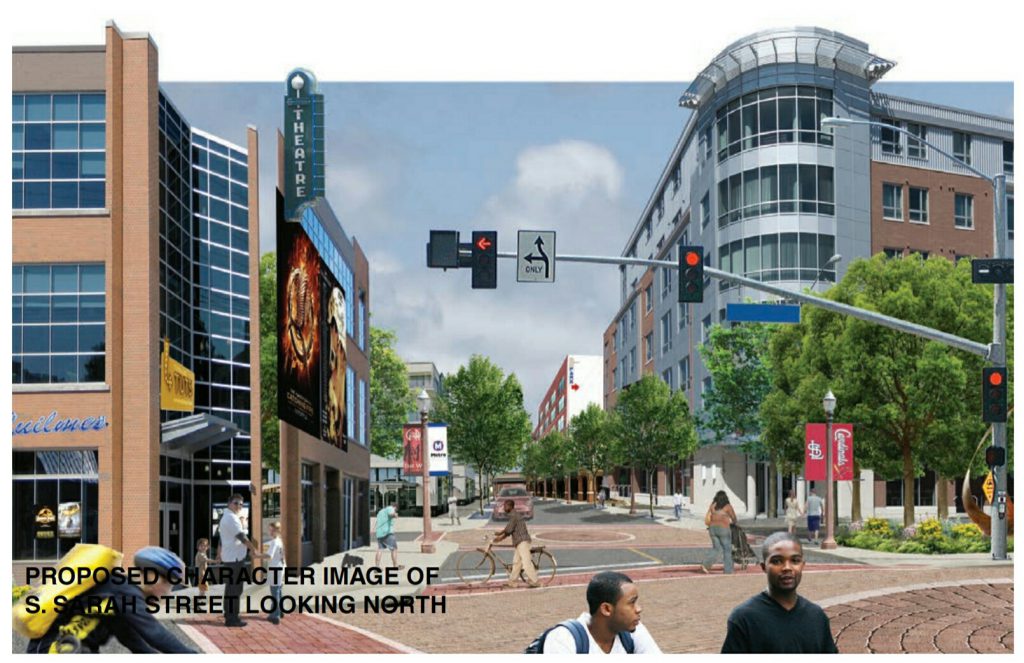 This Wednesday the St. Louis Planning Commission is expected to approve form-based code for Forest Park Southeast (FPSE), the neighborhood that encompasses The Grove entertainment district and the residential blocks between Highway 40 (I-64) on the north and the Union Pacific railroad tracks to the south. If approved, the Forest Park Southeast Form-Based District will go to the Board of Alderman to become law.

This is a huge step forward for St. Louis.

Form based code conceives of neighborhoods as a whole and regulates the built environment by using physical form (not just separation of uses) as the organizing principle for the code. This gives the public a voice in what is built as well as what it looks like. Traditional planning since the 1940s has focused on what use is permitted — separating retail from residences or industrial uses. Form-based code defines what the street itself should be — and thus limits developers to projects that support that urban vision. Under the bill, small exceptions could be granted by city staff, but larger changes would require an appeal process unlikely to allow building forms not in the neighborhood’s interest.

Among other powers, form-based code can stipulate a development’s physical features, it’s setback from the street, the height and size of a structure (it’s envelope), and whether it must contain first floor retail. This means that the public can prevent a private owner from building a suburban style house on a block of urban rowhouses or a suburban style gas station and surface parking lot along a dense urban boulevard. With form-based code, the public can stipulate that a certain location should contain shops fronting the sidewalk or that a building must be between three and seven stories. It is a progressive vision. It assumes that citizens have a collective say in how a private building’s facade relates to our commonly owned public spaces.

Planning for the FPSE neighborhood has sought to strengthen the Kingshighway and Vandeventer edges of the neighborhood, transforming them into walkable urban streets. According to Planning Commission documents, the plan seeks to “reinforce the well-established, historic and walkable character of the residential cores of the neighborhood with incremental infill and development,” while maintaining Manchester Avenue as the neighborhood’s Main Street and primary community gathering space. 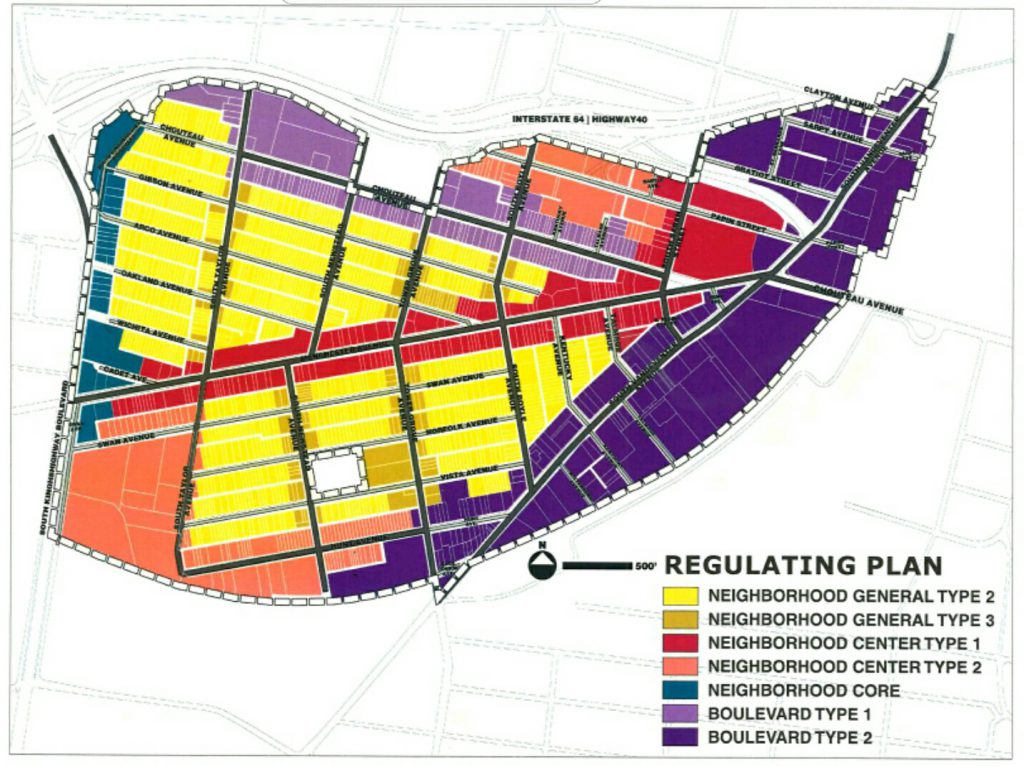 The FPSE code identifies seven different types of neighborhood forms for the 350 acre district. The code identifies specific design requirements and building types for each of these seven. To the north, Chouteau will function as a grand boulevard and residential edge of the neighborhood. Tower Grove will develop its mixed use character south of Manchester as a connection to Tower Grove Park and the Missouri Bontanical Garden.

Park Central Development and 17th Ward Alderman Joe Roddy began the years long neighborhood planning process in 2014. H3 Sudio worked with neighborhood residents and stakeholders to develop a vision for what the neighborhood should look like in 2025. A neighborhood plan was adopted in 2015. The FPSE Form-Based District codifies steps toward that vision. Images are from the 2015 neighborhood plan developed with H3 Studio.

St. Louis will only benefit from progressive urban planning. Along with city-wide preservation review, municipal consolidation, TIF reform, tax abatement focused on poorer city neighborhoods, transit-oriented development, community benefit agreements and mandatory set-asides for low-income and universal design units in large residential projects, form-based code is another powerful public tool in shaping the St. Louis that ought to be. Form-based code can help foster a predictably high quality built environment, an environment built for people and in the public’s shared interest. My hope is that other city aldermen and alderwomen will lead the kind of lengthy community planning process to set the vision for their neighborhoods and gain the planning tools to help make that vision a reality. The Central West End and now Forest Park Southeast have shown the way.