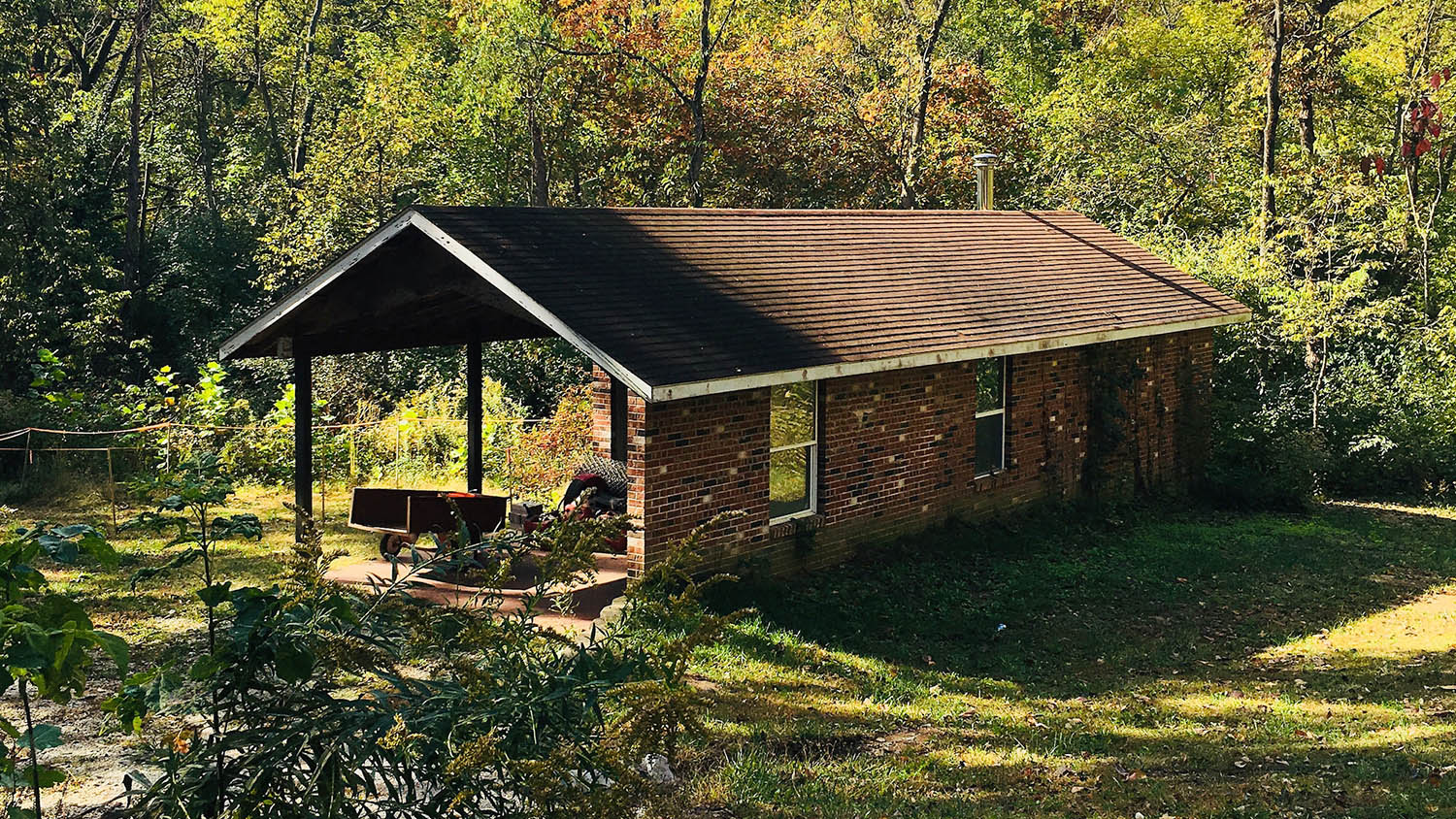 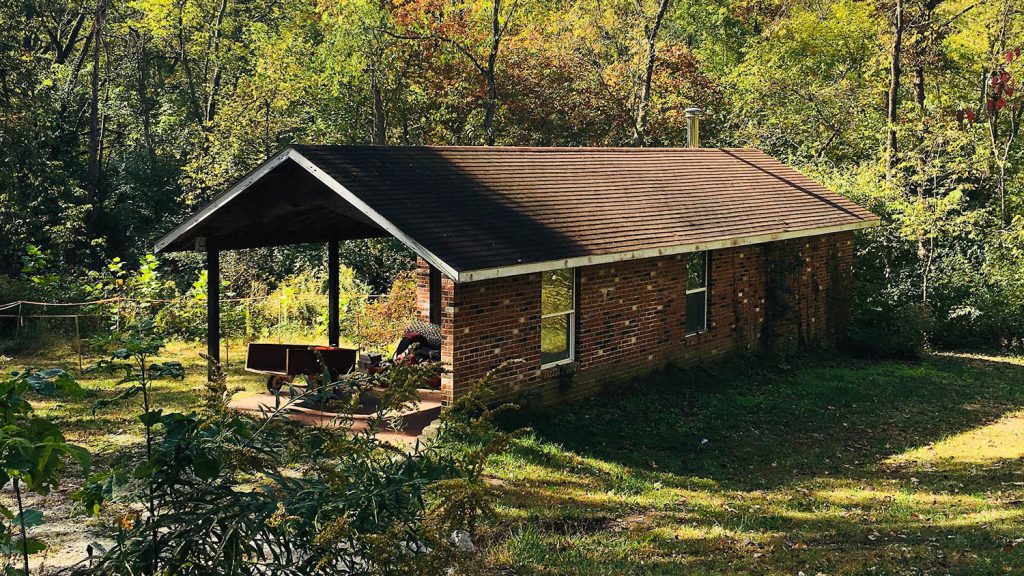 Jessi Cerutti heads up the board of Paul Artspace, which runs a residency program for artists inside a large ranch house, which itself sits on a wooded, tranquil, 5.6-acre piece of unincorporated North County. She’s at the site quite a bit, yet she’s still struck by the vibe that’s created there.

On a recent, unseasonably warm afternoon, she spoke from within the covered carport of the space, where a table and chairs provide something of an outdoor office. Inside the facility, a pair of residents were at work on projects. Outside, a gust of wind was creating a moment of loveliness, as a stand of nearby trees grudgingly gave up their still-green leaves.

She says that she routinely gets that feeling of specialness, “as soon as I pull into the driveway. I imagine what this would be like as my residence, with how much of a sanctuary it can feel like here.”

For a lot of years, the building was, in fact, a residence, owned by the Behle family. The building’s namesake, Paul Behle, was the uncle of St. Louis artist/UM St. Louis arts professor Mike Behle, who shepherded the transition of the space into an artist residency community after his uncle’s passing. The organization’s mission “offers living and studio space for local, national, and international artists, writers, and curators. Through providing time and space, Paul Artspace promotes thoughtful discourse and artistic exchanges within the greater cultural community.”

The three-bedroom home was built in 1970 by Bud Niehaus, whose family left a significant footprint as homebuilders and business owners within the nearby, wooded neighborhood. The space, as constructed, allowed Behle an opportunity to create a venue modeled after some other, successful programs around the country. After several years of offering that programming through a low-cost fees system, the Artspace went fee-free, which has caused some degree of extra pressure when it comes to fundraising.

Though traditional arts-granting agencies have helped somewhat, Paul Artspace has found untraditional ways to make some dollars. This past summer, for example, the board created Paul’s Pickles, which were sold at farmer’s markets in-town, with the best sales coming at the Tower Grove Farmer’s Market.

“That was huge this summer,” Cerutti says. “It turned out to be such a great fundraiser, which we didn’t expect it to be.”

In addition to helping keep the lights on, the pickles were a big outreach tool, with folks buying the $5 jars for the first time inevitably drawn into a conversation about the arts programming and mission.

“You can put a flyer in people’s hands” more easily that way, Cerutti figures. “It’s a nice way to give your 30-second spiel. Little connections like that are key, just letting people know that we exist. That’s really the only way we can start to secure bigger funding, getting people to support us outside of the traditional arts patrons. We bring creative exchanges here that are valuable.”

The next phase of growth for Paul Artspace will likely require a bigger investment than the pickles can offer alone. In addition to the main ranch house, the space has a few secondary, smaller structures; one’s small and suffers from a failing roof, but another’s large enough that the board envisions it being turned into a potential, year-round home for an onsite resident/program facilitator. They’d be on-hand for day-to-day tasks around the facility, done exchange for a rent-free home and studio.

The board’s also pursued the option of an entirely new building, going up from scratch, for that same purpose and at least one prominent St. Louis homebuilder’s shown some interest in taking on that project. That’s not a certainty, though, so the board’s looking at any manner of possibilities to create a space for that year-round resident.

At least pondered, but not seriously pursued, was the idea of moving the program to South City, where several board members live and where there’s more of a nexus of complementing arts activities. But while that conversation was kicked around, already having a building with a slow-growing history of activities and artwork suggested that things stay right where they are, along a winding, hilly stretch of Sinks Road.

“There’s so much potential out here, almost six-acres,” Cerutti says. “To grow on the property would be nice, without a doubt. Seriously, the pickle fundraiser got us through the summer and it doesn’t take a lot to run this place. But we had to ask ‘how sustainable is this? Do we move this into the city and procure a space that’s not as remote?’ But this is our brand. This is what we offer. Without this house there is no Paul Artspace, it’s so innately tied.

“It’s gorgeous here,” she adds, noting the growing collection of art that’s being created (and left) at the space. “We have a unique opportunity to have a sculpture garden. The artists who stay can leave a mark here and we’re fortunate to have that stuff.”

While the program’s several-year run has won over nearby neighbors who worried about what the space might bring in terms of traffic and noise, the board still prefers to keep events small and low-key. There’s one taking place this weekend, in fact, an opportunity for the public to come out and see what Paul Artspace is all about.

“Fall at Paul,” taking place on Saturday, November 4, is described thusly: “The trees are changing out at Paul and it is a lovely time to experience the property, see what our residents have been up to, and pick up one of the summer’s last jars of Paul’s Pickles. We will have local beer, hot soups, a cozy bonfire, and hayrides for the kids.” (Find the Facebook invite and directional info here.)

As Behle told stlmag.com, “I know it’s removed. It’s not so connected in that way to the St. Louis arts community. At the same time, a residency should give you a chance to pull back. For me, in graduate school, this seemed an interesting idea. That’s when I became aware of artist communities. Learning of the Vermont Studio Center solidified it for me. In a large way, that’s the model we’ve worked with, building it not just for visual artists, but for writers and curators, too.”

This weekend, you don’t have to hold any of those titles to get a taste of the Paul Artspace experience. You just have be curious and, ideally, possess a working GPS.