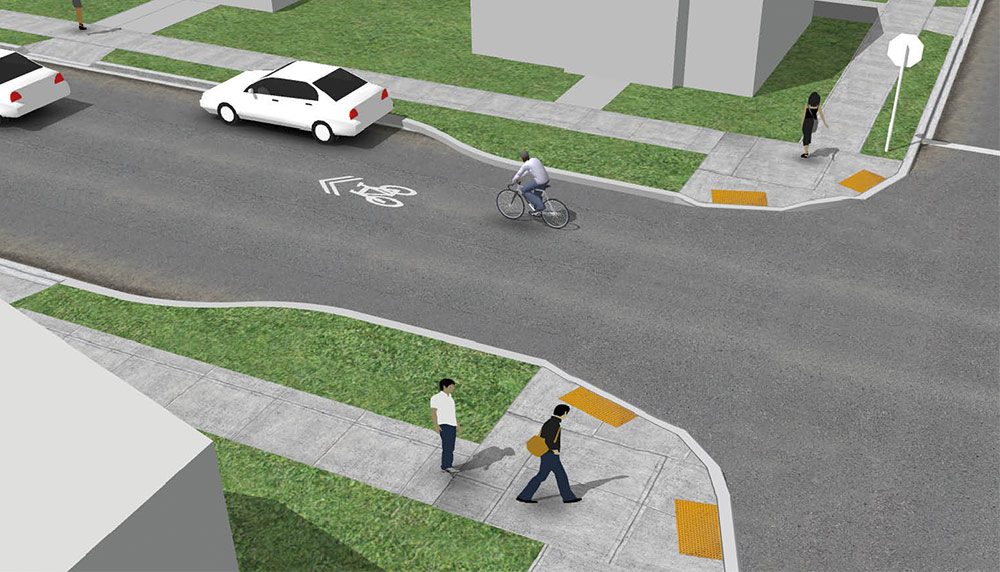 The East West Gateway Council of Governments (EWG) Board of Directors will voted this week to approve Transportation Alternative Program (TAP) grant funding to the St. Louis region which includes the top rated project, and only project within the city limits: nearly $1-million to design and construct St. Louis’ first Calm Street along Louisiana Avenue from Gravois to Meramec, connecting Benton Park West, Gravois Park, and Dutchtown.

Calm Streets are streets with low motorized traffic volumes and speed, that provide safe and accessible routes for walking and biking. These routes are important to the City of St. Louis as we continue to promote a robust multimodal transportation system that supports users of all abilities and ages. There are direct benefits associated with promoting walking and biking, and further developing the Calm Streets vision and network buildout ensures St. Louis can grow from these benefits, while supporting economically vibrant, safe and sustainable communities. 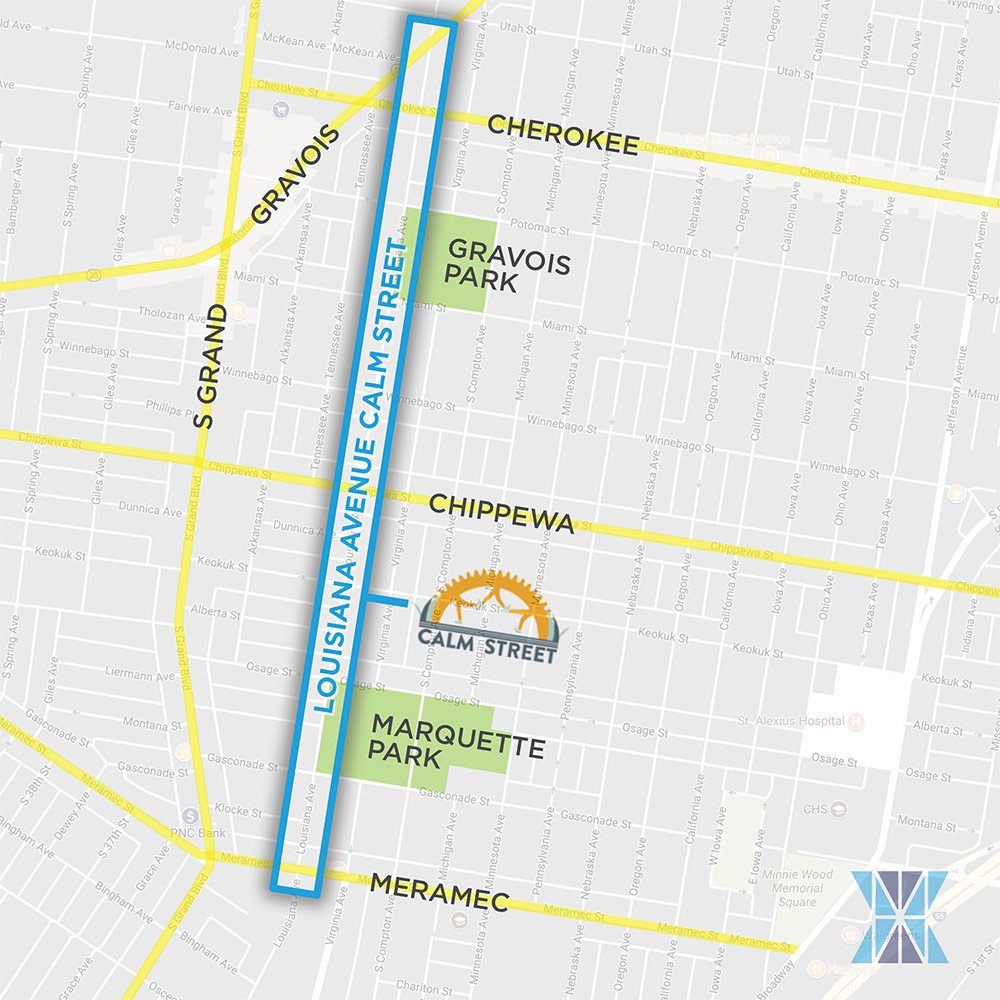 The Louisiana Calm Streets project implements a variety of traffic calming strategies. The conceptual plans call for speed humps, enhanced crosswalks, unique signage and branding, bumpouts, and neighborhood traffic circles at entrances to both Gravois and Marquette Park. Traffic calming features will incorporate sustainable design where feasible, and decorative plantings and enhanced signage where appropriate. In addition to slowing traffic and creating a comfortable environment that prioritizes pedestrians and bicyclists, the traffic calming features will provide a sustainable design that enhances the sense of place along the corridor.

The Calm Streets project started in 2014 with an Environmental Protection Agency (EPA) grant, obtained by Trailnet, to further develop the project vision and potential for implementation in St. Louis. Together, with the City of St. Louis, a working group of partners was formed to evaluate a Calm Streets network within the City, as well as identify possible locations for project implementation. Stakeholders identified areas where these facilities may be feasible, as well as routes for network buildout. Based on many factors including proximity to community goods and services, location relative to existing Bike St. Louis network, community buy-in, and neighborhood diversity, Louisiana Street was selected as the ideal candidate for the initial phase of design and implementation of Calm Streets for the City of St. Louis. 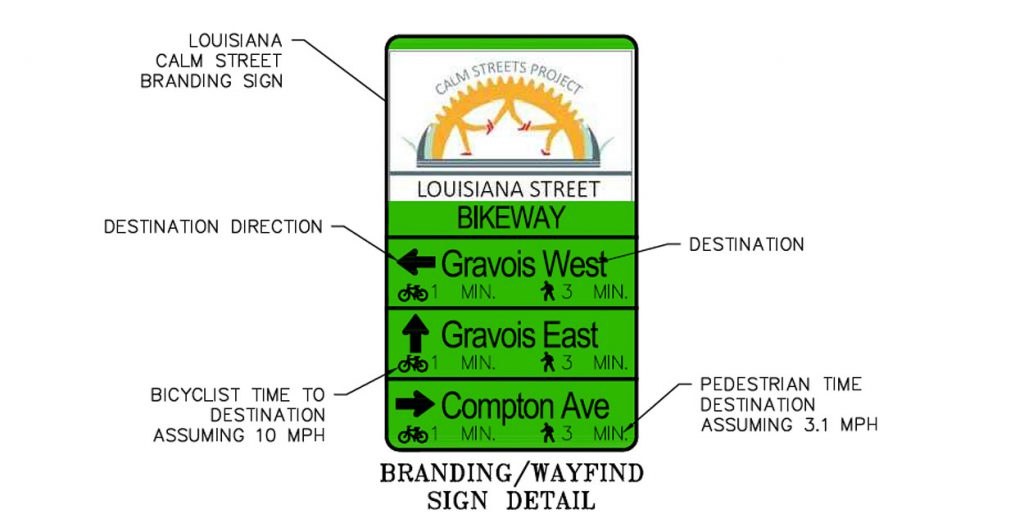 Louisiana Avenue is the first Calm Street project in the City of St. Louis, and can serve as a model for building safer streets for users of all ages and abilities. Using the framework from this project will help the entire region plan streets that prioritize pedestrians and bicyclists. With more ‘eyes on the street’, the Louisiana project has the opportunity to be a transformative corridor in these South St. Louis neighborhoods.

The Louisiana Calm Streets project intersects three neighborhoods: Benton Park West, Gravois Park, and Dutchtown, and will better connect residents to community goods and services, enhanced access to transit routes with connections to employment centers, and better connections to school and recreation. In addition to functionally providing a safer roadway due to slower speeds and traffic calming features, the enhanced sense of place because of the high-level facility will promote economic development and community revitalization in an area that is a priority for the City of St. Louis. 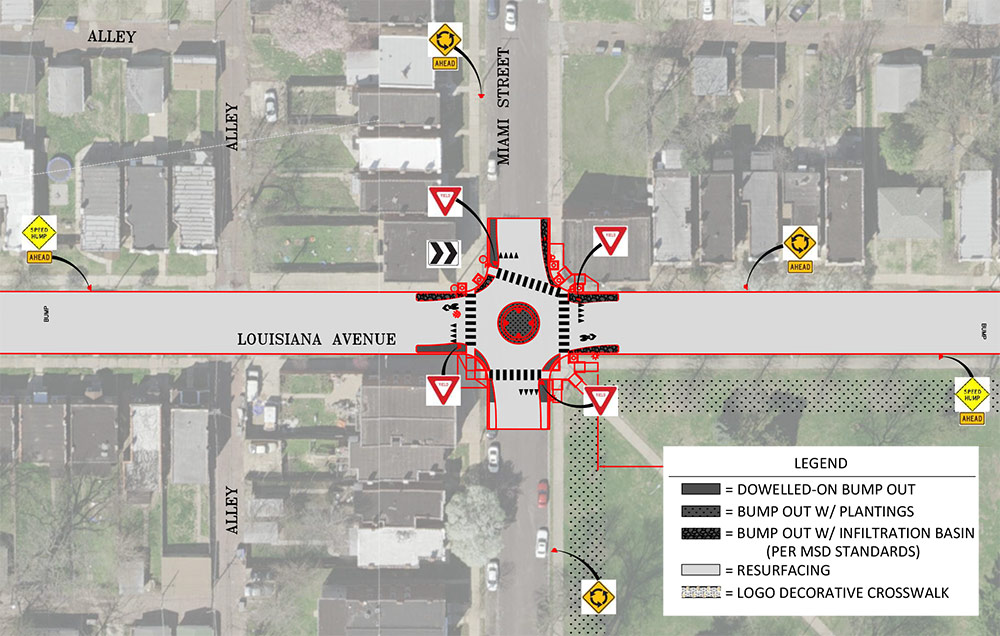 Gravois Park and Dutchtown are two of fifteen neighborhoods highlighted in the City’s PIER (prevention, intervention, education, retention) plan, that addresses priority areas outlined in the City’s ‘holistic approach to reducing crime…to build a safer, and more sustainable City for people to live, work and play.’ By promoting walking, biking and better access to community goods and services, more eyes on the street will help with increasing visibility within the neighborhood, and assist with impeding crime and violent activities.

The Louisiana Avenue Calm Streets project is a collaborative effort that will enhance the quality of life for citizens in priority areas, as well as help move forward similar projects within the region.

Jacqueline Lumsden is a transportation planner at CBB Transportation Engineers. Jacque graduated with a Master’s of Urban Planning degree from the University of Kansas (Lawrence, Kansas) and served as the President for the Kansas Association of Planning Students.