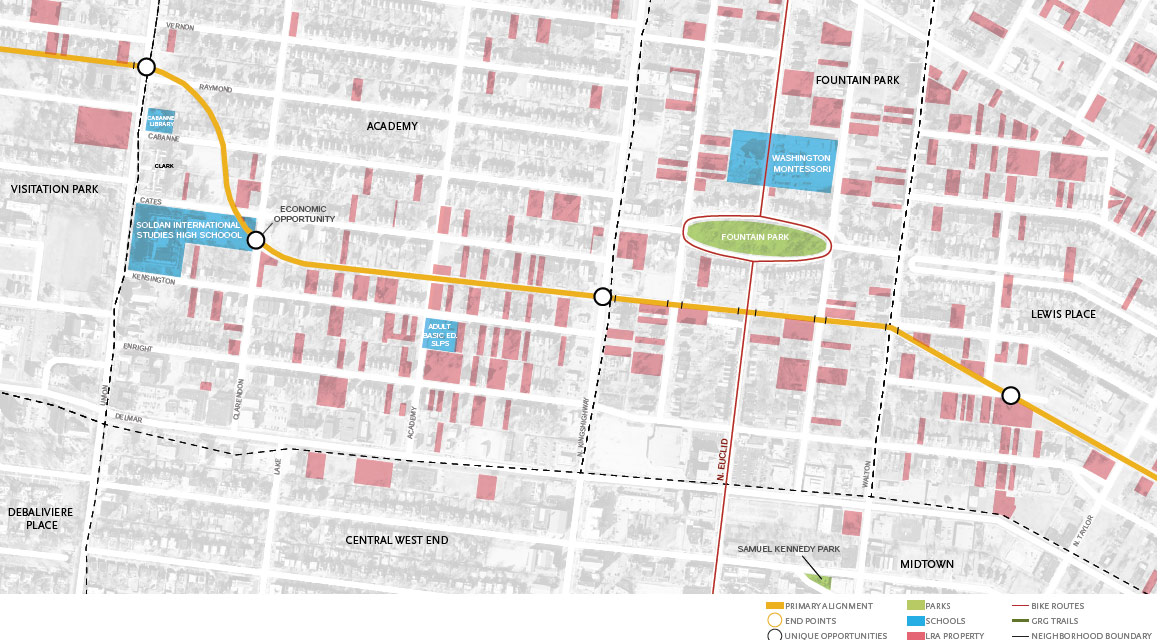 On April 25, 2017 Alderman Terry Kennedy (18th Ward) introduced a blighting study and redevelopment plan to the St. Louis Board of Alderman for the neighborhoods of Fountain Park and Lewis Place (boundaries being Taylor Ave to the east, Delmar Blvd to the south, Kingshighway Blvd to the west, and Page Ave to the north). 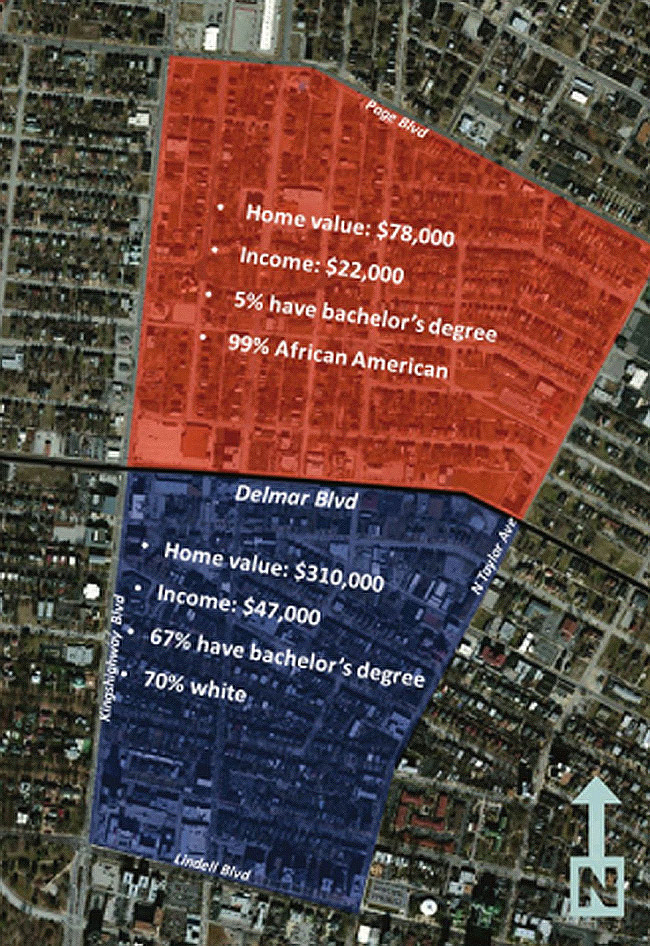 Further investigation has revealed that this blighting study is likely related to a little known redevelopment plan being dubbed “Kingsway”. According to their website (www.kingswaydevelopment.net), The Kingsway Development Corporation is a St. Louis based organization within the Kingsway Merchants District of the 18th Ward. KDC exists as a necessary community development intermediary, combining corporate, government, and philanthropic resources to help community-based organizations revitalize their neighborhoods.

The redevelopment area is bisected by the vacated Hodiamont Streetcar ROW that discontinued service in the area in the 1960s. In recent years Great Rivers Greenway has been proposed turning the old transit right-of-way into a trail for pedestrians and bicyclists. The proposed greenway would connect the disinvested neighborhoods of West St. Louis (predominately African American neighborhoods just north of Delmar Boulevard) to the rapidly developing neighborhoods of Grand Center and Midtown St. Louis.

Lately there has even been an increasing amount of proposed and completed developments that either straddle or leap across the infamous “Delmar Divide”. Projects just north of Delmar like the North Sarah redevelopment (near Grand Center) are in the process of reconstructing a whole neighborhood, while proposals like the redevelopment of the former St. Luke’s Hospital into an incubator for non-profits hope to bridge racial and socioeconomic divides.

The billions of dollars in investment taking place between the Washington University Medical Center, Barnes-Jewish Hospital, and Cortex has caused a massive ripple effect across the central corridor. Multiple tower cranes are visible along the I-64 corridor and rising rents in the Central West End have even made neighborhoods like Forest Park Southeast (also known as “The Grove”) relatively high rent districts in a very short time.

All of these factors lead some to speculate that areas north of Delmar may be targeted for similar redevelopment due to increased development pressure from the Central Corridor. Fountain Park, Lewis Place, and Vandeventer are beautiful neighborhoods and it’s easy to imagine a future where large organizations like the WUMCRC (Washington University Medical Center Redevelopment Corporation) and Great Rivers Greenway partner with the SLDC (St. Louis Development Corporation) and large developers to bring the neighborhoods under the jurisdiction of a Park Central Development (www.parkcentraldevelopment.org) type entity.

Interestingly enough, Park Central Development may not need to take the reins alone. Recently, there has been a proposal to pass a special business district called the North Central Business District. According to their website (www.northcentralsbd.wordpress.com), the district’s proposed boundary are Finney Avenue on the north, Lindell Boulevard on the south, Taylor Avenue on the west and Vandeventer Avenue on the east, which situates it just east of the proposed “Kingsway” district. SBD Commissioners will be appointed by Mayor Krewson and approved by the Board of Alderman. 5 Commissioners must be owners of real property within the district and 2 members must be renters of real property within the district. In the past, special business districts and form based codes have been the precursors to rapid redevelopment (e.g. Forest Park Southeast).

Currently, the St. Louis LRA (Land Reutilization Authority) owns a significant amount of parcels in the Fountain Park, Lewis Place, and Academy neighborhoods. This could potentially be a good thing if future development is inclusive and does not aim to displace residents, but there is reason for concern. In recent years, the city of St. Louis with the help of the LRA, SLDC (St. Louis Development Corporation), and real estate developer Paul McKee used the power of eminent domain to displace citizens in favor of the $1.5 Billion dollar NGA (National Geospatial Agency) West Headquarters. Let’s hope this latest redevelopment effort does its best to bridge the “Delmar Divide” and not just push it further north.

Joshua is a behavioral health professional and special education teacher. He earned his B.S. in Urban and Regional Planning from Florida State University and a MEd in Special Education/Applied Behavior Analysis from the University of North Florida.