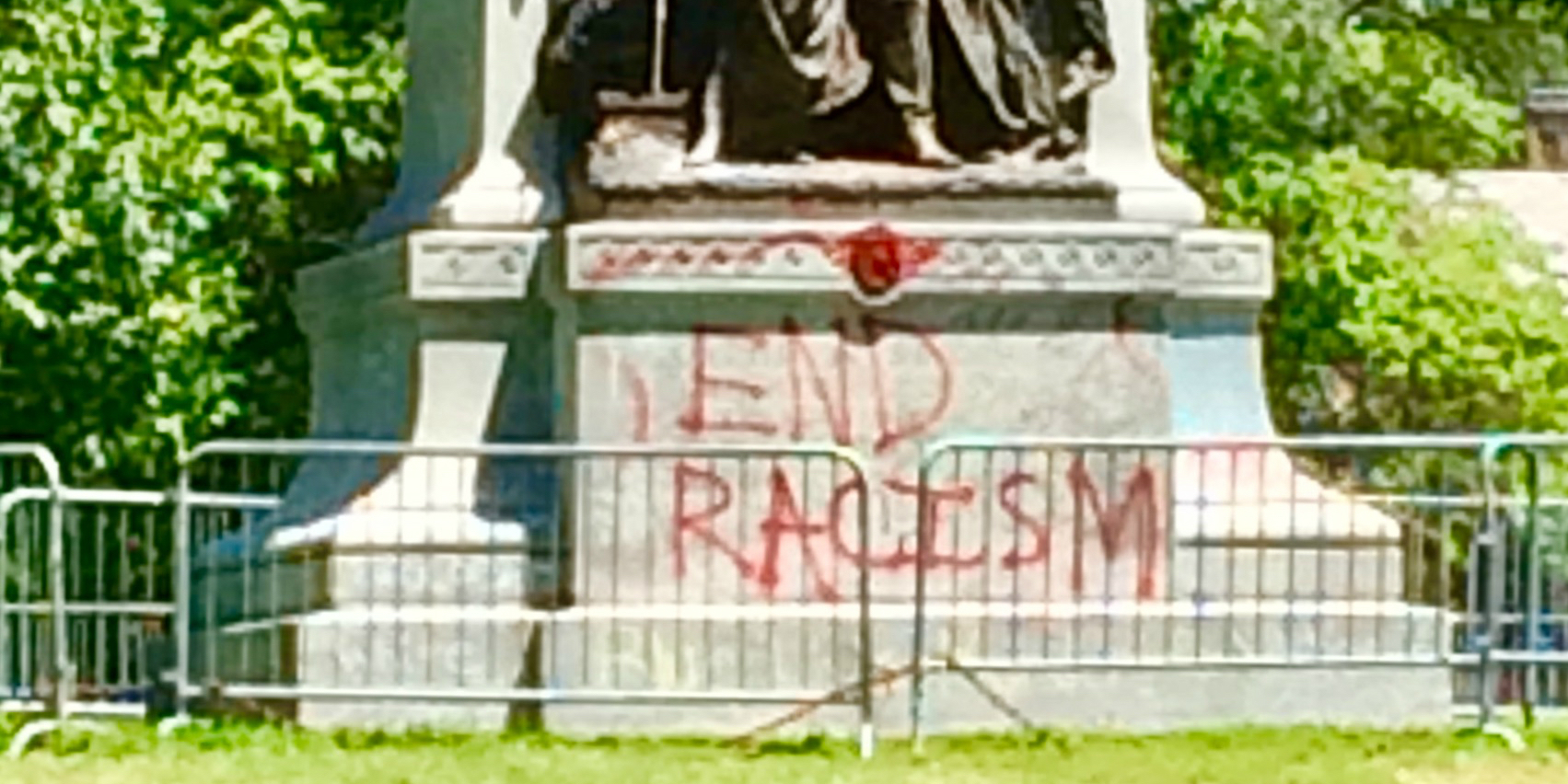 On the night of May 23rd, someone spray-painted the Confederate Memorial in Forest Park, a monument that depicts a white family sending a soldier off to fight in the Confederate war effort. The graffiti included an anarchist symbol painted over the soldier, a Black Lives Matter placard positioned behind the family’s heads, and phrases like “Stop Defending Injustice” and “This is Treason” on the monument’s base.

The St. Louis Parks Department was on the scene the very next morning removing the placard and scrubbing off the paint.

Two years earlier, in the wake of the June 2015 massacre at the Emanuel AME Church in Charleston, individuals spray-painted the Confederate Memorial in Forest Park. They wrote “Black Lives Matter” and “Fuck the Confederacy” on the base and splattered the inscription with red.

The next morning authorities scrubbed off the paint.

In both cases, graffiti is not beside the point, nor so readily scrubbed away. While the monument depicts white experience, that’s not all it depicts. Graffiti gives expression to the thing that, by its very absence from the monument, is shouting at us: the matter of African American experience, and especially the violence to which black lives under white supremacy have long been, and continue to be, subject. Leaving the Confederate Memorial in place, unscrubbed and unsanitized, with its graffiti in full view, would serve to “[right] the wrong image these monuments represent and [craft] a better, more complete future for all our children and for future generations,” the worthy goals cited by New Orleans Mayor Mitch Landrieu in his justification for the removal of four Confederate monuments in that city.

The well-intended impulse to bury such monuments, à la Mayor Landrieu, or to preserve them as museum artifacts, as some have proposed, is analogous to the misguided impulse to celebrate them. Thinking of the memorials and such graffiti together, removal has the effect of hiding black bodies and black trauma from public view.

We need graffiti. Indeed, to accomplish what Landrieu is calling for––taking the Confederacy off its “pedestal in our most prominent places of honor”––we need to acknowledge the trauma, rage and rejection graffiti expresses. Taking down a monument that represents toxic histories erases it as a site of living struggle, defeating historical understanding and full democratic ownership of the American past.

Yes, these monuments have a painful, even traumatic impact on many viewers; they represent a celebration of violence and white supremacy. But Black Lives Matter graffiti on a monument does more to advance public healing and understanding than no monument at all.

Healing requires not only a willingness to confront what the memorial represented in the past––the views and interests of defenders of the Confederacy––but also to interrogate the motives behind today’s frantic calls for removal. The stakes of St. Louis’s monument controversies and those of other cities such as New Orleans and Baltimore include the matter of who controls urban space, and how it is used. As terms like ‘defacing’ and ‘vandalism’ suggest, those stakes also concern the sanctity of public and private property. Officials who call for the scrubbing or relocation of such monuments mean not only to sanitize their city’s reputation, but also to discourage future ‘vandals’ from making claims. Their actions reveal an interest in maintaining urban public spaces as precincts of order, respectability, and uncontroversial history––which is to say no history at all.

The monument controversies sweeping the cities of the New South are fundamentally existential ones: they concern what anthropologist Mary Douglas called purity and danger. There is inherent risk in a public life in which memorials can become sites of political-historical engagement––where debate flows freely and authorities and citizens are willing to call into question sacred values of all kinds. We must ask: do the dreams of development in post-Ferguson St. Louis (as in post-Katrina New Orleans) mandate purification of public space and public memory, and foreclosure of ‘dangerous’ uses of either?

On Tuesday, May 30th, St. Louisans awoke to learn that the freshly-scrubbed Confederate Memorial had been marked again––this time with “End Racism,” “Black Lives Matter” and “Nat Turner Lives.” That night police patrolled the area and shined a high-powered spotlight on the monument, now surrounded with crowd control barriers––apparently an effort to prevent “vandalism” and other contentious activity at the site.

This cat-and-mouse game will soon come to an end: city authorities are preparing to remove the monument from the park. But we’re living through a classic moment of democratic disruption. St. Louis has had to attend to the matter of Confederate memory before it could continue the work of urban progress. It has had to ask itself: Is it the city that preserved the Confederate Memorial? Is it the city that removed the Memorial? Is it a city where ad hoc acts of public memory––including not only monument graffiti but also protest and graffiti at the Ferguson QuikTrip in the aftermath of Michael Brown’s death, and temporary memorials at the site where his body lay for hours on Canfield Drive––shape the stories of progress it can tell?

The Confederate Memorial, still intact at this writing, should be left alone, along with its graffiti: This does not represent capitulation to those who would celebrate the Confederacy, but rather an acknowledgment of the messy and violent histories embodied in such sites which will always defy efforts at either consecration or cleanup.