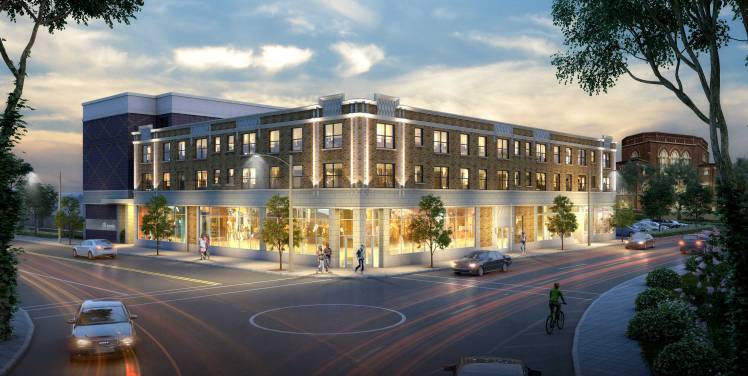 Coming soon to the NE corner of Grand and Holly Hills… Intrada. The much-anticipated renovation of a long neglected corner of our neighborhood is now underway. I posed some questions to Stacy Jurado Miller, Co-Founder and Supportive Housing Developer with the Vecino Group, the new owners of the property, to better understand their vision.

—
Q: What’s the history or meaning behind the name Vecino Group?

Vecino is the Spanish word for “neighbor.” The name of our company was rooted in our belief that human connection has the power to change the world. We liked “The Vecino Group” because both the words Vecino and Group spoke to the collaborative approach we seek in the development/design process and in the completed work. So far, it has been worth all the times we have to spell out “V-E-C-I-N-O” after people say, “The Casino Group?”

Q: When and why did you start Vecino Group and what was your first project?

The Vecino Group began in 2011. We say we started at the intersection of experience and idealism. Two of the founding members—Matt Miller and Kim Buche—both had decades-long experience in real estate development. The third founding member—me—contributed a passionate belief that housing could and should be a means to address social issues beyond housing. From day one, we wanted the Vecino Group to be about something more. Whatever we did, whatever project we went after, had to maximize the potential for positive impact. So if affordable housing was good, supportive housing for special needs populations was greater. If student living was good, rehabbing a historic building into a shared, sustainability-focused community was greater. By seeking greater, our growth got good. In the past five years, we’ve gone from three people to thirty. We’ve completed six developments and have five more under construction.

Q: What is your role in the business?

I develop affordable housing and more specifically, Special Needs/Supportive Housing. When people think of real estate developers, a Donald Trump-esque guy in a suit, fixated on the money, can be the stereotype. But for me, development is a means to create a better world. To be able to help end homelessness for veterans, or give kids aging out of foster care the home they’ve never had, or create a new beginning for survivors of domestic violence? That’s soul feeding stuff. And we’re often able to do that in tandem with preserving historic buildings and revitalizing neighborhoods. My role in the company is making sure that we hold firm to our founding mission and point of difference. There’s no shortage of developers out there creating housing. What sets the Vecino Group apart is why we do it. That translates directly to the finished product.

Q: What attracted you to the property where Intrada is being built?

It was the dream location! A stable neighborhood, across from a beautiful park, and surrounded by resources in walking distance. Each time we start a development, I probably look at anywhere from 5-10 prospective sites. There’s never been one as ideal.

Sometimes neighborhoods as nice as yours will fight against affordable housing. Alderman Villa and the Carondelet, Grand-Bates and Holly Hills neighborhoods deserve all the credit in the world for recognizing the potential of redevelopment and the need Intrada will serve for various members of your community.

Q: Can you tell us more about the mission of the Intrada project?

Intrada began with a desire to help create permanent supportive housing for youth aging out of foster care. As a country, we’re asking kids from the worst of circumstances to do what kids from the best of circumstances can’t do—be completely autonomous and without help once they turn 18. Statistics show it isn’t working. Youth who have aged out of foster care are more likely to become pregnant, incarcerated, or homeless. They’re less likely to complete college. Across the board, the numbers are bleak.

Together with Epworth Children and Family Services, we set out to create permanent supportive housing that would change the odds for these young people. Intrada will be an intergenerational affordable housing development with a 20% special needs set-aside serving youth aging out of foster care.  The remaining 80% of the units will meet the housing needs of the general qualifying population. With a unit mix of studio, one and two bedroom units, Intrada hopes to address the need for senior housing in the area( a priority of the neighborhood), while also serving family housing residents, in addition to the youth aging out of foster care. Additionally, Intrada will include six market rate units. This intergenerational approach will mirror the community at large, uniting age levels and life circumstances to create a truly integrated development. Epworth Children and Family Services will serve as lead referral agency and on-site service provider for supportive housing residents. Carondelet Community Betterment Federation will provide on-site services for all residents.

Q: Do you intend on expanding development in the St Louis area? Are there any future projects you can tell us about?

We do. We have an application out right now seeking Low Income Housing Tax Credits to redevelop the former Banneker School into housing. We’re also in the process of considering prospects for a funding round this fall.

Q: What success stories can you share in regard to previous projects Vecino has been involved with?

There are many but I’ll be biased and say that my favorite is right in St. Louis. Freedom Place at 4011 Delmar Blvd. It was a blighted and deserted historic building that sat vacant for a decade. Now it’s home to 68 of the most inspiring humans you’ll ever meet—formerly homeless veterans who have fought back against the obstacles that followed their service. Freedom Place is a partnership with St. Patrick Center and the Missouri Department of Mental Health. It’s a success story on every level. I’d encourage anyone who has concerns about Intrada to go check out Freedom Place.

Q: I’ve seen Matt’s work for many years in Springfield MO. Can you tell us how Vecino has impacted Springfield by your many developments in that area?

We’ve been lucky to be part of a community effort to revitalize historic buildings in Downtown Springfield and on Commercial Street. Any impact we’ve had has been shared with other developers, advocates, businesses and city leaders.

Q: What other cities do you have projects in?

We have completed developments in Springfield, St. Louis and Troy, New York. We also have a development under construction in Salt Lake City, Utah and another in the closing process in El Reno, Oklahoma.

Q: Do you have plans to expand into other locations in the future?

We do. You can’t change the world just working in Missouri.

Q: What do you love most about the location and the surrounding neighborhood(s)?

The corner of Grand and Holly Hills and the surrounding area seem to represent some of the things that make St. Louis special. The history, the architecture, the distinct feel to the neighborhoods, and the connection between the people—you don’t find that everywhere. It took three years to get Intrada funded. We submitted the deal to the Missouri Housing and Development Commission three separate times in three different locations. But all roads were definitely leading here. Intrada is going to be built exactly where it was meant to be.
—

Construction on Intrada began in February 2017. Demo will begin in March. Opening in early 2018. For additional information on Intrada, please refer to the PDF here: Intrada Lofts synopsis – Vecino Group

Images and information added by nextSTL: 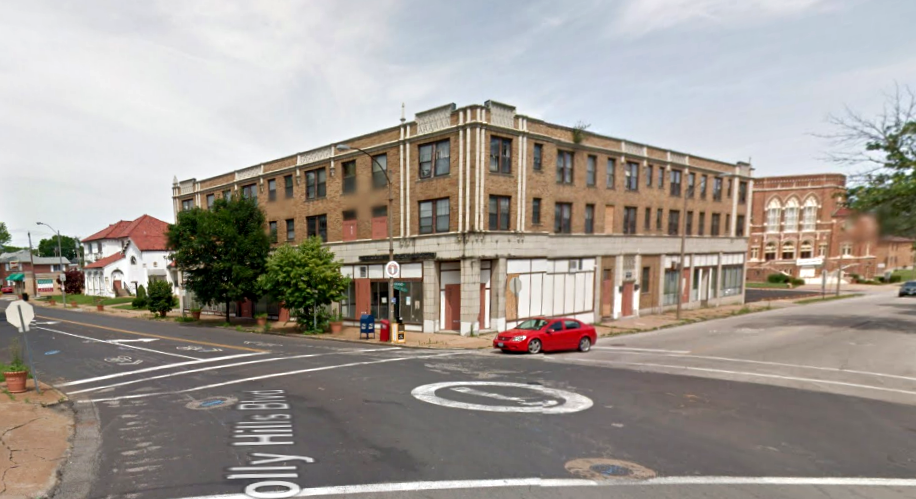 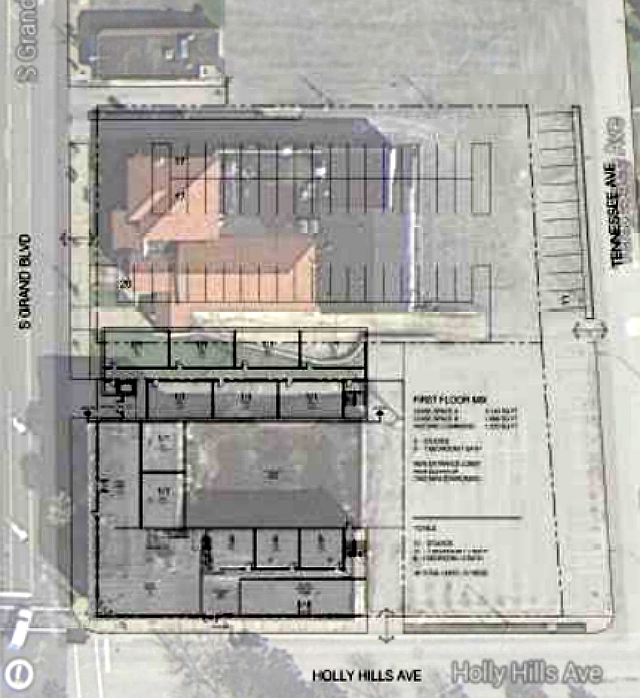 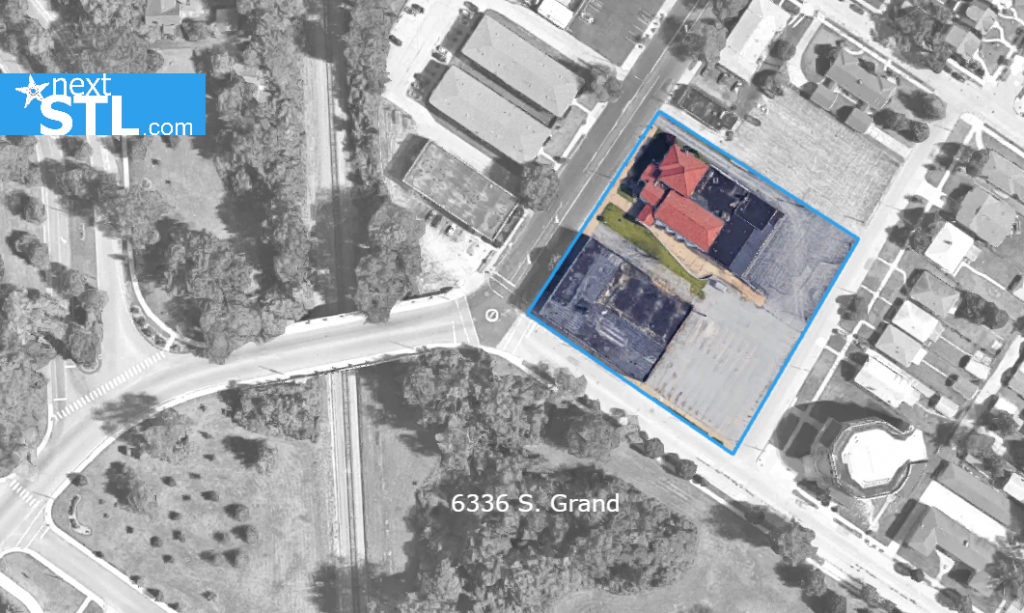 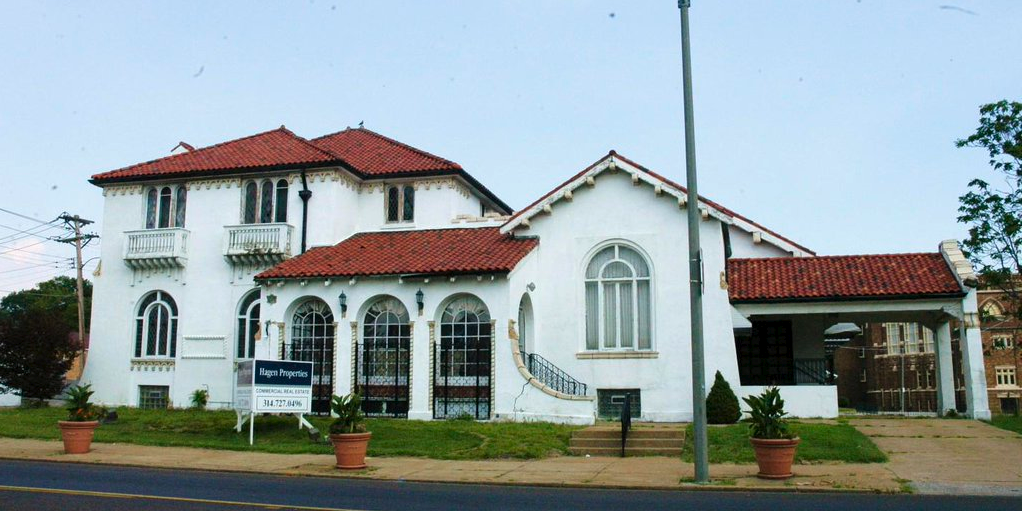 A circa 1928 apartment building located at 4011 Delmar in the city’s Vandeventer neighborhood has been rehabbed at a cost of approximately $6 million into 68 affordable apartments for formerly homeless veterans. The developer is the Vecino Group of Springfield, Mo. The development’s name is Freedom Place.

According to city records, the building has been vacant since at least 2002. A plan to convert the building into condominiums in the mid-2000s fizzled out, and the building sat empty and continued to decay. The five-story building is uniquely large for its host block of mostly single family homes and (now) vacant lots. It was constructed one year after a devastating tornado tore through St. Louis’s densely populated Central Corridor. Many builders at the time anticipated that demand for then-cleared lots would be significantly increased and so the builder of 4011 Delmar built much more densely than before.

Below is a recent photograph of the now-restored building: 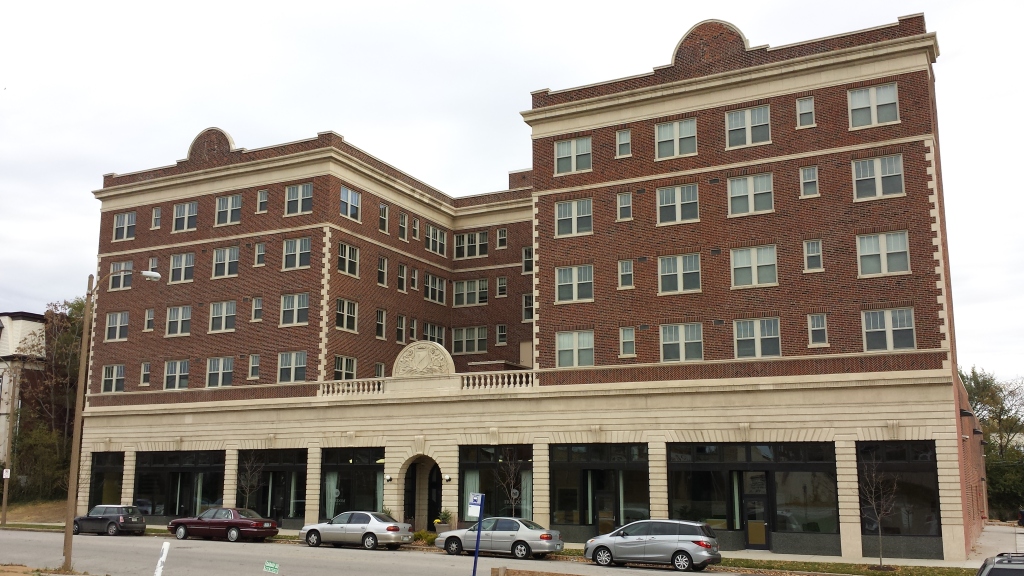 And here is a shot (from a different angle) of the building in its previously vacant state: