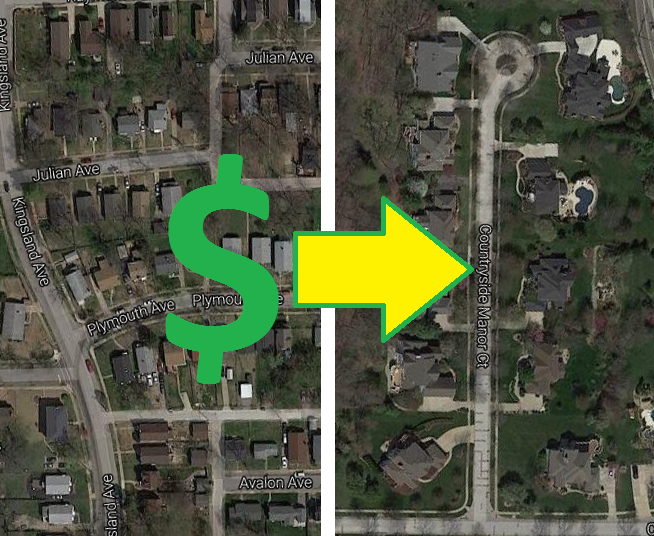 Take a look at your utility bills. Is there any charge related to the amount of infrastructure it takes to serve you? Does it take many or relatively fewer feet of wire to deliver electricity to you? Water pipe? Sewer pipe? Does it take a pumping station to get your sewage out of a valley? There is no frontage charge on our bills. So for the same amount of usage, households closer together subsidize households further apart. Let’s take a look at Missouri American Water, the company that supplies water to St. Louis County, with the exception of Kirkwood.

Missouri American Water has 4,200 miles of water mains and 31,000 fire hydrants in St. Louis County. Bills are calculated with the sum of a minimum customer charge based on water meter diameter and usage (MO American Water rates). 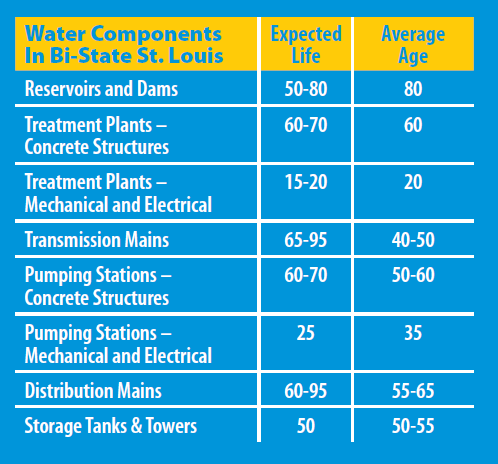 Our water infrastructure is aging. With so much needed to serve the spread-out places built after WWII now reaching end-of-life, the development choices of the past are coming home to roost today. Instead of paying into an infrastructure fund from day one to pay for its inevitable replacement, previous generations kicked the can to today.

According to the Our Aging Water Infrastructure report by the Metro Water Infrastructure Partnership, “About 70% of this is for indoor purposes such as showers, toilets, faucets, clothes washers, cooking, and food preparation while the remaining 30% is used outdoors.” We shouldn’t expect usage to be dominated by lot size. Household size is a bigger factor. So an infrastructure fee based on usage is a poor proxy for its cost. The same report says it costs $1M per mile to replace water mains. Let’s do the math and see who the winners and losers are in the ISRS rate structure.

The typical user is paying for 39 feet of watermain. This means the rate is too low and, for average use, the maker versus taker point is near the low end of house frontage in St. Louis County. Add on top the homes that don’t have a neighbor across the street, pipes with no customers on either side, and that a 100-year lifetime is on the high end, it’s likely the rate is much too low.

What might an ISRS rate based on frontage and that doesn’t kick the can to future generations be?
$95 per ft/100 years/12 months = 7.9 cents /mo /ft that is indexed with inflation of water main replacement costs. The household in Chesterfield would be paying $11.06 per month, and the household on Plymouth would be paying $2.37 per month.

Adding insult to injury, the makers have little say in the decisions to create more takers. When a city in our too-fragmented region zones for sparse land uses they are forcing others in other municipalities with no say in the decision to subsidize this choice. Once again we see how what happens on the other side of our municipal borders does indeed effect us.