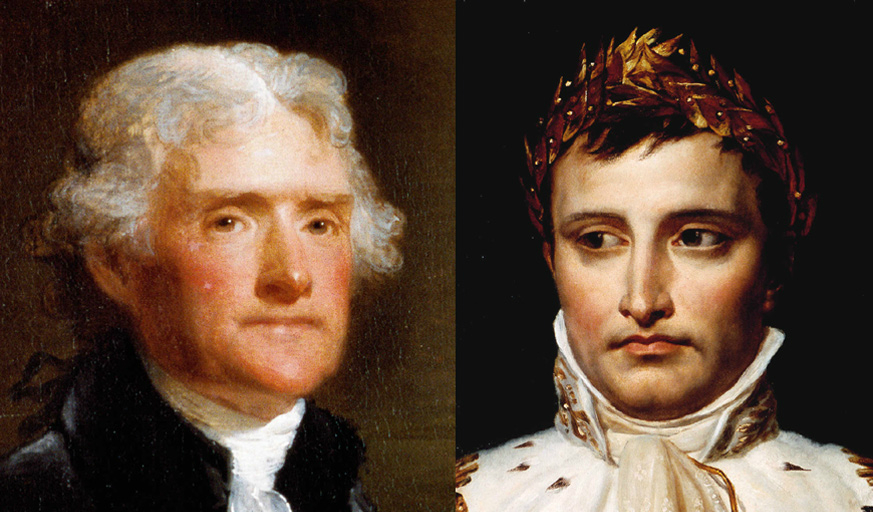 One-hundred- one years after the signing of the Louisiana Purchase Treaty in 1803, we celebrated our national expansion with a World’s Fair, the 1904 Louisiana Purchase Exposition. We extolled Jefferson and Napoleon equally at the fair with twice-life-size statues seated in chairs on 16-foot pedestals symmetrically poised on the Grand Basin at the base of Cass Gilbert’s Festival Hall. Famed sculptor Daniel Chester French, revered for his sculptures of Abraham Lincoln at the Lincoln Memorial and the Minute Man Statue in Concord, Massachusetts, carved the Napoleon statue. 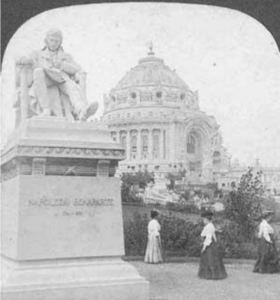 The Napoleon statue was made of plaster and was destroyed after the fair. But fortunately a ¼ scale model, created by Mr. French before sculpting the final statue, is preserved in a locked room on the second floor of the North wing of the Old Courthouse in downtown St. Louis. In October, Jefferson National Parks Association Assistant Curator Kathleen Moenster allowed me to view and confirm the model’s existence, and take a few photos.

In 1803 when Thomas Jefferson sent Robert Livingston and James Monroe to France to negotiate a peaceful purchase of land from Napoleon Bonaparte, Jefferson was only seeking New Orleans and portions of Florida. But Napoleon surprised Jefferson by offering all of Louisiana, 15 million acres of land West of the Mississippi River in the Missouri and Mississippi river watersheds, including St. Louis. Napoleon needed money for future wars, and his plan to defend New Orleans was scuttled by a slave rebellion in Haiti that decimated his French garrison there. So he sold all of Louisiana Territory and instantly doubled the size of The United States. 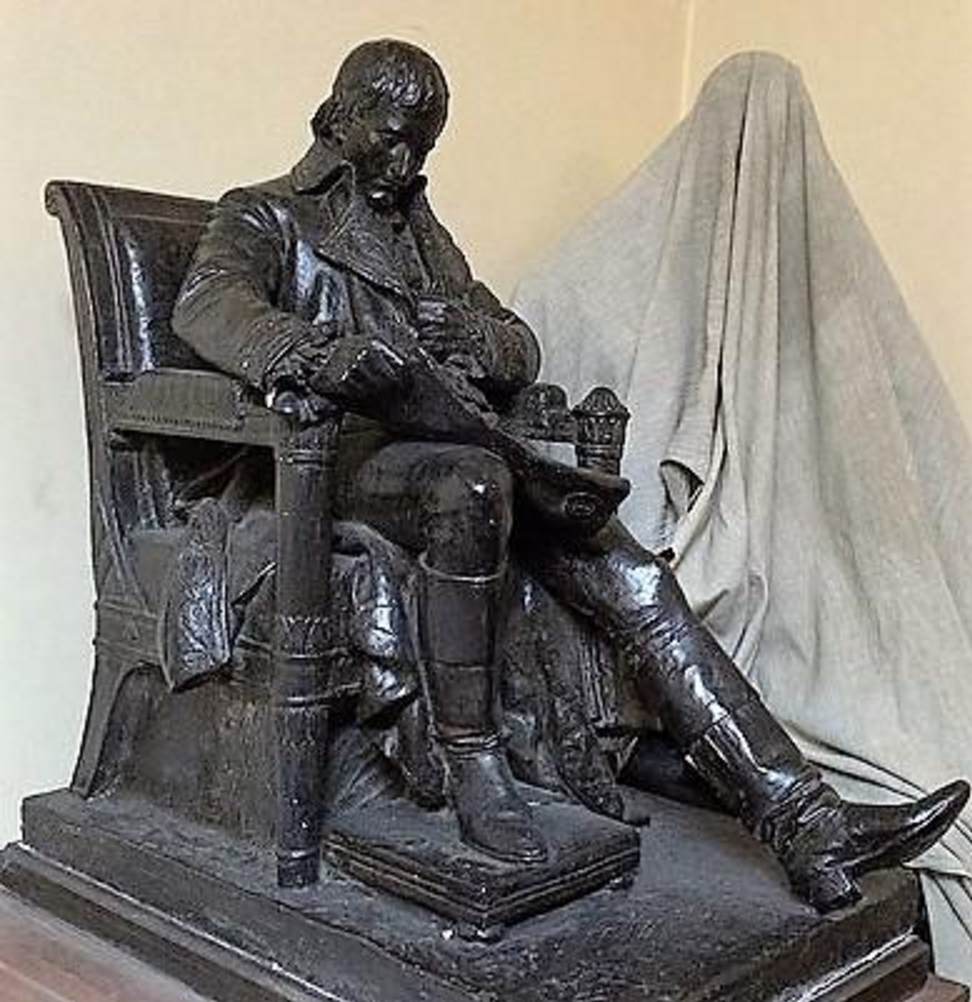 With expansion of the Museum under the Arch, we have an opportunity acknowledge Napoleon’s role in our history, and also resurrect a work of art by a great sculptor, by re-creating the full-size version of French’s World’s Fair Napoleon statue and placing it in a side vestibule of the new museum. To save cost, restoration experts could re-build the 11-foot- tall sculpture by scaling up the ¼ scale model using laser computer scanning and 3-D printers. The full scale model would be printed in pieces, then assembled and sheathed to look as if it was made from plaster or bronze. The Smithsonian created just such a duplicate statue of Jefferson using laser scanning and 3-D computer printing for a display at Monticello. 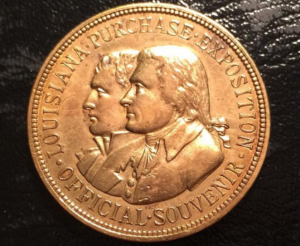 Back in 1904 St. Louis acknowledged, throughout the fair, the significant role Napoleon played in our national expansion. The World’s Fair souvenir coins featured profiles of both Napoleon and Jefferson. The pedestrian bridge (now rebuilt) that we paddle under today, to get from the Boathouse to the Grand Basin below the Art Museum, was called Napoleon Bridge during the fair.

The daily official program of the fair featured Jefferson and Napoleon equally on the back cover. Re-creating the full-size statue of Napoleon would remind visitors and St. Louisans of our French connections. In 1673, Frenchmen Pere Marquette and Louis Jolliet were the first Europeans to view the bluff where the Arch stands today as they descended the upper Mississippi River. And in 1764 Frenchmen Pierre Laclède and René Auguste Chouteau founded St. Louis and named the city after French King Louis IX.

The oldest building in St. Louis City is named the Basilica of St. Louis, King of France, (the Old Cathedral). Soulard and Lafayette Square are venerated St. Louis neighborhoods where Mardi Gras and Bastille Day are celebrated today. City Hall is based on the City Hall in Paris, and Powell Symphony Hall lobby is modeled after the Hall of Mirrors at The Palace of Versailles.

Several historical French heritage sites are within an hour’s drive of St. Louis including Cahokia’s French colonial log structure Holy Family Church constructed in 1799, Fort de Chartres State Historic Site near Prairie du Rocher, and the town of Ste. Genevieve named after the patron saint of Paris. Kaskaskia Island is home to the Liberty Bell of the West, a gift to Illinois Territory from King Louis XV of France in 1743, making it older than the one in Philadelphia. 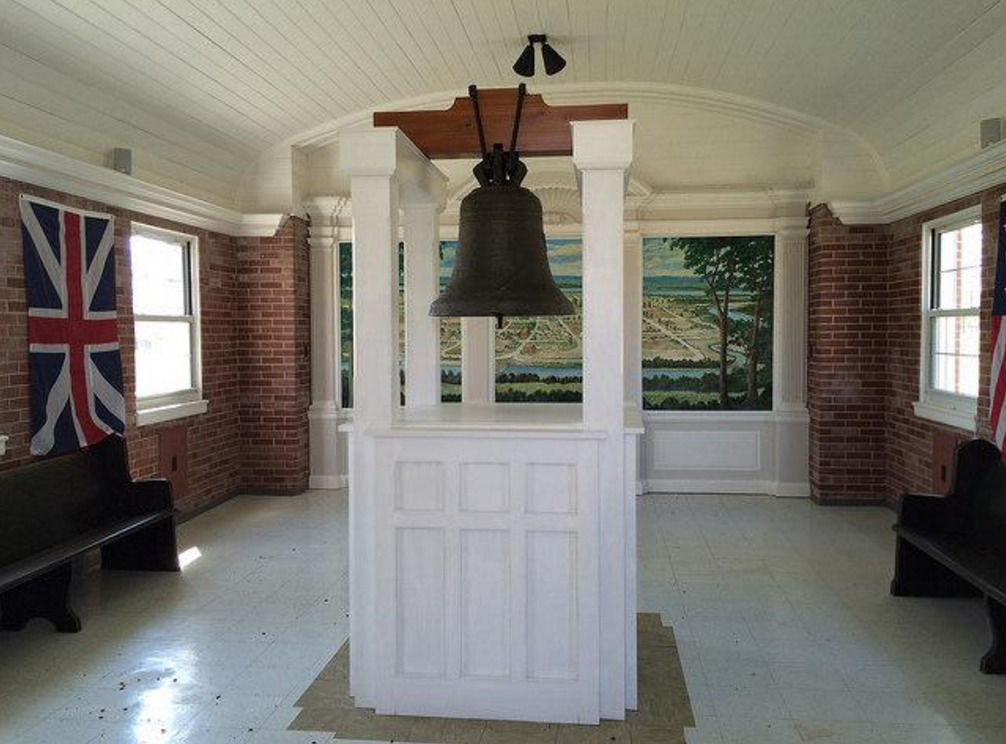 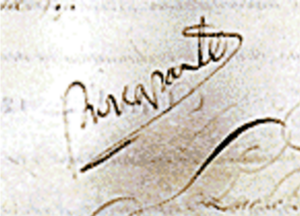 If the National Archives could assure themselves that the documents would be safely preserved here, the new Gateway Arch Museum would also be the ideal location to permanently display the original Louisiana Purchase Treaty documents. These documents are essentially the Declaration of Independence from Europe for most Western States. One of the documents contains Napoleon’s Bonaparte’s signature. Daniel Chester French’s full-size statue of Napoleon alongside Napoleon’s Louisiana Purchase Treaty signature could make the combined display a must-see attraction for anyone visiting St. Louis.

While it is proper to primarily honor Thomas Jefferson at the Arch Museum for his bold proposal to choose cash instead of military force to expand America, it is also appropriate to remember the historical role that Napoleon played in our ancestors’ path to becoming citizens of the United States. The designers of the displays in the expanded museum under the Arch should consider a full-scale re-creation of Daniel Chester French’s magnificent statue of Napoleon Bonaparte to serve as that reminder.

Photo of 1904 World’s Fair Statue of Napoleon.
Celebrating The Louisiana Purchase
The photo is in the public domain.
St. Louis Public Library
http://exhibits.slpl.org/lpe/data/lpe240024389.asp?Image=65849017

Photo of current-day bridge across the lagoon at Forest Park where the Napoleon Bridge stood.
Photo taken by Gary’s wife Karen Kreie, April 23, 2016, and was given to Gary Kreie for use in this commentary.
Gary Kreie owns the original photo in digital format
Gary Kreie has permission from Karen Kreie to hereby make this photo available for publication without attribution.
https://flic.kr/p/GujMtY

The back of the Daily official program of the St. Louis World’s Fair
Celebrating The Louisiana Purchase
This photo is in the public domain.
St. Louis Public Library
http://exhibits.slpl.org/lpe/data/lpe240023042.asp?Image=240037270

Signature of Napoleon Bonaparte on one of the Louisiana Purchase Treaty Documents
The image comes from National Archives and Records Administration website and is in the public domain.
http://www.archives.gov/exhibits/american_originals/loupurch.html